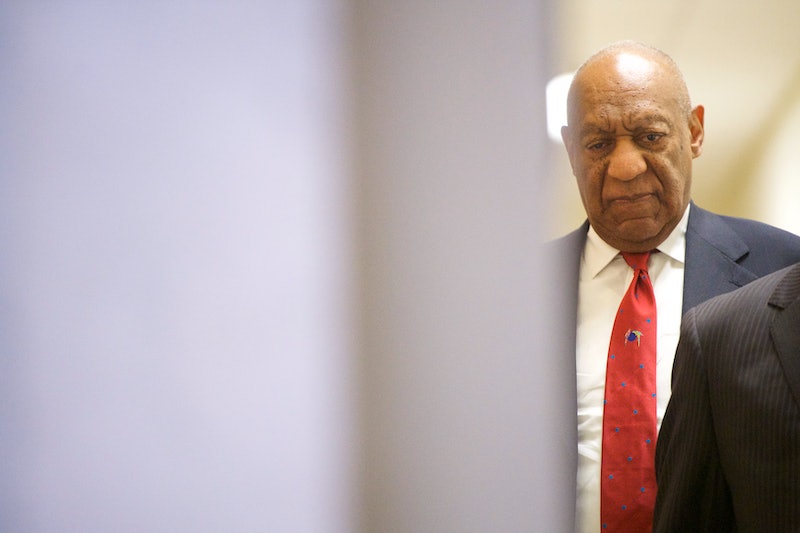 Once beloved as one of America's favorite TV dads, actor and stand-up comedian Bill Cosby was found guilty of drugging and sexually assaulting a woman Thursday. The verdict means the 80-year-old actor could spend the final years of his life in prison. But exactly how much time could he face? Bill Cosby's prison sentence could span up to 30 years.

Although some 60 women have publicly accused Cosby of sexual assault — allegations his legal team has vehemently denied — he only faced criminal charges in the case of Andrea Constand, who claimed the comedian drugged and molested her at his home back in 2004. In a statement Constand gave to police when she first reported the incident in 2005, she alleged she'd gone "in and out" of consciousness after taking pills Cosby had offered her. Constand told police she "was unable to speak" and thus could not tell Cosby "no" as the comedian allegedly fondled her breasts and genitals.

Cosby was charged with three counts of aggravated indecent assault against Constand in December 2015, roughly 10 years after the incident had first been reported and just days before the statute of limitations deadline was set to run out. Although Cosby has yet to be sentenced, he faces up to 10 years in prison for each of the three counts he was found guilty of Thursday. However, those sentences could be served simultaneously The New York Times has reported, meaning the actor would could potentially only serve 10 years.

Although Montgomery County district attorney Kevin R. Steele reportedly asked the judge presiding over Cosby's trial to revoke the actor's $1 million bail on the grounds he was a flight risk, the judge ruled Cosby could remain free pending his sentencing, according to The New York Times. Multiple media reports claimed Cosby, who has sat quietly during much of his trial, shouted at Steele when the Montgomery County district attorney attempted to argue that Cosby owned a private plane he could easily use to flee. "He doesn't have a plane, you *sshole," CNN and The Times both reported Cosby shouted in the courtroom.

While the judge ultimately ruled Cosby could remain free on bail, he did order the actor to surrender his passport and remain at his home in Pennsylvania until the sentencing. According to CNN, the judge also ordered Cosby to be fitted with a tracking device.

One of Cosby's lawyers, Thomas A. Mesereau Jr., said The Cosby Show star would appeal the jury's verdict. "We are very disappointed by the verdict," Mesereau said, per The Times. "We don't believe Mr. Cosby is guilty of anything." Cosby did not acknowledge reporters or the crowd gathered outside the courthouse apart from the thumbs-up he gave as his car pulled away.

Although Cosby did not take the stand at his trial to testify in his defense, he and his legal team have maintained that his relations with Constand were consensual. In a statement he provided police in 2005, Cosby admitted to "petting and the touching of private parts," but denied Constand's allegations the activity was not consensual. Cosby has also maintained that he only gave Constand Benadryl.

According to the Associated Press, Cosy is expected to be sentenced in 60 to 90 days' time, although a sentencing hearing has not yet been scheduled.

Bill Cosby Ranted & Cursed After His Guilty Verdict Was Read

This One Tweet About Bill Cosby's Guilty Verdict Will Floor You

These Quotes From Bill Cosby's Accusers Will Give You Chills