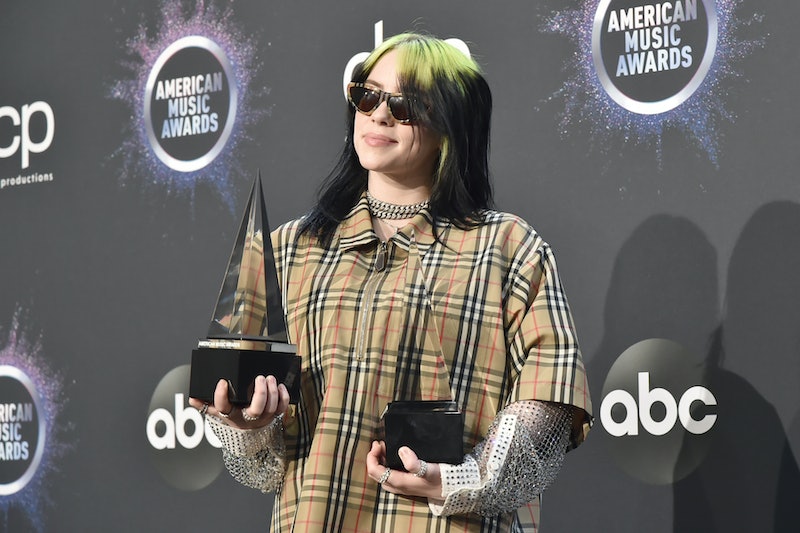 Billie Eilish has had platinum hair. She has had blue hair. She has even had gray hair. But now, she may just have her most shocking color ever. Billie Eilish is a brunette in her new "Xanny" music video, and given the singer's penchant for colorful hair, seeing her locks dyed brown is certainly a surprise even if the color does look great.

2019 has been a major year for Eilish. Not only did the singer- songwriter win the award for Best New Artist at the American Music Awards, but she's just been nominated for six Grammys including Song of the Year, Record of the Year, and Album of the Year. To top all of that off, on Dec. 5, she made her directorial debut — brunette hair and all — with the music video for her song "Xanny."

In the video, Eilish sits on a cream-colored park bench set against a tile background and sings the lilting melody of her song as hands slowly move into frame to put out cigarettes on her face. While the singer's signature baggy hoodie and oversized track pant look is replaced in the video with a fitted pair of cream trousers and a mock neck sweater, it's Eilish's brunette hair that is the most surprising part of her look in her directorial debut.

While Eilish's new brown locks are a stark contrast to the lime green roots she had been rocking as of late, the star coloring her hair isn't something her fans are likely to be shocked to see. The "Bad Guy" singer has gone through a multitude of hues since she began rising to stardom all the back in 2016 with her viral hit "Ocean Eyes."

Perhaps the color she's most known for, though, is blue. Eilish has had multiple iterations of the color from a bright, almost royal tone to turquoise to a steely color. In an interview with Buzzfeed, however, she revealed that her signature blue locks weren't exactly something she loved.

In the interview, Eilish is adorably surrounded by puppies as she explains that despite her hair color at the time, blue is her least favorite color. In fact, she never even made the connection that she had blue hair. She says in the video, "I had blue hair, but I didn't think I was someone with blue hair. I just thought I had blue hair, and I was me."

Now, Eilish is multiple degrees of hair separation away from that famous blue. Her hair has gone from all black to the home of neon roots, and now to brunette. While the brown hue from her "Xanny" music video may be her most low key color, it also likely won't last long given her hair changing history.