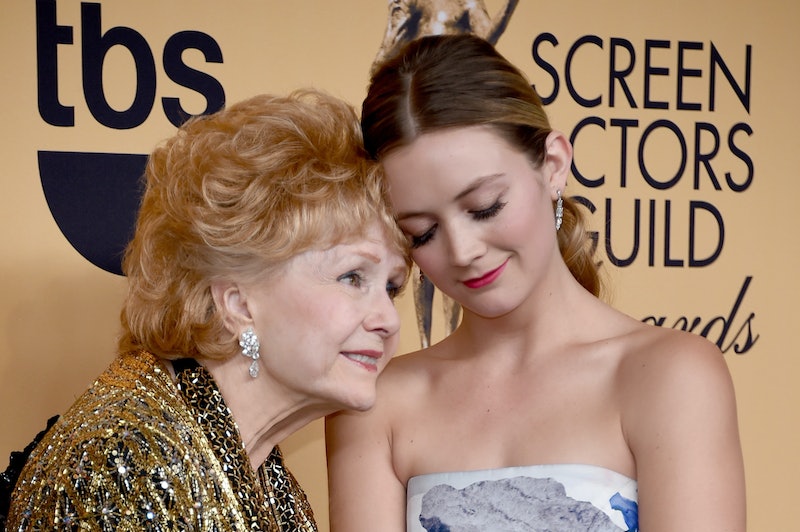 Get ready to see what might be the most touching instance of typecasting to ever hit the silver screen when one classic sitcom returns to TV this fall. According to Deadline, Billie Lourd will play Debbie Reynolds' granddaughter on Will & Grace in the show's final season, as a tribute the late actor and her impact on both the show and Hollywood itself.

19 years ago, Reynolds earned an Emmy nomination for her performance as Bobbie Adler, the mother of Debra Messing's character, Grace. Over the years, the show also introduced Grace's older sister, played by Mary McCormack, and Lourd will now appear in one episode as Fiona, Grace's niece. In the episode, according to Deadline, Fiona will arrive at Grace's New York apartment in order to attempt to reconnect with her "cool aunt," in the wake of Bobbie's death.

This will be the second time the Will & Grace revival has paid tribute to Reynolds since her death in December 2016, after an episode which showed Grace returning to her family home in order to deal with her mother's passing. "The episode is especially meaningful because of Billie’s relationship to the show," Will & Grace creator Max Mutchnick told the outlet. "We’re thrilled to have Billie. And best of all — she’s really good."

Lourd has credited her legendary acting family with inspiring her to pursue a career in Hollywood, though she admitted to Town & Country in 2017 that she has felt a great deal of pressure being Reynolds' granddaughter and Carrie Fisher's daughter. "I’ve always kind of lived in their shadows, and now is the first time in my life when I get to own my life and stand on my own. I love being my mother’s daughter, and it’s something I always will be, but now I get to be just Billie."

Still, Lourd revealed that she wants to continue to uphold her family's legacy: "It’s a lot of pressure, because she had such an incredible legacy, and now I have to uphold that and make it evolve in my own way." Will & Grace isn't the only opportunity Lourd has to pay tribute to her family though her roles; In 2015, she was cast as Lieutenant Kaydel Ko Connix in Star Wars: The Force Awakens alongside Fisher, who was reprising her role as Gen. Leia Organa. Though she originally read for the part of Rey — which went to Daisy Ridley — Lourd told Ellen DeGeneres in 2017 that she was grateful to get to work with her mother on the blockbuster franchise before Fisher's tragic death in December 2016.

"It was incredible," she said of her role, which has gotten bigger with each subsequent installment. "I’m a big believer in things happening for a reason and I think I ended up in that movie for a reason. It was really incredible for us to have that experience together."

In fact, the experience has been so touching that director JJ Abrams revealed that Lourd actually requested that Lt. Connix have scenes with Leia in Star Wars Episode IX. "I purposely had written her character in scenes without Carrie, because I just didn’t want it to be uncomfortable for her," Abrams told Vanity Fair about the new Leia scenes, which were constructed using cut footage from The Force Awakens. Instead, Lourd told the director, "'I want to be in scenes with her. I want it for my children when I have kids. I want them to see.'"

Between her work in Star Wars and now on Will & Grace, it's clear that Lourd is doing all she can to keep her mother and grandmother's legacies alive, and getting a chance to follow in their footsteps as she continues to build a legendary career of her own.