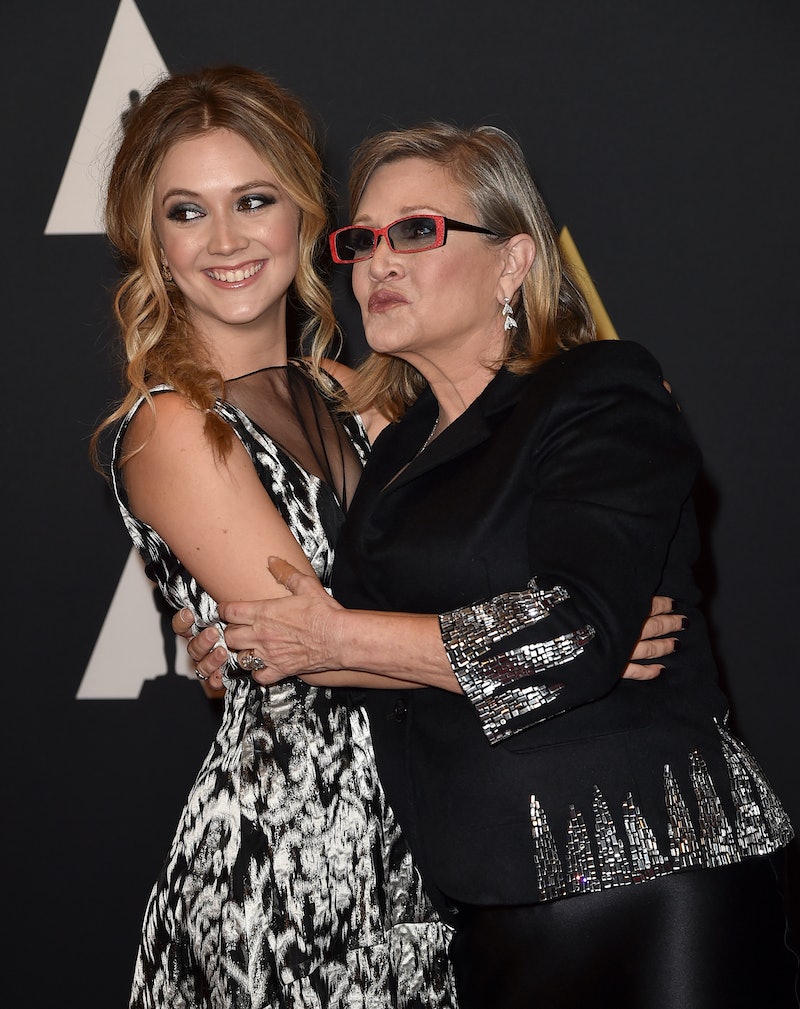 Over the weekend, many celebrities celebrated Mother's Day with their families, but one pointed out how different the day can be if your mother isn't there to celebrate with. On Sunday, Billie Lourd shared a post about Mother's Day emotions that aren't necessarily happy along with a photo of her mom, Carrie Fisher, and it's a reminder that the holiday can mean a lot of different things to different people.

The photo featured Fisher in her kitchen, holding up a can of baked beans, and Lourd wrote out "Happy Mother's Day" in emojis — her mom's signature way of communicating on the internet. In her caption, she continued:

It's hard to imagine what Mother's Day must be like for Lourd since losing Fisher, but she makes a good point that it's not always a happy day. Even for people whose mothers are still alive, the relationships between mothers and their children can be a complicated one — and that only scratches the surface when it comes to the list of reasons why Mother's Day might not be happy for someone. It's not always as simple as sending a card and flowers or taking your mom out to brunch.

Last Mother's Day, Lourd also acknowledged that Mother's Day wasn't easy for her — or many other people out there.

"This one goes out to anyone having a less than perfect Mother’s Day today," she wrote. "We are not alone. Sending all my love and strength to anyone who needs it."

It's been more than two years since Fisher died at 60 years old after having a massive heart attack while on a flight from London to Los Angeles in December 2016. It's still hard to believe that the Star Wars star is gone, but Lourd has been keeping her memories of her mother alive on Instagram, where she often posts photos of her.

On the anniversary of Fisher's death last year, Lourd posted a video of herself playing "These Days" by Jackson Browne on her mother's piano, since singing was something that she and Fisher loved to do together. Lourd wrote:

"I’ve found that what keeps me moving is doing things that make me happy, working hard on the things that I’m passionate about and surrounding myself with people I love and making them smile. I hope this encourages anyone feeling a little low or lost to 'keep on moving'. As my Momby once said, 'take your broken heart and turn it into art' - whatever that art may be for you."

Mother's Day is the perfect time to tell the mothers (or motherly figures) in your life how thankful you are for them, but it's also okay if it's a difficult or weird day for you. Lourd's post is a perfect example of some of the feelings that the holiday can bring out in people, and none of them are the wrong ones to have.

More like this
Dixie D’Amelio & Noah Beck “Love Each Other” Despite Breakup Rumors
By Julia Emmanuele, Jordyn Tilchen and Grace Wehniainen
The Try Guys Cheating Scandal, Explained
By Grace Wehniainen
Everything To Know About Taylor Swift’s 10th Studio Album, 'Midnights'
By Grace Wehniainen and Jake Viswanath
Hailey Bieber Just Responded To *That* Viral Met Gala Moment
By Radhika Menon and Sam Ramsden
Get Even More From Bustle — Sign Up For The Newsletter