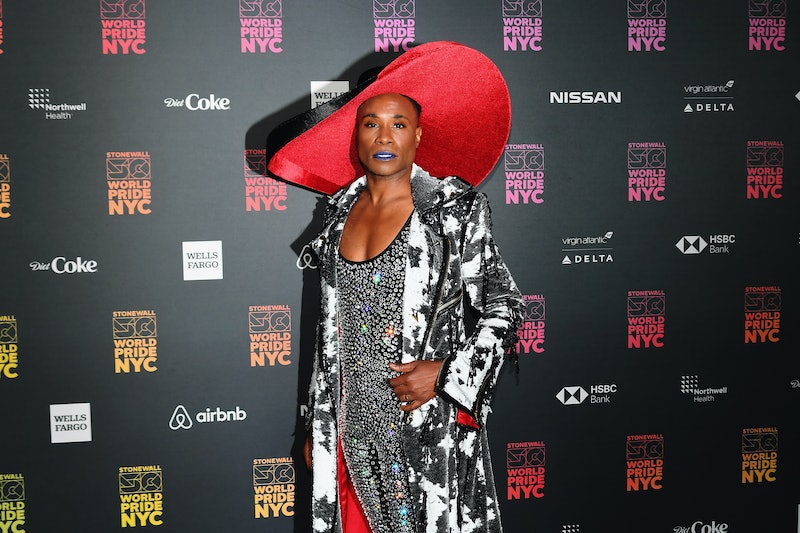 It was another unforgettable M-O-M-E-N-T in a year already full of unforgettable fashion moments for a budding fashion icon. Billy Porter wore a rainbow dress to the WorldPride Parade in New York City on June 30. It was everything you hoped it would be, since the actor has been making major sartorial statements every time he has stepped foot on a red carpet in 2019. From his gold-dipped Met Gala outfit to his black velvet Oscars tuxedo gown to his red and pink Tony's outfit that was created from an actual Broadway theater curtain, Porter uses fashion to make important points. His WorldPride look will go down as one of his best ever.

Porter's rainbow gown was a custom Christian Siriano design. Siriano was also the architect behind Porter's aforementioned tux dress hybrid from the Academy Awards. The pair, along with Porter's stylist Sam Ratelle, have forged a fabulous fashion partnership.

Porter's Pride Parade gown was a simple but profound symbol of his identity, featuring a high, ruffled neck and a removable sash that boasted the phrase "Grand Marshal 2019: The Cast of Pose," according to Vogue. The bright tulle frock had an epic train that flowed around Porter. The material had an airy quality to it, which was an excellent complement to the proud and powerful statement that the colors made.

Porter paired the frock with a pair of peep-toe platform heels. His entire presentation was memorable, but that's been the case with everything he has worn lately. His Pride Parade ensemble is something he could totally repurpose and re-wear to any upcoming Hollywood red carpet since it was so glamorous and so couture.

Porter shared a shot while wearing the dress on his personal Instagram feed. He captioned the image, "Cheers to the family we make, the love we spread, and the acceptance we continue to fight for... oh and all while looking FIERCE doing it. Who's with me?"

How could anyone be anything but with Porter?

Siriano also shared an image of himself working on the dress while on the mannequin form, summing up his colorful creation in a simple but beautiful way. He wrote, "Creating magic for an icon." That is precisely what happened here. The dress was indeed a magical moment for Porter, who has quickly earned his status as a fashion icon for breaking down barriers, challenging outdated style norms, and getting people talking when it comes to his outfits. For Porter, fashion is always an agent of change.

"My goal is to be a walking piece of political art every time I show up," Porter wrote in an essay for Vogue about his fashion choices and why he opted to wear a dress to the Oscars. "To challenge expectations. What is masculinity? What does that mean?" He also explained that he was blown away by the reaction he received to the pink cape that he had worn to the 2019 Golden Globes. That response inspired him to continue to use his platform for change by harnessing the power of fashion and by forcing people to think.

Billy Porter is well on his way to becoming not only one of the best-dressed people of 2019 but of the modern era as a whole. His instantly iconic WorldPride rainbow dress is all the proof you need.

More like this
Kylie Jenner Wore A Stunning Corset Dress For Paris Couture Week
By Dominique Norman
Kylie Jenner Rocked A Very Kim Kardashian-Esque Outfit At Couture Week
By Allie Fasanella
'Love Island' Tanyel's Latex Versace Dress Was Gifted By A Former Islander
By El Hunt
Jennifer Lopez Wore A Naked Dress To The Shotgun Wedding Premiere
By Dominique Norman
Get Even More From Bustle — Sign Up For The Newsletter
From hair trends to relationship advice, our daily newsletter has everything you need to sound like a person who’s on TikTok, even if you aren’t.