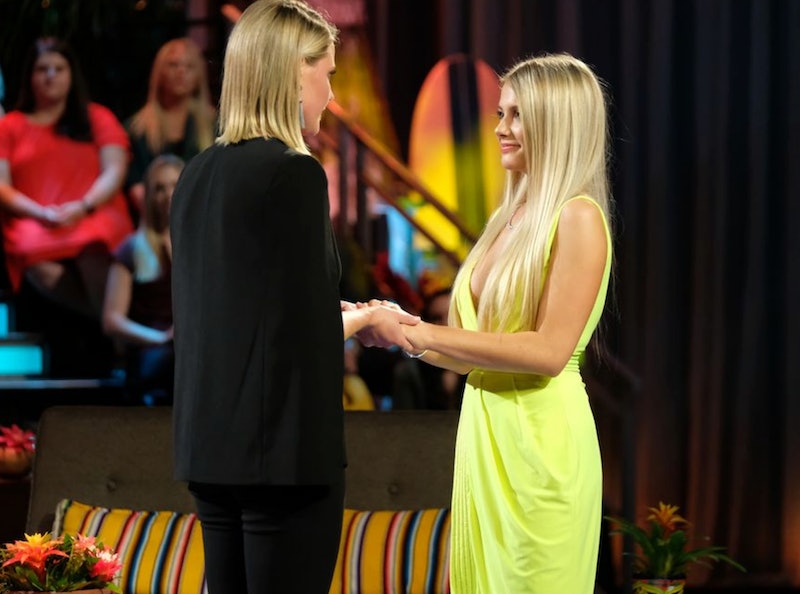 Bachelor in Paradise couple Demi Burnett and Kristian Haggerty seem to still going strong, despite not all over each other's social media accounts. When speaking with Us Weekly on Wednesday, Oct. 9, Demi confirmed she and Kristian have not split up, adding, "Just because we don’t broadcast it doesn’t mean that we’re not together.”

“Every relationship is different and it’s like — I mean in the most respectful way — it’s nobody’s business how our relationship works," Demi told Us Weekly. She also went on to say that, contrary to what their IG feeds may suggest, they do spend time together.

Demi and Kristian have not appeared in each other’s Instagram grids for nearly a month, and Bachelor viewers have noticed. Some of the comments on Demi’s recent posts include things like “Never see Kristian in any pictures,” “It seems like you and kristian aren’t together anymore,” and “@demi_not_lovato just curious I’ve noticed in some pics recently your not wearing your engagement ring just making sure all is good with you and @kristianhaggerty.”

When Kristian shared a photo with former America’s Next Top Model contestant Alexandra Agro on Instagram earlier this week with the caption “Couldn’t do this crazy life without ya,” some members of Bachelor Nation sounded the alarm bells. "That's not Demi? Are you dating someone new?" one asked in the comments. Another wrote, "I think I missed something??? Are you not with @demi_not_lovato."

But, as other fans noted on the IG post, Kristian has been friends with Alexandra and her twin sister, Catherine Agro, for a long time. To bring it all full circle, Catherine and Demi were both contestants on Colton Underwood’s season of The Bachelor. While Demi was in New York for the Dick's Sporting Goods runway show on Wednesday, Kristian was celebrating Alexandra and Catherine's birthday in Florida.

When speaking with Us Weekly on Wednesday, Demi said she and Kristian are "definitely just dating right now" and "taking [the relationship] at a steady pace." She also noted that they have not jumped into wedding planning mode because they do not want to rush anything and are currently "enjoying [their] time together."

On Bachelor in Paradise Season 6, Demi shared that she started seeing a woman named Kristian before heading to Sayulita. She told her castmates and the viewers at home that even though she still had feelings for Kristian, she chose to go to Paradise because, as she explained to costar Katie Morton, "I'm trying to figure out stuff about myself and see if maybe I was just, you know, so in it with her because I wasn't talking to anybody else and investing all my time with her." Though she and Derek Peth seemed to hit it off, Demi realized her heart was still with Kristian.

Rather than send Demi home, Bachelor in Paradise brought Kristian to the beach. For the first time in franchise history, a same-sex couple was not only featured on a Bachelor show, but got engaged during the season finale. They have not posted about each other on IG since Sept. 19, but as Demi assured Us Weekly in the aforementioned interview, that does not mean there is trouble in Paradise.

Some Bachelor couples are into documenting everything they do together for social media. Demi and Kristian, on the other hand seem to be doing what works for them.

More like this
Bachelor Nation's Blake Horstmann Is Dating 'Love Is Blind' Star Giannina Gibelli
By Jake Viswanath and Radhika Menon
'Bachelor In Paradise' Finally Announced Its Season 8 Release Date
By Kadin Burnett and Grace Wehniainen
Only 3 Of The One That Got Away Couples Seem To Still Be Together
By Brad Witter
Howard Stern's Net Worth: Is He The Richest Man In Radio?
By Hugh McIntyre
Get Even More From Bustle — Sign Up For The Newsletter