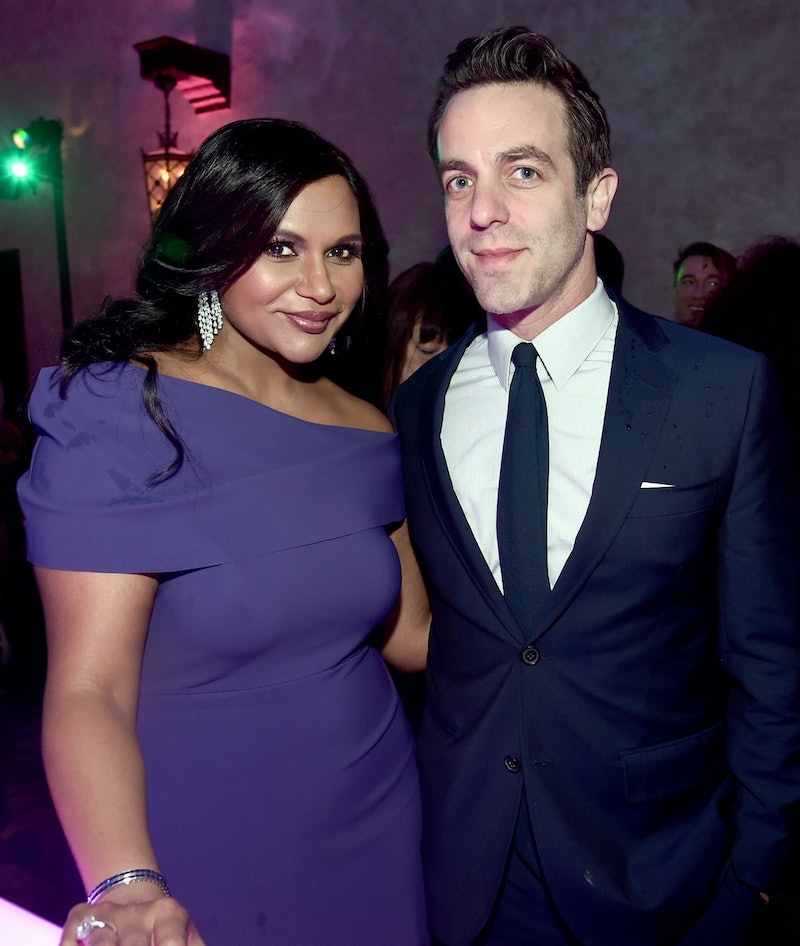 Kelly Kapoor and Ryan Howard fans, get ready to feel all kinds of emotions. B.J. Novak posted a photo from Mindy Kaling's birthday that is causing a stir on social media amongst Office fans — and for good reason. Let's just say that the way Novak stares at Kaling in the picture is making people's hearts flutter.

Kaling celebrated her 40th birthday on Monday. The Late Night star and writer announced on social media that she was celebrating with friends, which included her good friend and former Office costar, Novak. He was kind enough to share a picture of the two the next day, June 25, on Instagram from her party. He didn't caption the photo, but let it speak for itself.

The image adorably shows Novak in the background as Kaling holds her birthday cake, which featured a picture of the actor giving a thumbs up. Well, The Mindy Project creator couldn't help but pose for the photo by mimicking the cake's image and giving a thumbs up. The best part of the Instagram is how Novak's staring at his friend as she's photographed. The way he's looking at her is probably completely innocent. He could very well just be very happy celebrating his dear friend's birthday. However, some fans are reading into his stare, especially those who really want Kaling and Novak to be a couple already.

Of course, Novak's followers couldn't help but comment on his Instagram, all while speculating that there absolutely has to be some type of romantic chemistry between the two — at least on Novak's side. Some even went as far to declare, "Can you guys get married already."

Some of the other comments included one person passionately writing, "SOMEONE LOOK AT ME LIKE RYAN LOOKS AT KELLY. "Another Instagram use wrote, "Get u a man that looks at u the same way bj looks at mindy." Oh, and there's also this comment that Office fans will greatly appreciate, especially Michael and Holly 'shippers: "Yessss, soup snakes." In the Season 5 finale of the NBC comedy, Michael accidentally and hilariously referred to himself and Holly as "soup snakes." He really meant "soulmates."

A few other comments shared on Novak's post read, "The way you still look at her though," "I knew Ryan always loved you," and "The look....of love."

As everyone knows, the Ocean's Eight actor and Novak once had a complicated romantic relationship a long time ago and have maintained a tight-knit friendship ever since. Whenever Kaling and Novak have any type of encounter, fans either believe they're actually dating or hope that one day they will finally get together.

They have both repeatedly stated they're just friends. While chatting with GoodHousekeeping.com in May, Kaling admitted she totally gets why fans believe they're a couple. She even revealed Novak is an important figure in her daughter Katherine's life. She said,

"If I was on the outside looking at it, I would think the same thing. But the truth is that B.J. is so much more like family now than a platonic friend. He’s the godfather to my daughter, he comes over like once a week. Sometimes he’ll come over just to hang out with her."

Kaling didn't stop there and continue to admit that she finds "the When Harry Met Sally version of platonic friends" as "strange," but she and Novak have such a long history that it only makes sense for them to be so close. "But when you’ve known someone for as long as I’ve known him — the time that we met each other, which was like 24," she explained. "Now, we’re both almost 40. It’s such a long time that he truly is just a part of my family."

There's no denying they have quite the connection. It's understandable why fans are analyzing Novak's latest photo with Kaling, but it's probably safe to say that his stare is nothing more than happiness as he celebrated his lifelong friend turning 40.