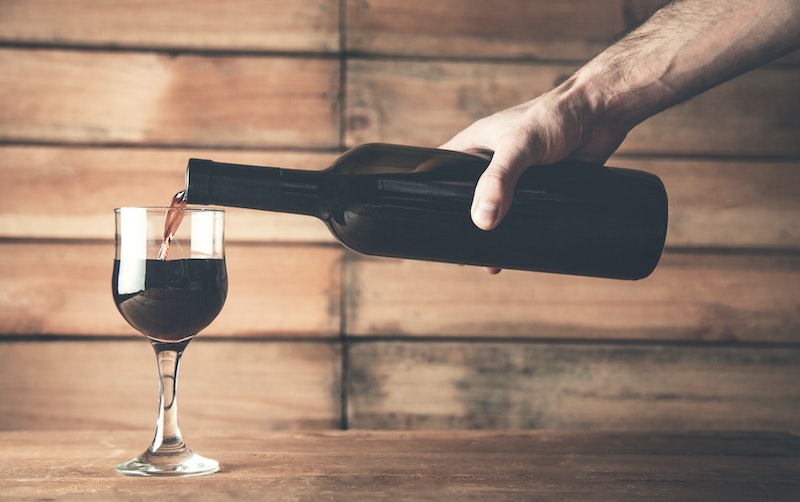 Good news, my fellow creatures of the night: Black wine is here to cut through the sea of rosé and soothe your dark and gothic soul. I mean, don’t get me wrong; I do appreciate the “rosé all day” ethos. But I am not really a “pink” kind of person. I’m more of an “Everything in my wardrobe is black because then I never have to worry about making sure my outfit matches; also, please excuse me while I go shut myself in a dark room and listen to sad music all day” kind of person. And it is for that reason that black wine — described by many as the anti-rosé — appeals to me on a deep and visceral level.

Black wine isn’t really black, of course; it’s red. Very, very dark red — a color achieved by using extremely specific kinds of grapes. The two most prominent varieties of black wine come from Georgia (the country, not the American state) and Cahors in France; in Georgia, the grape used is Saperavi, while in Cahors, it’s Malbec.

According to Vinepair, Saperavi grapes are indigenous to Georgia; indeed, it’s possible that they date back to antiquity. Georgia itself is one of the oldest wine-making countries in the world — traces of wine have been found on the insides of clay vessels from the region from as far back as 5000 BCE — and as wine master Sarah Abbott told the BBC in 2017, we know that the Saperavi grape is ancient due to the fact that there are so many subvarieties of it. That means that it’s had a lot of time to mutate and change over the years (and, possibly, millennia), creating more and more offshoots as time has gone on.

Abbott describes the Saperavi grape as being “a little bit quirky” in that it has both red skin and red juice. That’s unusual; most grapes have white or light-colored pulp, even if they’re a red variety. With Saperavi grapes, however, if you peel one, you’ll find the flesh beneath the peel to be red. Indeed, the juice from the grape can even stain your skin. (Not for nothing does the name “Saperavi” translate to “dye.”) The wines made from these grapes are, accordingly, extremely dark in color — so dark that they appear to be black, although as Maura Judkis notes at the Washington Post, if you look at the wines' legs as they drip down the sides of a glass, their true color reveals itself. According to PureWow, Saperavi wines are “elegant, with notes of juicy berry fruits, spices, and a velvety texture.”

The Malbec grapes used in Cahors’ black wine, meanwhile, also date back quite a long way. The first recorded reference to them dates back to the 16th century, according to Nuvo Magazine, although they were called Auxerrois at the time; the name “Malbec” wasn’t seen on record until the 1780s — “probably because it was planted in Bordeaux by a Monsieur Malbeck,” writes Rod Philips at Nuvo. We do know that Cahors wine has existed for longer than, though; as the Guardian noted in 2010, Eleanor of Aquitaine and Henry II drank it at their wedding, which occurred in 1152.

If you’re anything like me, you hear the word “Malbec” and you immediately think “Argentina.” Beginning in the early 2000s, according to Wine Enthusiast Magazine, Argentina entered a “golden run during which exports to the United States have grown exponentially year after year.” But Malbec grapes aren’t native to Argentina — and, indeed, were brought there in the late 19th century from (you guessed it) France.

So: If these wines have been around for so long, why are they only starting to gain in popularity on the wider stage now? Part of that has to do with the fact that regions other than the places the grapes are from have begun growing the varietals required to make black wine; for example, Standing Stone Vineyards, located by New York’s Finger Lakes, became the first winery in the United States to bottle a Saperavi in 2014. The fact that it’s relatively simple to import wine from the regions it’s actually from helps, too. Want some Cahors wine suggestions to try? Check out this piece at the Chicago Tribune. More interested in Saperavi? WaPo has you covered with this list of Georgian wines worth trying. And still other wineries are coming up with their own spins on black wines using completely different grapes — like, for example, California winery Gnarly Head's Authentic Black, a Petite Syrah-based blend with flavors of boysenberry, chocolate, and baking spices.

But Maura Judkis’ piece at the Washington Post posits that it might be more ideological than that. “It’s Newton’s Third Law of Motion, but applied to trends,” she writes: “Every action has an equal and opposite reaction. So, as your Instagram gets filled up with rainbows and unicorns and Crystal Ball Frappuccinos and edible glitter, the backlash to that is dark, Gothic-tinted food.” The rise of trendy foodstuffs using activated charcoal as an ingredient is one way we’ve seen our lunches and coffee breaks go “goth” in the face of all those rainbow, unicorn, and galaxy options; charcoal ice cream, charcoal lattes, and charcoal pizza have all made the news recently, along with many, many others.

However, continues Judkis, maybe there’s even something more to uncover here. “Maybe #roséallday belongs to an earlier, more optimistic era,” she writes. “Maybe now, since we are in the darkest timeline, is the perfect time for black wine — a dark wine for thinking dark thoughts. Look deep into your glass and you’ll feel like you’re staring into the abyss.”

Now if you’ll excuse me, I have some brooding to do.