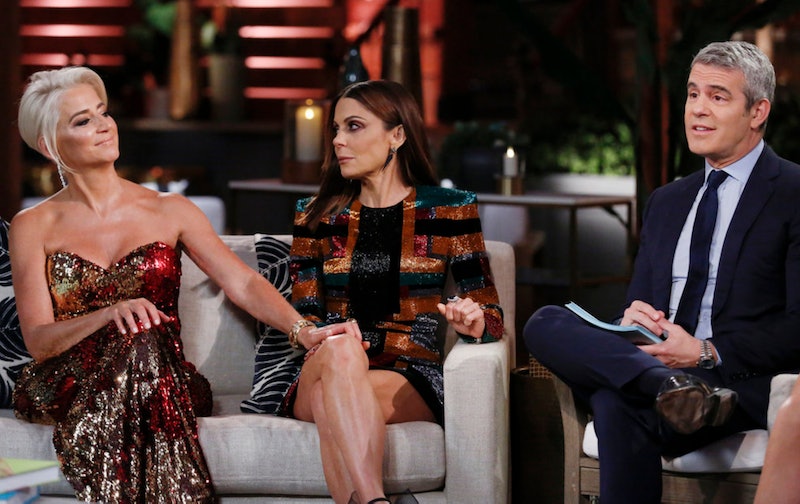 Queen B has left the building (again), and the Bravoverse is shaking in its Manolo Blahniks. It's a devastating moment for Bravo fans, but thankfully, these Bravolebrities' reactions to Bethenny Frankel exiting The Real Housewives of New York City will soothe your aching heart. Bravo stars: They are bummed to see Bethenny go just like us.

On Wednesday, Aug. 21, Variety released a bone-chilling scoop: RHONY icon Bethenny will be stepping away from the reality series for a second time. In a statement provided to Variety, Frankel said,

"I have decided to leave the ‘Housewives’ franchise to explore my next chapter. It’s time to move on and focus on my daughter, my philanthropy and my production partnership with Mark Burnett, producing and starring in shows which represent a shift in the conversation for women. With the changes in modern culture, I want to highlight the strength, confidence and unstoppable power that women have. My experience at Bravo has been an incredibly magical ride. I am so grateful to them for highlighting my entrepreneurialism and allowing me to pave the way for many women to achieve their goals. I am excited for my future. The best is yet to come.”

The Bravo audience first met Bethenny way back when she was part of RHONY's original lineup in 2008. She gave us a few glorious seasons, left the show after Season 3, and then came back for Season 7 to bless us with five more glorious seasons. Though she has not appeared on every episode of the series, Bethenny's RHONY legacy is undeniable. Bravo may find someone new to take her spot, but no one will ever fling their legs open and demand their castmate "Mention it all!" like Queen B. No one will ever raise a trembling glass to their lips like Queen B. No one will ever scream "Go to sleep!" like Queen B. They can introduce us to all the new RHONY cast members they like, but no one‚ and I mean no one, will ever bring it like Bethenny Frankel.

Bethenny addressed her decision to leave the reality series on Instagram on Wednesday, and the post's comment section promptly turned into a place where Bravolebrities and Bravo fans alike could wish her the best and let her know she'll be missed. Below you will find some of the Bravo stars who've paid their respects to Bethenny so far.

Bethenny and The Real Housewives of Beverly Hills veteran go waaaaaay back, and Kyle's show of support does not come as a surprise.

The not-so-newest member of the RHONY cast (can you believe Tinz has been on the show for three seasons already? Time sure does fly when you're watching a perfect reality show!) has nothing but love for Bethenny.

The Real Housewives of Dallas star's rooting for B's "next chapter."

The RHOBH cast member-turned-friend of replied to Bethenny's note on Twitter.

Million Dollar Listing New York's Fredrik, who worked with Bethenny on real estate reality series Bethenny & Fredrik, apparently was at a loss for words after he read her message.

RHONY's cast really will not be the same without B.

The Real Housewives of New Jersey's Margaret speaks the truth.

After the news broke, Bethenny’s longtime RHONY castmate Ramona Singer told People that she “respects the fact that Bethenny has decided to go on with other endeavors,” adding, “I’m only disappointed that Bethenny did not inform her costars that she’s not coming back to the show.” She also said she wishes the founder of Skinnygirl well and thinks it’s “so fantastic that she’ll be taking the time to grow that relationship [with boyfriend Paul Bernon] away from the cameras and to explore other business opportunities.”

You took the emoji right out of my mouth.

The Bravoverse will miss you, Bethenny. Let us raise a (very shaky) glass of Skinnygirl Margarita in your honor.

More like this
Rachel Fuda Gave Birth Just Weeks Before 'RHONJ' Season 13
By Brad Witter
Danielle Cabral From 'RHONJ' Is No Stranger To Reality TV
By Brad Witter
Erika Jayne's Estranged Husband Tom Girardi Has Been Indicted On Fraud Charges
By Jake Viswanath
'RHOSLC’s Heather & Whitney Are Still On A “Friendship Break” After Season 3 Reunion
By Jake Viswanath
Get Even More From Bustle — Sign Up For The Newsletter
From hair trends to relationship advice, our daily newsletter has everything you need to sound like a person who’s on TikTok, even if you aren’t.