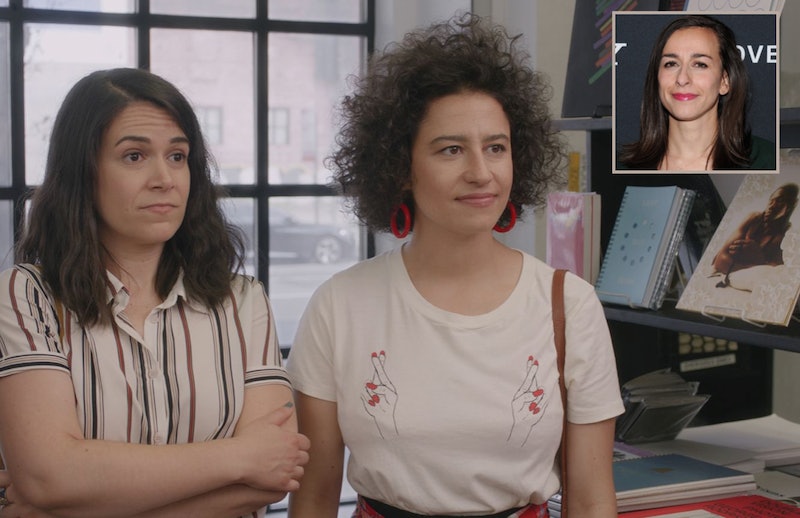 In 2014, Lucia Aniello made her directorial debut on the pilot of her BFFs Abbi Jacobson and Ilana Glazer's show Broad City. It was quite the feat, considering she'd "never directed a minute of television" in her life. But she had an important person in her corner encouraging her to go for it: Broad City executive producer Amy Poehler.

Despite the fact that she'd spoken to Poehler "maybe once," she was rooting for Aniello. "It's kind of hard to put into words what that means to me personally," Aniello tells Bustle. "They say don't meet your idols, and for the most part it's true. But it's not true with Amy Poehler."

It's why, as Broad City approaches its series finale, Aniello is showing how much Poehler's support meant to her by giving other women just starting out a similar co-sign. Aniello, who, with 2017's Rough Night, became the first female director of an R-rated studio comedy in nearly 20 years, knows just how life-changing that kind of support can be.

"Amy's such a bright light in this world for so many people," she says of Poehler, who also played a major role in the making of Natasha Lyonne's Russian Doll. "And I'm absolutely one of them."

Aniello, who's not only a director on Broad City, but a writer and executive producer, admits it's Poehler who indirectly brought on her creative partnership with Jacobson, Glazer, and her on and off screen partner Paul W. Downs, AKA Abbi's Soulstice boss Trey, who's also a writer and producer on the show. The four met while taking classes at the Upright Citizens Brigade, the comedy troupe co-founded by Poehler; Aniello discovered its existence after Googling her. The rest is pretty much history: Aniello, Downs, Jacobs, and Glazer quickly discovered that their similar comedic sensibilities made them a great team.

After Broad City's final episode airs later this month, that's what Aniello will miss the most: "Having an excuse to spend 12 weeks locked in a room together and getting to go make a show with people I’m closest to in my life."

Up until now, Aniello has let her friends have all the fun in front of the camera. But this season she makes her Broad City acting debut in "Artsy Fartsy," playing Abbi's college friend Smelly Pussy Donna. Now Donna is working at MoMA giving TAD — not to be confused with TED — Talks in vagina caftans about how she overcame her once malodorous nether regions.

Aniello still isn't quite sure why playing Donna felt right for her onscreen debut, but the appearance gave her a chance to deliver one of her favorite Broad City jokes. (That's definitely saying something, since she also helped write one of Broad City's best side characters, the yogurt-eating keeper of the mail, Garol.) Left standing alone at the museum's soirée, Donna says, "Well, I’ve always known how to clear out a room."

"I don’t know if anyone else is going to like it, it’s kind of gross," Aniello says, "but I think it’s funny."

"Well, I can’t say that this is the intention," Aniello admits of Broad City paving the way for more female potty humor on TV, "but I do think that there’s something about saying you can be a woman who is a stoner or messy or LGBTQ or a hardcore feminist and you can still have fun and be sexy and cool."

Abbi and Ilana are all of those things in the Aniello-directed Season 3 cold open "Four Seasons in a Bathroom," which is a look at a year in the women's lives from the perspective of their respective toilets. Look closely, and Aniello says there are some secrets hiding in those vignettes, like Ilana's positive pregnancy test. ("It’s assumed that off-camera she has an abortion," Aniello says.) And there's a whole subplot in there about Abbi and Ilana going to a Mets game where something goes terribly wrong. "They’re both in casts," she points out, "so some kind of really horrific accident happened to them off-camera, which I think is really very funny."

What Aniello also finds funny is the very sincere reaction fans had to the episode "Knockoffs," or the one where Abbi pegs. "It was truly a joke that Paul made: 'Yeah, she f*cks him.' He didn’t even mean it to be a real pitch, but Ilana was like 'Yes!'" Aniello says of the Season 2 episode she wrote with Downs.

It wasn't supposed to be politically charged plotline, either, yet it ended up becoming a sex positive statement, one of many the show would make over five seasons. "We kind of felt like it spoke a little bit more to Abbi’s bravery and her openness," Aniello says, "and spoke to what a cool woman she is."

Aniello's plan moving forward is to work with other women both onscreen and off to tell their stories. Right now, she's working as a director and executive producer on Awkwafina's upcoming Comedy Central series, which will chronicle her life growing up in Queens. Aniello says it will "share some DNA with Broad City."

She's also directing Netflix's The Baby-Sitters Club revival, a project that as an "extreme, extreme fangirl" is close to her heart. "I want to kind of have little kids feel the way about The Baby-Sitter’s Club that young women feel about Broad City," she says. "I want them to feel like they are friends with these girls who are very real and very funny and sweet and smart and awkward and kind of accidentally mean but also still care about the community."

In other words, this version of the BSC will be filled with the kind of women who grow up to be the Abbi and Ilanas of the world — or, maybe even a few Lucia Aniellos.