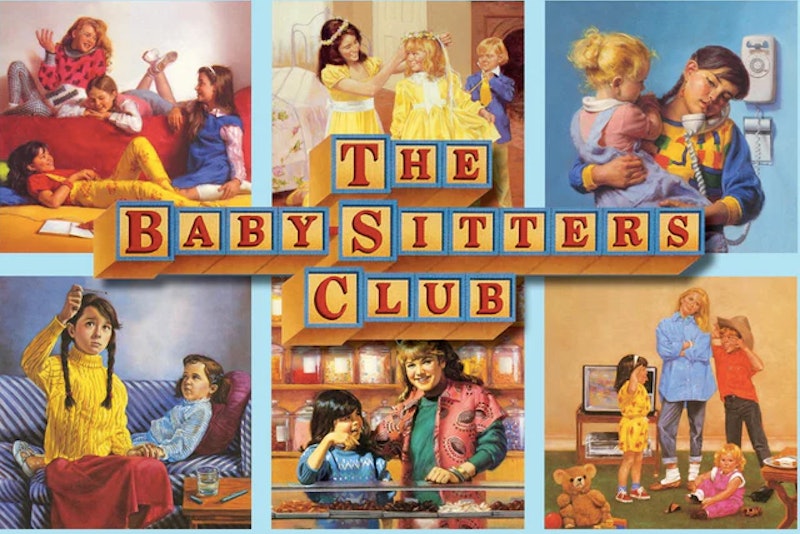 Take your butterfly hair-clips out of storage and reinstall your landline telephone, because The Baby-Sitters Club is officially coming to Netflix. The streaming platform announced on Thursday that Ann M. Martin's beloved children's books are being adapted into a contemporary series from Walden Media and Michael De Luca, who will executive produce. Additional producers include De Luca Productions’ Lucy Kitada and Walden Media's Naia Cucukov.

Most excitingly, Rachel Shukert of Netflix's GLOW will serve as showrunner, Lucia Aniello of Comedy Central's Broad City will serve as director and executive producer, and Ann M. Martin will also produce — which sounds like exactly the sort of fierce female team the BSC truly deserves. The series has received a 10-episode order.

The Baby-Sitter's Club books were published by Scholastic between 1986 and 2000. The books followed the adventures of Kristy, Mary-Anne, Claudia, Stacey and Dawn, five friends who run their own babysitting service. The long-running series — which includes over 200 books licensed in over 20 territories with more than 180 million copies sold to date — has long been celebrated for its portrayals of female friendship, entrepreneurialism, and female empowerment, themes that have resonated with readers for decades.

The series has also transcended generations, thanks to its repackaging as a series of popular graphic novels by Raina Telgemeier and Gale Galligan. A Baby-Sitters Club box-set, featuring the first six books in the series, was released in a collectible tin in July 2018.

In a statement released by Netflix, Ann M. Martin says, "I’m amazed that there are so many passionate fans of The Baby-Sitters Club after all these years, and I’m honored to continue to hear from readers — now grown, who have become writers, editors, teachers, librarians, filmmakers — who say that they see a reflection of themselves in the characters of Kristy and her friends. So I’m very excited about the forthcoming series on Netflix, which I hope will inspire a new generation of readers and leaders everywhere."

The Netflix adaptation of The Baby-Sitters Club will not be the first time these characters have been brought to life on screen. A 13-episode television series based on the books was released in 1990 on HBO and Nickelodeon. In 1995, a film version of the books was released in theaters. Additionally, a 2017 web series uploaded to YouTube by Apple Juice Productions entitled Stoneybrook, Revisited reimagined the core characters as millennials.

There is no word yet on who will star or when the show will premiere, so you've got plenty of time to dig your copies out of the garage (or buy some brand new ones) and get reacquainted with your old pals.

More like this
The 'Firefly Lane' Book Ending Teases Way More Tears To Come In 2023
By K.W. Colyard
'Bridgerton' S3 Teases Exciting Social Season For Penelope Featherington
By Bustle
Lib & Will’s Romance In 'The Wonder' Is Very Different From The Book
By Sam Ramsden
17 Wednesday Addams Quotes For Every Situation
By Grace Wehniainen
Get Even More From Bustle — Sign Up For The Newsletter