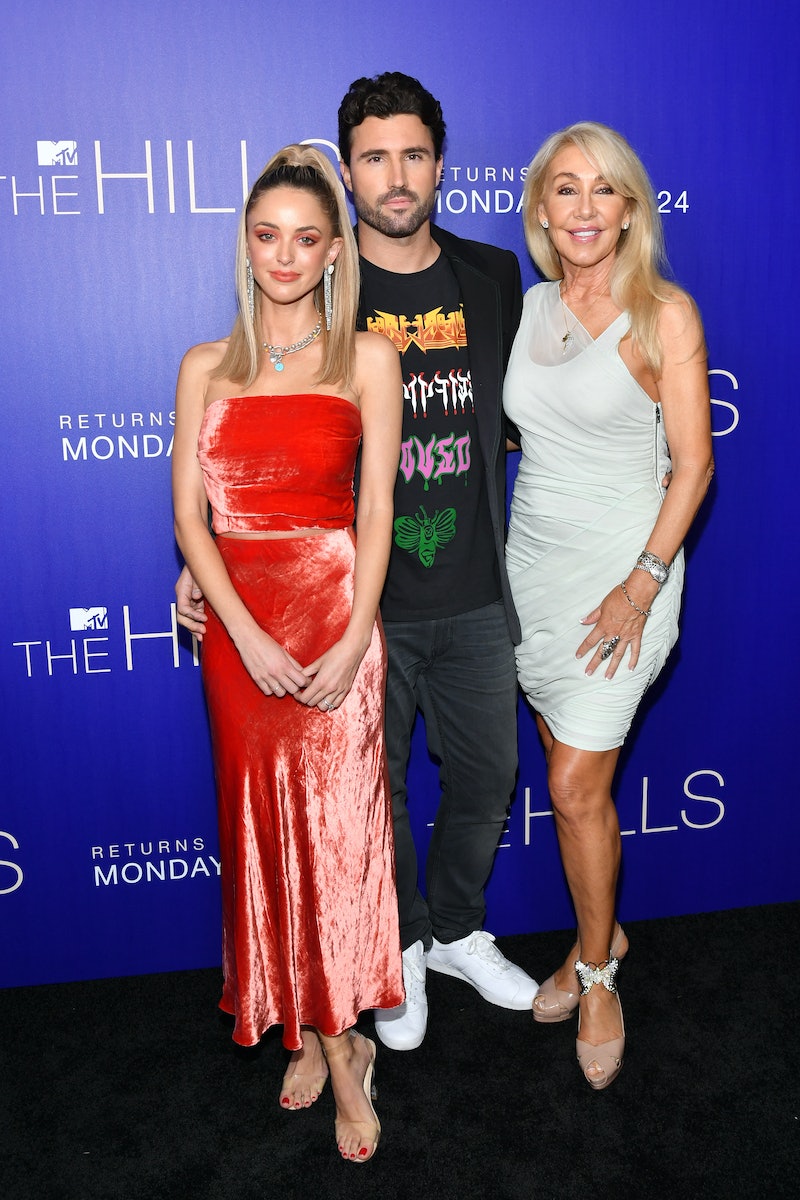 Another day, another chapter in the latest celebrity love triangle. Err, love square? Actually, let's just go with love *saga*. Anyway, as pointed out by @CommentsByCeleb on Thursday morning, Brody Jenner's mom Linda Thompson denied shading Kaitlynn Carter over all those Miley Cyrus romance rumors. The shade in question came via Instagram — which has seemingly become increasingly common these days, especially in this case — and had to do with some comments that Thompson apparently "liked," as reported by Hollywood Life.

OK, so, in case you're not caught up, here's a brief background on the drama at hand: Both Jenner and Carter, and Cyrus and her husband Liam Hemsworth, recently announced their respective splits. Shortly thereafter, Carter and Cyrus were snapped getting close while on a girls' trip to Italy with Cyrus' sister, Brandi. (According to TMZ, the pair kissed by the pool during their trip.) Several outlets have since speculated about the nature and timing of Carter and Cyrus' relationship, which has led to a flurry of ambiguous Instagram comments made by some of the parties involved. Confused? You're not alone.

Now, Thompson has neither publicly addressed her son's split, nor has she addressed the rumors about Carter and Cyrus. However, on Aug. 13, Thompson posted a quote from the Dalai Lama on Instagram that read, "Silence is sometimes the best answer." She then captioned the pic, "When feelings are ineffable, often it is better to say nothing at all #speechless." While it's unclear what she was referring to, exactly, several fans chimed in with a few choice comments about Carter and Cyrus.

Among the comments Thompson apparently "liked," according to Hollywood Life, were things like, "I think she’s [Carter] so hurt and trying to get his attention!! Not the way to do it but sad all around!!" Another one of the comments read, "Speechless is right! When you are married to Brody or Liam, I mean some of the best looking guys on this planet. What the heck?!"

A third comment said, "Why is everyone making a big deal about her kissing Miley? Girls make out all the time when they are having fun or drunk. I don’t get it." Thompson didn't "like" that comment, specifically, but she did, however, reportedly "like" a reply to it that read, "Maybe because it’s disrespectful to the family."

But wait — there's more. The following day, Thompson posted yet another quote to her Instagram. This one read, "Please don't judge people. You don't know what it took someone to get out of bed, look and feel as presentable as possible, and face the day. You never truly know the daily struggles of others."

This time, Carter herself responded to Thompson's post with, "EXACTLY," as captured by @CommentsByCelebs. Was she applauding Thompson's quote in a positive way? Clapping back at her supposed comment "likes" by reinforcing her own struggles? Who knows. Thompson appeared to try and clear up any confusion about her own implications, though, with a direct reply to Carter.

"@kaitlynn And for the record honey," she wrote, the only 'shade' I throw is my own shadow walking away from drama. You know I love you. I always have and I always will," she concluded, followed by a purple heart emoji."

All of this Instagram back-and-forth is pretty confusing. There are clearly a lot of people *and* feelings involved, but social media doesn't really seem like the best place to air or resolve grievances. Regardless, here's to hoping that everyone is able to find peace in their own time.

More like this
Selena Gomez Is Fine Being Single, But She Still Manifested Romance On 'SNL'
By Martha Sorren, Jake Viswanath and Jack Irvin
Ralf Little’s Fiancée Has A *Very* Impressive Resumé
By Sam Ramsden
Justin & Hailey Bieber's Bond Is "Unbreakable" Amid His Ramsay Hunt Diagnosis
By Bustle Editors
Why Sara Pascoe's Husband Is Familiar To Comedy Fans
By Alice Broster
Get Even More From Bustle — Sign Up For The Newsletter