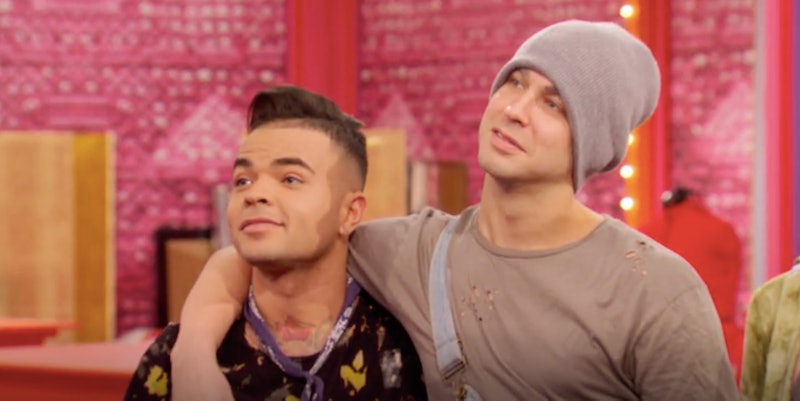 It's official — love is in the air. And so is a cloud of loose powder and hairspray, but that's beside the point. On the March 28 episode of RuPaul's Drag Race Season 11, Brooke Lynn Hytes and Miss Vanjie admitted to having a thing for each other. They insisted that they wouldn't let their relationship come between them as competitors, but they didn't mention the potential it has to guide them to the top.

Fans noticed — well, A'keria noticed — some chemistry between the two of them earlier this season. They were showing affection and even sharing pecks, but in drag world, that could just be saying "Hello," so a potential romance wasn't a for sure thing. Now, they have both officially spoken on the matter, confirming everyone's speculations.

They continued to act lovey-dovey toward each other in the werkroom, and finally, their sisters (and the producers) called them out. "Me and Vanjie have a crush on each other," Brooke said to the camera during a confessional. "I think Vanjie's really cute and we're just getting to know each other." Eyebrows raised,

Vanjie returned the sentiment. "It's really fresh out the womb, you know. I'm going with the flow," she said. "And those kisses keep coming, I'm goin' keep accepting them." The episode captured plenty more smooches where that came from, including one particularly sultry one between Silky Nutmeg Ganache and Nina West. They must've felt left out.

The other girls officially named Brooke and Vanjie's budding romance "Branjie." "That's gonna be their new t-shirt," Plastique laughed. Hopefully, things don't take a turn for "Brangelina" any time soon. On March 26, two days before the Drag Race episode aired, Vanjie posted a cuddly selfie of the two of them on Instagram. "Everyone let me introduce you to my toes," she captioned it with a heart emoji. So it looks like their love could have survived the competition.

"I mean, listen— first of all, I'm very authentic," Vanjie told Entertainment Tonight. "What you see is what you get, it is what it is. And you know, when you trapped up and there's somebody you see, you see a piece of trade coming in and you're not gonna make a move? Sh*t! Maybe we can get a little bit of d*ck and a little bit of crown."

On the show, they both insisted that no fling could steer their focus from the crown. "We're here for a competition," Brooke said matter-of-factly. "It's not personal, it's drag." Vanjie agreed. "I wanna make it crystal clear that ain't no boy gonna come between me and the crown," she said. And that's that.

But while no one has to worry about Branjie taking their respective eyes off of the prize, who's to say they can't use their partnership to get to the top? Sure, only one will be able to win. But runner-up is nothing to sneeze at. Not to mention, so far, they both have impressive standings in the competition.

Will they cross the Drag Race finish line hand-in-hand? Maybe. But once Ru gets a whiff of what's going on, he's likely to throw the couple a curveball. Everyone knows he's not one for predictable plots, even if love is on the line.

More like this
The 'Bachelor In Paradise' Schedule Shifts To 4 Hours Every Week After The Season 8 Premiere
By Brad Witter
‘The Ultimatum: Queer Love’ Is Officially On The Way
By Radhika Menon and Kadin Burnett
You Can “Fall In Love” At The Resort Where Bachelor In Paradise Season 8 Was Filmed
By Brad Witter
Molly-Mae Hague & Tommy Fury Celebrate Pregnancy Reveal In The Sweetest Way
By Sophie McEvoy and Sam Ramsden
Get Even More From Bustle — Sign Up For The Newsletter