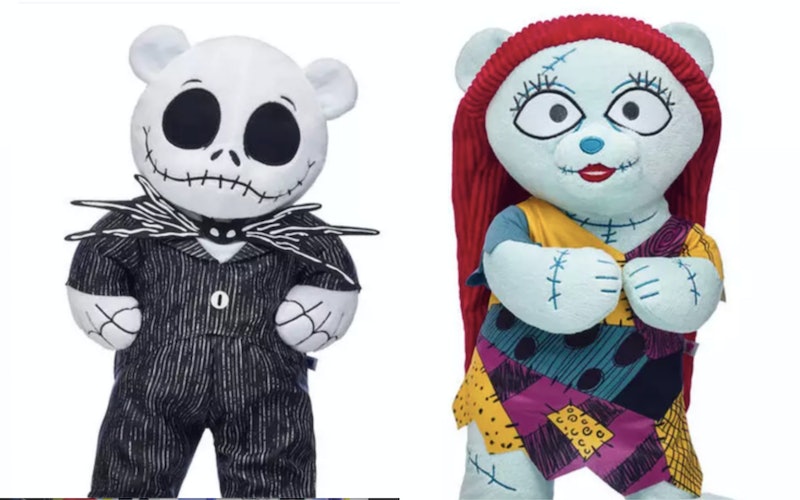 Fact: The Nightmare Before Christmas is the perfect holiday movie, largely due to the fact that it is seasonally appropriate from September all the way through December. I am absolutely prepared to die on this hill — and if you’re with me here, I have excellent news: There’s now a Nightmare Before Christmas collection at Build-A-Bear Workshop, just waiting for you to take it all home. The phrase “yes, please” doesn’t even begin to cover how exciting this news is. (Yes, I am a fully-grown adult who still adores stuffed animals. Why do you ask?)

Build-A-Bear’s seemingly endless array of fanciful toys, props, and other items aimed at truly bringing your new stuffed pals to life have become synonymous with the company, but when the Workshop originally launched in 1997, it carried just bears and clothes. As founder Maxine Clark told Fortune in 2012, the other bells and whistles, like shoes and accessories, didn’t come until a little later on — and it was later still before animals other than bears were added. But as the company picked up steam, its offerings grew; eventually, it was even able to start licensing products — including options from Disney.

Nowadays, there’s a huge number of stuffed animals themed after Disney characters available at Build-A-Bear, along with even more Disney-themed outfits for the bears and other toys. Recent additions to the line include collections for Aladdin and The Lion King, each of which was launched to coincide with the theatrical releases of Disney’s live action versions of the ‘90s-era animated classics.

And now, the world of The Nightmare Before Christmas has joined Build-A-Bear’s Disney collection — just in time for Halloween. The company announced the addition via their Instagram page on Sept. 5, with the fan reaction being immediate and positive. (The post currently has almost 10,000 likes and tons of comments.)

There are currently only two characters to choose from, but they are the most important characters in the film: Jack Skellington and Sally. The Jack bear is white and features the Pumpkin King’s signature skeletal smile; the Sally bear, meanwhile, is light blue, with wide eyes, stitching at her joints, and long, red hair. Both bears are 16 inches high and come with decorative pads on their paws: The Nightmare Before Christmas logo is stamped on the bottoms of their left feet, while the right bears an illustration of the character the bear is meant to represent.

Clothes are included, too, of course — Jack comes with a little shirt-and-trousers set that mimics the look of the character’s black and white suit, complete with a batty bow tie, while Sally comes with her classic, brightly-colored patchwork dress. You can choose to have the bears arrive fully dressed for you and ready to go, or undressed and waiting for you to get them prepared for their big debuts.

And lastly, there’s a sound chip included inside each bear. They don’t spout lines of dialogue from the film, though — they play the actual music from it (which, to be honest, is probably the better choice, because Danny Elfman’s score is magnificent). The Jack bear plays “This Is Halloween,” while the Sally bear plays “Sally’s Song.” Makes sense, no? As is typically the case for Build-A-Bear toys, all you have to do to play the songs is to press the bears’ paws.

There are only two downsides to the collection: First, it’s currently only available online (so, alas, you can’t experience the joy of going to a brick-and-mortar Build-A-Bear location and watching your very own Jack or Sally come to life right before your eyes); and second, the line proved to be so popular that it sold out incredibly quickly. You can, however, still save each of the bears to your Wish List so you can remind yourself to put in an order for them whenever they’re restocked.

That… is one of the greatest images I have ever put in front of my eyeballs.

If unicorns don’t do it for you, though, other Halloween options include the Pumpkin Glow Bear, the Howl-O-Ween Werewolf, and the Midnight Shimmer Bat — so, really, there’s a little something here for everyone. Check out the full Halloween collection here, the Nightmare Before Christmas collection here, and the complete Disney line here.

Now if you’ll excuse me, I, uh, have to go do something about those pumpkins I keep hearing scream in the dead of night. It’s getting to be a bit much…