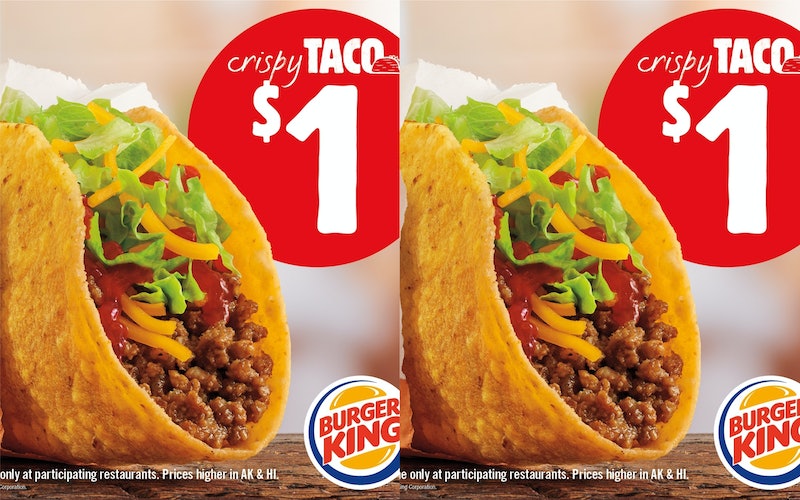 Sometimes, great and delicious things come in unexpected places. We know that Dunkin' makes amazing donuts — but how would you feel if Dunkin' started selling fajitas? Would you buy Pizza Hut omelets, if that was a thing? Because one company is definitely swerving out if its lane. Burger King tacos are here and ... yes, I'm as intrigued and confused as you are.

That's right, the self-proclaimed KING of burgers has moved in a whole other direction, with new Burger King Crispy Tacos. To be fair, the tacos look pretty good — but the real draw has to be that they only cost a single, lonely dollar. One dollar tacos are always going to get me interested — I'm a simple creature.

Per Burger King, the taco includes a crispy shell, seasoned beef, cheddar cheese, lettuce, and what they call "savory taco sauce." What's really amazing is the idea of getting tacos and fries and a milkshake as part of the same order. That is a very exciting prospect indeed.

“We’ve seen success with tacos in our west coast restaurants and knew it was time to bring this west coast favorite nationwide,” Chris Finazzo, President, North America, Burger King Corporation, explained in a press release. “The Crispy Taco adds variety to our snacking items and truly hits the spot.”

Not convinced by the BK's ability to take on a taco? Well, they decided to prove their mettle. The brand took their new tacos down to Austin, Texas — a place that, to put it mildly, knows its darn tacos. They've released a video showing how their tacos fared in the state where everything is bigger (and more taco-y) — and they went down a damn treat. Perhaps unsurprisingly, people were also very impressed with the price tag — one dollar tacos come for us all, in the end.

Burger King has been busy pushing boundaries lately. Back in May, the company introduced Real Meals, instead of Happy Meals, to raise awareness about mental health and encourage kids to talk about their feelings. It was definitely a great cause and a move out of left field for a fast food company, but a welcome one. Sometimes, swerving out of your lane can be a great thing.

In more culinary news, they've brought back Frozen Fanta for the summer — which I think would definitely go well with a taco. If you are lucky enough to live in Spain or Portugal, you've also been treated to the Burger King Unicorn Shake, which is a total dream to look at it, but unfortunately never made it over to the U.S.

But while all of these twists and innovations are definitely exciting, none of them are as big of a departure as introducing the Burger King Crispy Taco. We tend to keep our burger-based fast food and our taco-based fast food very separate. Why? Probably so we can pretend that the taco-based fast food still has some connection to the delicious Mexican cuisine we've mangled to create these Tex-Mex franken-foods. But apparently, we're pulling down these boundaries between us.

Get your Whopper with a side of tacos. Get your tacos with a milkshake to wash it down. Burger King Crispy Tacos are here — and, for just a buck, are you really going to say no?