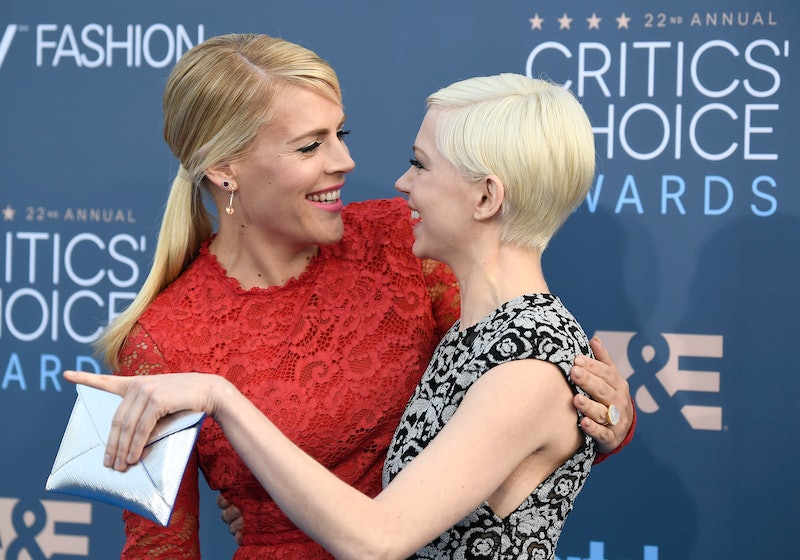 You know them, you love them, and you probably wish they were your best friends. They've been pretty much inseparable since first meeting on the set of Dawson's Creek, especially when it comes to Busy Philipps and Michelle Williams' red carpet date nights. Seeing the two of them arrive together at award shows these days is basically a given, and in her new memoir, This Will Only Hurt A Little (as per People), Philipps finally revealed when that tradition first began.

Seriously, though — can you think of a time where Philipps and Williams didn't show up at an awards show together, adorably holding hands and always grinning ear-to-ear? If you can't, it's probably because they've been rolling like that for more than a decade.

After meeting and bonding on Dawson's Creek in the early 2000s, the two stars both went on to have impressively successful careers. In 2005, Williams was getting all kinds of buzz as Alma in Brokeback Mountain — a role that would end up scoring her a Best Supporting Actress nomination at the 2006 Academy Awards.

Williams had fallen in love with then-partner Heath Ledger on the set of Brokeback Mountain, and Ledger had earned a nomination — Best Actor, for his role as Ennis Del Mar — at that year's Oscars, too. According to Philipps' memoir, since Williams and Ledger were such major Hollywood forces at the time, they were both invited to all kinds of events leading up to the actual awards show.

So, how did Philipps end up as Williams' perpetual plus-one, then? The upcoming Busy Tonight host explained,

"Since [Williams and Ledger] were both nominated [for an Academy Award], they each were able to bring a guest and Michelle asked me to join at every event, which was obviously incredibly thrilling for both of us. That’s basically the origin of me joining Michelle at all the ceremonies for all the awards she’s been nominated for."

Neither Williams nor Ledger would end up winning in their respective categories that year, but Williams has since been nominated for roles on three separate occasions. She was nominated for Best Actress for Blue Valentine in 2011 and My Week With Marilyn in 2012, as well as for Best Supporting Actress in 2017's Manchester By the Sea.

As fans likely know, Ledger went on to win a posthumous Best Supporting Actor Oscar in 2009 for his role as the Joker in The Dark Knight. In 2008 — just one year prior to his second nomination — he tragically and unexpectedly passed away at the age of 28. He and Williams shared a daughter, Matilda.

Even though Williams has yet to nab an Oscar statuette of her own, she and Philipps pretty much stay winning at every awards show they go to together. They always look like they're having the most fun, and their continued support of one another might just be the realest, most genuine, and consistently smile-inducing real-life friendship that Hollywood has ever seen.