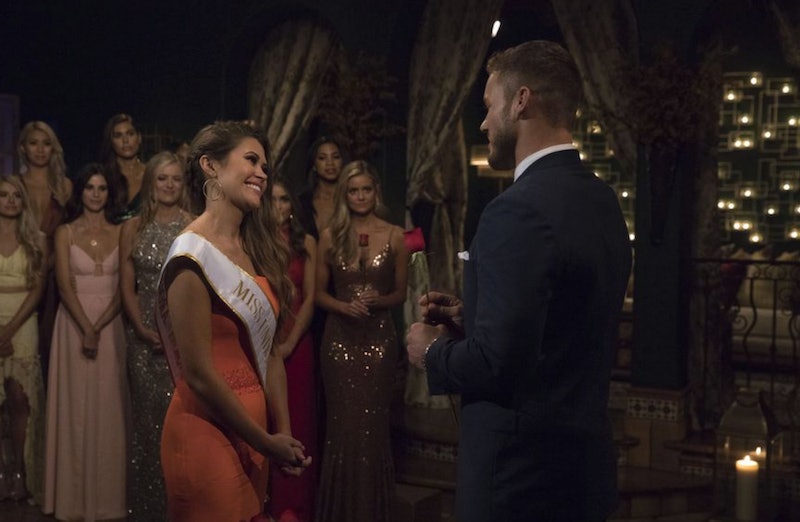 There has been a lot of buzz in Bachelor Nation about a possible love connection between Caelynn Miller-Keyes and Dean Unglert, but don't expect the former’s ex to spill any beans. In a recent interview with Us Weekly, The Bachelor star Colton Underwood said Caelynn’s Bachelor in Paradise experience “turned out well for her, whatever that means.” Well, that sounds nice... whatever that Deans, er, means.

Colton told the publication that Caelynn, who was a contestant on his season of The Bachelor and remains close friends with his girlfriend, Cassie Randolph, “seems very, very happy” after her stint on The Bachelor spinoff. He continued, “What she shared with me is that it was an unbelievable experience and I knew for her, heading there, she was gonna have a great time, just with her personality.”

Might her "unbelievable experience" have something to do with the Bachelor Nation veteran who she is reportedly linked to? On July 15, E! News reported that Bachelor Nation members Caelynn and Dean are reportedly an item. According to the outlet’s source, the pair reportedly connected "through mutual Bachelor Nation friends and started DM'ing on Instagram" and reportedly spent some time together Europe this month. Both also happened to be contestants on the forthcoming season of Bachelor in Paradise.

Which brings us to People's scoop. Shortly after E! News unveiled the rumors about Dean and Caelynn, People shared that an insider claimed the two “really hit it off [on Bachelor in Paradise], but then Dean got cold feet and left.” The source continued, “He got home and realized he really had feelings for Caelynn, so went back to Paradise for a second chance.” According to People’s source, they reportedly left Mexico together and have been a thing ever since.

Caelynn and Dean have neither confirmed nor denied these reports, but they are not acting like these reports do not exist. When Caelynn appeared on The Ben & Ashley I Almost Famous podcast earlier this month, Bachelor Nation alum Ashley Iaconetti asked her guest if she would like to address the Dean rumors. Careful not to spoil what did or did not happen in Paradise, Caelynn teased that the season was “horrible and great at the same time.” She added, “Whether or not I’m in a relationship or, you will just have to wait and stay tuned and watch it August 5.” And on a recent episode of the Help! I Suck at Dating podcast, Dean would not get into his current relationship status, but as E! News noted, he did say that he "went on the show with zero intention to leave the show in a relationship."

Eager to see if Dean did end up leaving the show in a relationship? Itching to learn why Caelynn's time was "horrible and great at the same time"? Clamoring to find out if any of the speculation about Caelynn and Dean is true or not? Can't wait to see what Paradise has in store for John Paul Jones? (What does JPJ have to do with this particular story? Nothing. Regardless, all Bachelor Nation roads lead to JPJ.) The delicious nugget of a dating show will be back on TV before you can say "honey mustard dipping sauce."