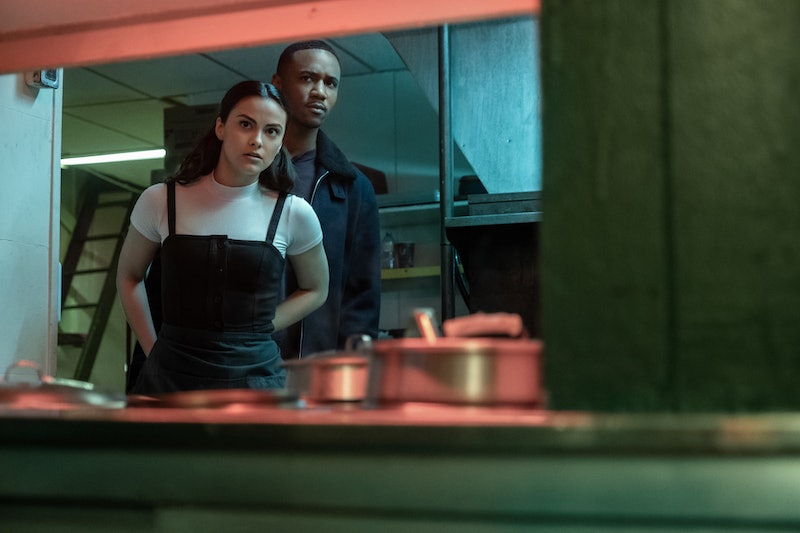 In the new Netflix original movie Dangerous Lies, Riverdale star Camila Mendes takes on a new kind of leading lady. She plays the film's protagonist, Katie, a caregiver to a wealthy elderly man. After working for him for just a few months, they become very close... that is, until he suddenly and mysteriously dies. Mendes' Dangerous Lies character, Katie, is very different than Veronica, the beloved Riverdale figure that made Mendes a breakout star. Which is exactly why she jumped at the role.

"It felt really great to play a character who was more my age. That way I could tell a more mature story," Mendes tells Bustle. "Playing Veronica, I’m not the most relatable character on the show. Not just from her being born into wealth, or running three businesses as a teenager, but there’s a lot of things that make her not the most relatable. But Katie is someone people can see themselves in and I can see myself in."

Unlike Veronica, Katie doesn't come from a privileged background. She and her husband are struggling to pay off their student loans, and make ends meet. Which leads her to take a job working for Leonard (Elliott Gould). But there's another popular film character that Katie's reminding audiences of: Ana de Armas' Marta in Knives Out.

Both characters are young, likable caregivers to extremely rich and powerful older men. They both manage to become close friends to said men and were both nearest to them when they died. And they also both were unexpectedly bequeathed the entire estates of their deceased clients.

While Mendes has read the comparisons between the two films, she personally can't weigh in on it just yet. "I haven't seen [Knives Out] yet! It’s on my list because Katherine [Langford] is a friend of mine," she says. "I feel like I have to see it, but I can see why [people are comparing them], in the sense that it’s a 'whodunit' [and] there’s a mystery to it."

Which is exactly what Mendes loves about the film. "I love that the story has all of these twists and turns. When I was reading the script I really did not know where it was going and I couldn’t place who was to blame. If I can sit there and be captivated when I’m reading a script I know that watching it will be an even better experience," she says.

With additional reporting by Samantha Leach.