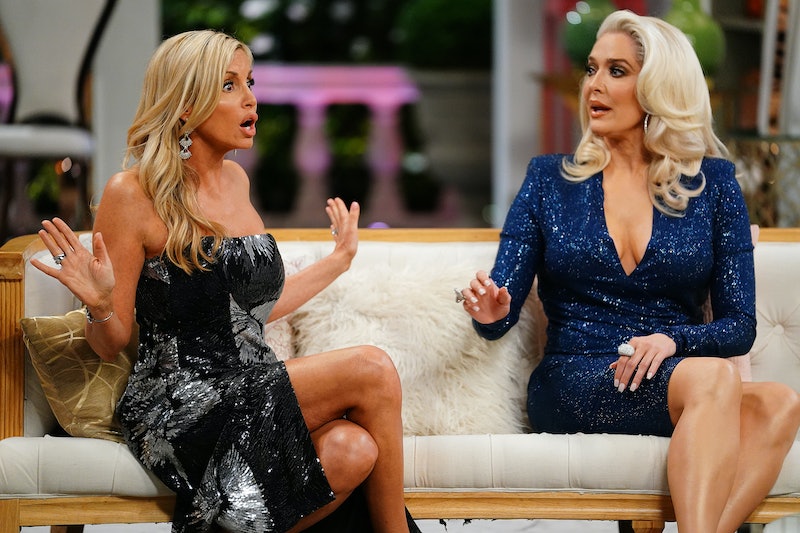 Never say never, Bravo fans, especially when it comes to whether or not Camille Grammer will return to The Real Housewives of Beverly Hills. On Tuesday, Nov. 5, Camille hinted at her Housewives homecoming when she tweeted, “I’m getting back in the game. diamonds and drama. #rhobh.” The 10th season of RHOBH has been filming since August, so it stands to reason that the series veteran will not be around for the entire season, but will make at least one cameo.

Camille has been a fixture of RHOBH since the beginning— well, almost. With the exception of Season 4, she has been either a main cast member or a Friend Of on every season. By the end of Season 9, she was at odds with almost everyone on the main roster. And then, Camille’s remaining ally on the show, Lisa Vanderpump, exited the series in June, and the rest of the Season 9 cast, AKA the group of people who drove her to walk off the set in the middle of a reunion taping, was reportedly brought back for Season 10. Camille eventually returned to the reunion, but her role as a "Friend Of" on Season 10 no longer felt like a given without LVP around.

In August, Camille confirmed in a series of since-deleted tweets that she would not be on the upcoming season. Per People, she tweeted, "I wasn't asked back. It's fine. I did my time on the show. And it’s Kyles show.” In a follow-up tweet, she explained, "It was was up to Kyle. I’m really fine. After the reunion, I didn’t want to come back. It was an awful experience.” Evidently, she was asked back after all.

Ahead of Camille's announcement on Monday, there were rumblings about the Season 10 cast maybe getting along too well for a reality TV show that tries to deliver drama. In October, a source claimed to HollywoodLife that Season 10 has seen "no drama at all with Lisa Vanderpump’s departure," and that the returning cast members plus newcomers Garcelle Beauvais and Sutton Stracke "are all truly friends and [are] getting along, seemingly."

Bravo's no stranger to a wildcard showing up to shake things up when a season has taken a turn for the chill (see: Ashley Davis's appearences on Southern Charm Season 6), and it looks like Camille's expert level pot-stirring will be back for another round. Remember, this is the person who accused Dorit Kemsley and Paul "PK" Kemsley of owing someone she knows a lot of money, made a dig at Denise Richards's rented home after they both had to evacuate during the Woosley Fires, and claimed Teddi Mellencamp-Arroyave gave her daughter the cold shoulder at the airport after her wedding all in the same season.