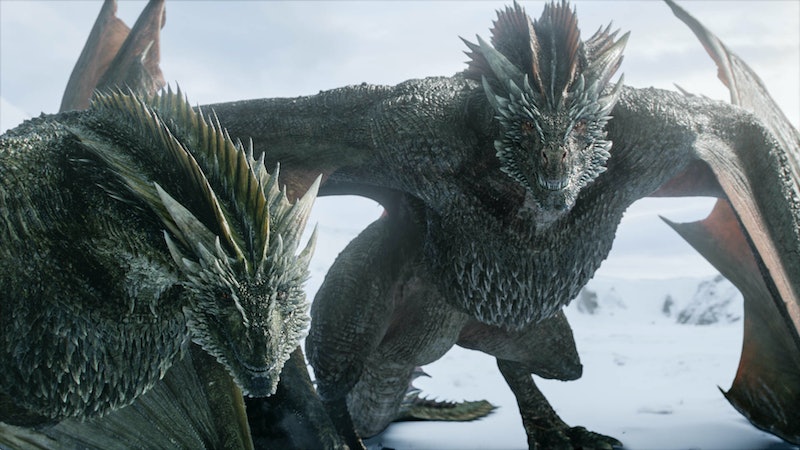 Spoilers for Game of Thrones Season 8 ahead. With just two episodes left in Game of Thrones, Daenerys is down to only one dragon. And whether you're a fan of the Mother of Dragons or just these creatures in general, you may be hoping that dragons can get pregnant on Game of Thrones. If Drogon really is the last of the dragons, that's a depressing notion — not just for Daenerys' chances of winning the Iron Throne, but for the whole Game of Thrones world. And while the HBO series hasn't provided any information on the reproductive system of Daenerys' three dragons, there are some compelling clues from George R. R. Martin's book series and real-life science that more dragons could exist on Game of Thrones.

Let's start with the source material for the HBO show. In the fourth book of the A Song of Ice and Fire series, A Feast for Crows, Sam recalls how Maester Aemon had told him that dragons are sexless before he died. "Dragons are neither male nor female," Aemon told Sam. "But now one and now the other, as changeable as flame." Aemon, who was a Targaryen who gave up the throne, brought up this knowledge in relation to how he believed that Daenerys was the Prince That Was Promised.

Because just like many people believe dragons are male and female, people misinterpreted the prophecy to believe that it could only be a prince and not a Princess That Was Promised.

Maester Aemon wasn't the only person who knew this information about dragons. The elderly Targaryen told Sam how Barth was one of the first people to understand dragons' unique biology. Barth isn't referenced on the TV show, but he was Hand of the King for the early Targaryen ruler Jaehaerys, who was a dragonrider. In his controversial book Dragons, Wyrms, and Wyverns: Their Unnatural History, Barth claimed that dragons were sexless, but other maesters disagreed with this assertion.

In real-life biology out of Game of Thrones, there are a number of plants and animals that have hermaphroditism — "the condition of having both male and female reproductive organs," according to Encyclopædia Britannica. Animals like snails, slugs, and barnacles have hermaphroditism and interestingly enough, Forbes reported that Australian bearded dragons can change sex. Lizards with male chromosomal makeup reverse their sex and become females in high temperatures during embryonic development.

In real life, these "dragons" only change their sex when they are in their eggs. But Game of Thrones could use this actual animal's biology and apply it in some form to the fantasy show. After all, the dragons have experienced major temperature shifts since they went up to the North to fight the White Walkers. And if you think that sex between the dragons is required to reproduce, well that might not be so necessary either. Scientific American reported on a lizard species in the U.S. Southwest that asexually reproduces. Female whiptail lizards don't need male fertilization to produce offspring. So maybe Daenerys' dragons can do the same thing.

The HBO series hasn't gone into any of the biology lessons of dragons. And from what we've seen, it's assumed that Daenerys' three dragons are male since she named them after her two brothers and her husband. But the origins of her dragon eggs are pretty mysterious and show that humans don't really understand this mystical creature.

The Targaryen supporter Illyrio Mopatis, who had been hosting Daenerys and Viserys, gave Daenerys three petrified dragon eggs as a wedding gift in the series premiere. Illyrio told her they were from "the Shadow Lands beyond Asshai" and that "the ages have turned them to stone." But Illyrio was clearly wrong about these dragon eggs since when Daenerys put them in fire during the Season 1 finale, three dragons were born. So who's to say that there aren't other viable dragon eggs out there unrelated to Daenerys' children? Or that Drogon, Viserion, or Rhaegal hadn't produced eggs themselves?

During the Season 4 finale, Daenerys locked away Viserion and Rhaegal in the catacombs of Meereen. While these living conditions weren't ideal, who knows what those two dragons were doing down there. Then, there's Drogon, who flew away and was living on his own until the penultimate episode of Season 5. And even then, Drogon wasn't back for good since Daenerys got captured by the Dothraki. So the dragons certainly have had a lot of time to themselves to potentially lay eggs without anyone else noticing. Which could mean that Drogon might not be the last of the dragons of Game of Thrones — and that Daenerys stands a fire-fueled fighting chance against Cersei.