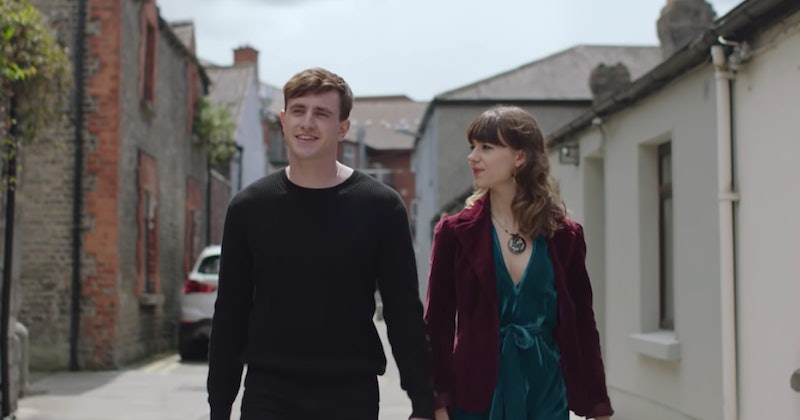 Wanting something you can’t have is intoxicating, whether that's coffee after swearing off of caffeine, or a relationship with someone who's unavailable. But when you can't be with the person you desire, for whatever reason, experts say poor timing can romanticize the connection. In other words, their lack of attainability actually makes them more attractive in your mind's eye. And just like that, you're pining away, writing cheesy texts you'll never send, and endlessly wondering what could have been.

Take Normal People, Hulu's new sexy show, based on Sally Rooney's novel of the same name. Marianne and Connell, the series' two protagonists, quickly fall into a secret relationship in high school, then walk back into each other's paths in college. The two are on-again, off-again so many times they lose count — and can't get enough of each other as a result. But is it the impossible nature of their relationship that makes their connection so potent?

If love doesn't conquer all, does it even matter?

According to Dr. Patricia Celan, a psychiatry resident, it all comes back to the brain. "Humans like a challenge and have a tendency to obsess when unable to meet goals," she tells Bustle. "If the timing is always off — because one or both parties are taken or are fresh out of a breakup — then that makes the other person more desirable because of the unattainability."

Instead of moving on, your mind will zero in on your goal of being together, all the while playing a highlight reel in your head. And it'll feel like a major loss, which could explain why you won't be interested in someone who is actually available, even if they're the perfect match for you on paper. Human beings have been taught, through folklore and fairytales, that true love needs to feel earned, through adversity. If love doesn't conquer all, does it even matter?

"Romanticizing in this way tends to work against overall mental health by creating a false belief that certain people or relationships are all-positive rather than having a natural blend of benefits and weaknesses," Dr. Carla Marie Manly, a clinical psychologist, tells Bustle.

Of course, romanticization is often at its most intense when you don't know the person you're romanticizing. Mystery breeds madness. "When you’ve not had the opportunity to truly get to know someone — their flaws as well as their strengths — it’s easy to fantasize about the person’s perceived strengths as well as how 'perfect' the relationship would have been," Manly adds. Once you see through someone's mystique, you might realize you weren't actually missing out on much.

And while it's possible you do truly have a genuine connection, like Marianne and Connell, it's often necessary to recognize these tendencies and consciously resolve to move past them. One way to do so is by reminding yourself that you don't have all the facts, or are only looking at one side of the story.

"As we generally don’t get to know someone well romantically until we’ve invested a full year of heartfelt time and effort into developing the relationship, it’s important to remind yourself that your romantic imaginings are based on insufficient information," Manly says.

You might also try negative reappraisal or reminding yourself that no one is as perfect as they seem. "This means making a pros and cons list about the person," Celan says.

Allow your brain to dissolve its highlight reel with a hint of reality. Then check back whenever necessary.

More like this
The 19 Best Tweets & Memes About Bisexual Awareness Week
By Lexi Inks
Kendall Jenner Thinks Tristan Thompson "Wanted To Trap" Khloé With Another Baby
By Jake Viswanath
Are Quality Time & Gift-Receiving Love Languages Compatible?
By Lexi Inks
20 Women Reveal Exactly How Long It Took Them To Get Over Their Ex
By Amanda Chatel and Lexi Inks
Get Even More From Bustle — Sign Up For The Newsletter