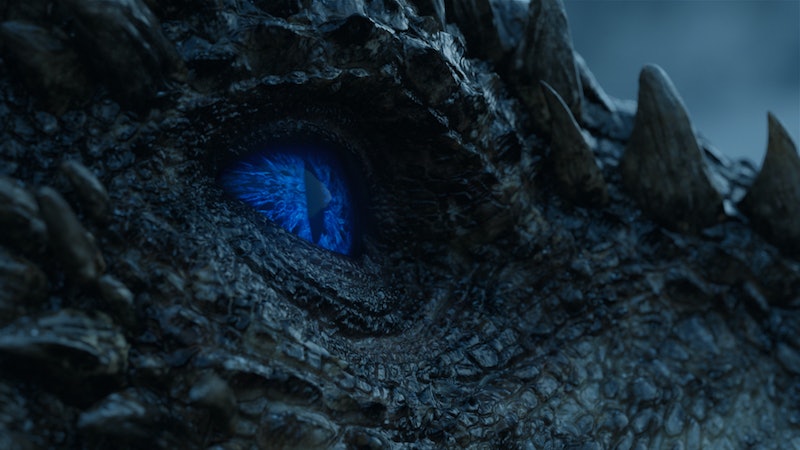 During Sunday's Game of Thrones, hearts froze when Arya and Sansa's rivalry reached a new nadir, hearts melted when Jon and Dany finally expressed their feelings for one another, and hearts broke when the Night King killed Viserion and turned him into a wight-dragon. But can "ice dragons" be turned back into regular dragons? That's probably the foremost question on the minds of thousands of Game Of Thrones viewers after the pulse-pounding events of Season 7's penultimate episode, "Beyond The Wall," given that one of Daenerys' children is now in the thrall of her fiercest enemy.

Before it's determined whether or not Viserion can be turned back, it's important to know what Viserion has been turned into in the first place. For all the clamoring and theorizing among fans about ice dragons, it seems unlikely that Dany's "child" has suddenly been transformed into a completely different species. In his books, George R.R. Martin has made it clear that ice dragons are a separate breed of beast entirely; hailing from the Shivering Sea, ice dragons are many times larger than their fire-breathing Valyrian cousins, made of "living ice" with translucent wings and eyes of pale blue crystal (not the deep, piercing blue viewers have come to associate with wights).

Of course, the show has changed things from the books before, so there's a chance the writers could still have an "ice dragon" surprise in store for viewers. But based on all the rules that have been established on GoT itself about the Night King and his thralls, it still seems unlikely. His power has never fundamentally changed or transformed his victims before — it simply reanimates dead carcasses in their old form and forces them to operate under the Night King's control. By all the rules of the show, Viserion should still be made of flesh and scales, not ice, and he should still breathe fire as before, not a deathly cold wind; he'll just be doing it under the Night King's control now.

(If so, that would certainly be one way to deal with the Wall; an ice dragon would only add to the Wall's height if he breathed on it, whereas a wight-dragon that still breathed fire could potentially melt it to the ground.)

That's actually bad news for dragon fans, though. If Viserion had somehow been magically transformed into a different kind of dragon, there might have been some hope that another kind of magic could break the Night King's spell and transform him back into the fire-breathing lizard he once was. But the fact that he has simply been raised as a wight probably spells doom for the once-proud creature.

That's because, in all the various ways characters have learned to deal with wights, none of them have involved turning the dead thing back into a living, breathing being. You can light them on fire, as Jon did with the first wight he encountered back in Season 1 — but there's that whole problem of "fire cannot kill a dragon." You can stab them with dragonglass, as Jorah just did to the wight-polar bear — but it's going to be hard to get close enough to a dragon to do that, as Jaime can attest after the Loot Train Attack. And you can kill the White Walker who turned them, as the Magnificent Seven learned when they captured the wight in this episode — but that results in the collapse and destruction of the dead things in its thrall.

Given that the Night King will undoubtedly have to be killed before the show's end, viewers now know that the villain's death will also result in the inevitable (second) death of Viserion at the same time. So there doesn't seem to be much hope for restoring him to his former glory… which makes sense when you think about it. After all, wights aren't living creatures who have had a spell put on them; they're creatures that have already died, whose corpses have simply been animated under another being's control. Even if you break the Night King's control, there's no way to bring the dead creature back to life.

…Or is there? Therein lies the one thin shred of hope for those hoping Viserion can be saved, that he could somehow be resurrected. If a wight was suddenly brought back to life, surely that would break the Night King's control of him. But who could perform such a miracle? Thoros of Myr just succumbed to his wounds north of the Wall; and the only other person who viewers have seen raise someone from the dead just peaced out for Essos.

Perhaps that's the part Melisandre still has to play in this story. Before she left Dragonstone, she told Varys that she would return to Westeros one more time to die. What if she comes back when the Great War is at its most dire point, and uses the power of R'hllor to bring Viserion back to life, snapping him out of the Night King's control and allowing the dragon to turn on its former master at the last second — probably at the cost of her own life? That would certainly redeem the Red Priestess for all her horrible child-burning ways… and give GoT fans an unexpectedly happy ending for Dany's trio of dragons.