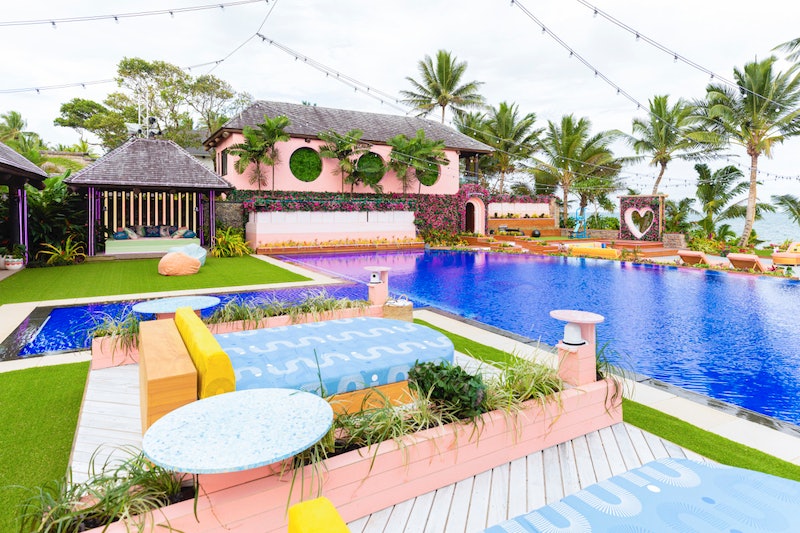 Companies like Airbnb have made it easier for people to rent elaborate destination homes for vacation. But once you start watching the U.S. version of Love Island, your standard for vacation luxury may become even more elevated. With its giant bedroom, epic pool, and not-so-secret hideaway, who wouldn't want to rent the Love Island villa? The Fijian estate by the ocean will be home to the rotating cast of singles whose goal is to couple up when the American version of the British reality show premieres on July 9. If they don't make a love match, the "islanders" will be dumped — and have to leave this steamy paradise. But are you able to stay at this villa without dating for all of America to see on TV? The verdict is still out.

Just like its British counterpart, the Love Island U.S. villa is full of vibrant colors. But while Love Island U.K. takes place on the Spanish island Mallorca in the Mediterranean Sea, the American version is located on a Fijian island in the Pacific Ocean. Ahead of the premiere, host Arielle Vandenberg gave a tour of the villa and it may tempt you to give reality TV a try just to get a stay there.

And hey, that could be a possibility for you if you're approximately under 30 (not an official rule, but that's pretty standard), super fit, and single since casting for this season of Love Island is still open.

According to CBS, some of the features of the Love Island villa include 3,000 Fijian plants, neon signs and lights (one mile of 'em!), a giant deck made up of 20,000 feet of timber, and more than 300 feet of custom fabrics for the furniture and pillows. Artist Betty Larkin designed eight murals for the shared bedroom and Jonathan Adler designed the hideaway where couples can spend alone time together.

Yet, "alone time" isn't actually a thing on Love Island. Vandenberg gave an extended tour of the villa on her Instagram Story ahead of the Love Island premiere. And she highlighted the many microphones and cameras located throughout the property, including in the hideaway. Sure, the Love Island producers wouldn't be tuning if you stayed there, but it does make you think twice.

Another element that you might possibly have to get used to if you stayed there are the geckos since Vandenberg shared they had to create a net over her bed to stop them from joining her for a slumber. But that's the price you have to pay for being in paradise.

Despite cameras and lizards, the real reason information about staying at the villa is probably sparse is because the show is filming right now. Vandenberg shared in her Story that what they were currently filming on July 8 and that this footage would be what viewers would be watching the very next day. So, for now, the Love Island U.S. villa is off-limits to anyone not part of the production.

You can stay in the Love Island U.K. location with the U.K. publication The Sun reporting that it costs about £3,000 a week — which is closer to $4,000. And if you live on the East Coast of the U.S., the flight to Mallorca is actually shorter than your flight to Fiji. Of course, the opposite is true if you live on the West Coast. (The Brits who participate in Love Island in the U.K. though only have a short flight of about three hours to get to their villa.) But just saying that you've got options if the Love Island U.S. villa doesn't become open to the public.

Since the British version of the villa is available to rent and the U.S. is copying the franchise, there's reason to hope you'll be able to rent the Fijian home. But for now, you'll just have to watch all the hookups that go down there from your couch — and maybe that will either inspire you or sway you away from staying at the Love Island villa.

More like this
Twitter Is Saying The Same Thing About 'Love Island'
By Sophie McEvoy
'Love Island’s Kai Fagan Is Very Clear About What He Doesn’t Like
By Sam Ramsden and Darshita Goyal
This Pre-'Love Island' Video Of Olivia & Zara Together Changes Everything
By Bustle UK
Love Island’s Latest Winter Season Finally Has A US Release Date
By Grace Wehniainen
Get Even More From Bustle — Sign Up For The Newsletter
From hair trends to relationship advice, our daily newsletter has everything you need to sound like a person who’s on TikTok, even if you aren’t.