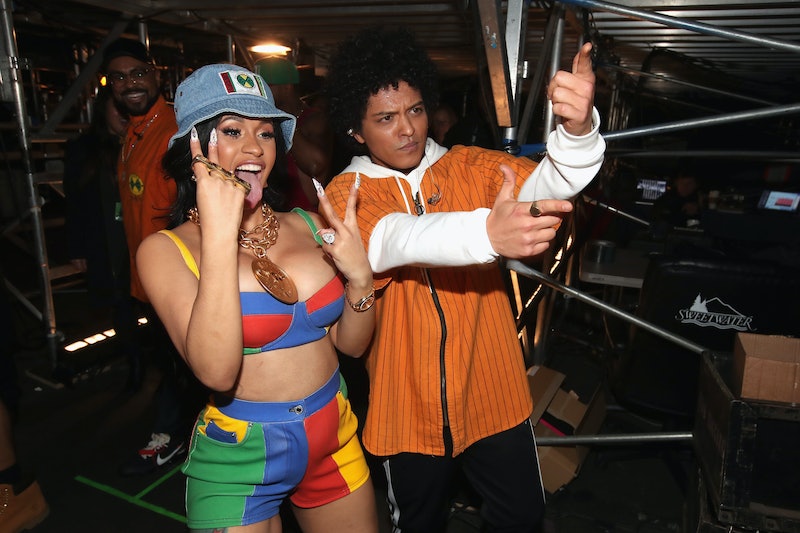 Start lining the awards up, because it looks like Cardi B and Bruno Mars may have another hit on their hands. At midnight on Feb. 15, Cardi and Bruno Mars released their new song "Please Me," and the record is so hot that Twitter can't seem to get enough. The tune, which arrives as the follow-up to their collaboration on the 2018 jam "Finesse," slows things down a bit, serving as the ultimate ode to intimacy and sexual pleasure.

Although the throwback '90s melody is certainly enough to set the mood, the song's lyrics help to take things next level with Cardi serving up a super-duper dose of sexy. In her first verse, Cardi explicitly raps:

"Lollipoppin' (Poppin'), twerkin' in some J's / On the dance floor, no panties in the way / I take my time with it, bring you close to me / Don't want no young dumb sh*t / Better f*ck me like we listenin' to Jodeci"

Mars' vibe is a bit more subdued, and his position on the song serves as a total complement to Cardi's mission. Bringing things full circle on the chorus, he croons: "Turn around and just tease me, baby / You know what I want and what I need, baby." And it's a vibe that has listeners in a major mood.

Despite the song not being a dance song, per se, (it's certainly no club banger) the internet has seemingly not stopped jamming since the song was released early Friday morning. Fans of the song took to Twitter to share their feelings and the reactions prove that Cardi and Mars' latest effort is soon to be everyone's favorite slow-jam.

Calling Cardi and Bruno Mars the "most powerful duo," @carlypsope seems to be a total stan of their new collaboration.

Writer Clarkisha Kent needed no partner when it comes to dancing to Cardi and Mars' new song.

Fan @KeepinUPwitHER was extremely adamant about sharing their thoughts on Cardi and Mars' song being a "hit." And fellow listener @KaydokW agrees, calling the song "fire."

@Kiara_monet97 seems to be extremely pleased with the effort, calling "Please Me" out as a "banger."

"Please Me" has fan @Tastyberries1 in a major mood.

Another listener, @SEAN_THE_FINALE, used a Janet Jackson GIF to demonstrate their position on the song.

Meanwhile, this Twitter-fan @TheDeniVal declared that Cardi and Mars have scored yet another hit with their new release.

At this rate, fans like @patricepannell5 only have one question: when does the Cardi B-Bruno Mars album drop?

The song is most certainly a bop that has fans rejoicing for more reasons than one. Not only does the track's arrival serve as an official reunion for Cardi and Mars, but it's also brought the "Money" entertainer back to Instagram after she quit just days prior due to backlash from her Grammys win. To the joy of fans, Cardi reactivated her account to announce the new song, sharing the album's cover art on Feb. 14. In her caption, she wrote, "Ok so I’m back from retirement to announce I have a brand new song coming out Friday at midnight with @brunomars. # twogrammywinningartist 🏆🏆" Bruno Mars also shared the same image with the caption, "NEW SONG THIS FRIDAY!"

While it goes without saying that Cardi and Bruno Mars make beautiful music together, fan reactions to "Please Me" make it abundantly clear that these two should collaborate more often.