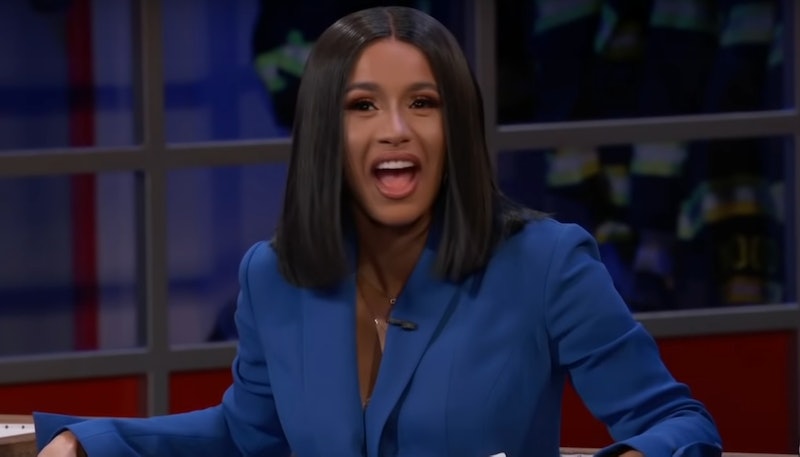 Eeeooowww! Er, actually, more like, "eeeooowww-ch!" During an appearance on Jimmy Kimmel Live on Oct. 17, Cardi B talked about giving birth to baby Kulture, and her honesty might make you a little ... well, uncomfortable. But at the same time, you'll probably admire her openness.

Let's be honest: the Bronx-born rapper has never shied away from telling it like it is. So, naturally, her latest confession about childbirth — in front of a massive, live audience at Howard Gilman Opera House of the Brooklyn Academy of Music in Brooklyn, NY for Kimmel's 2nd annual "Brooklyn Week" tapings — was no different.

Over the course of the last year, Cardi's career has sky-rocketed to unprecedented heights. Not only that, but in the midst of it all, she and her husband Offset (of Migos) welcomed their first child Kulture back in July.

"Was childbirth easier or harder than you imagined it would be?" the host inquired. Now, here's where things get a little graphic. If you're a fan of Cardi B, though, you should at least be kind of used to her bluntness at this point.

"Uh, it was totally harder," Cardi confessed. "[Kulture] broke my vagina." Well, there you have it, folks. Real talk from Cardi B about the *literal* pains of childbirth. "That's a rude thing for her to do," Kimmel finally said, after some hilariously uncomfortable, state-of-shock laughing.

"You know, why nobody told you about those things?" the rapper mused, which is a totally fair question, by the way. "Nobody told me they were going to stitch my vagina," she continued. Hang on — none of Cardi's friends or family members ever discussed the post-baby recovery process with her? Talk about a rude thing to do — or, rather, not to do. Again: "Eeeooowww-ch."

This isn't the first time Cardi has mentioned getting stitches *down there* though. The experience clearly stuck with her, and it's not hard to imagine why. During a recent interview with W Magazine, the rapper had a lot to say about the more physical, less talked-about side of post-pregnancy life.

"People don’t really talk about what you go through after pregnancy," she told the publication. "Like, they don’t tell you that you get stitches down there or that your first two weeks you’re constipated. Or that you get contractions because of breastfeeding. I wasn’t expecting that."

Speaking of the unexpected, Cardi made another interesting admission to Kimmel later on in their interview. No, not about her lady-parts — about the very, um, inclusive cast of characters that were in the delivery room while she was in labor.

Her sister Hennessy Carolina was there, as was her mom, her dad, her husband, her mother-in-law, and ... her publicist. Yes, you read that correctly. Cardi said — very casually, no less — that her publicist was present while she was giving birth to Kulture. Guess it really is a full-time job, huh?

Really and truly, though, Cardi B's confessions never disappoint. They're open, honest, and authentic. They're also incredibly educational from time to time — even if you're learning things you never thought you'd want to know.