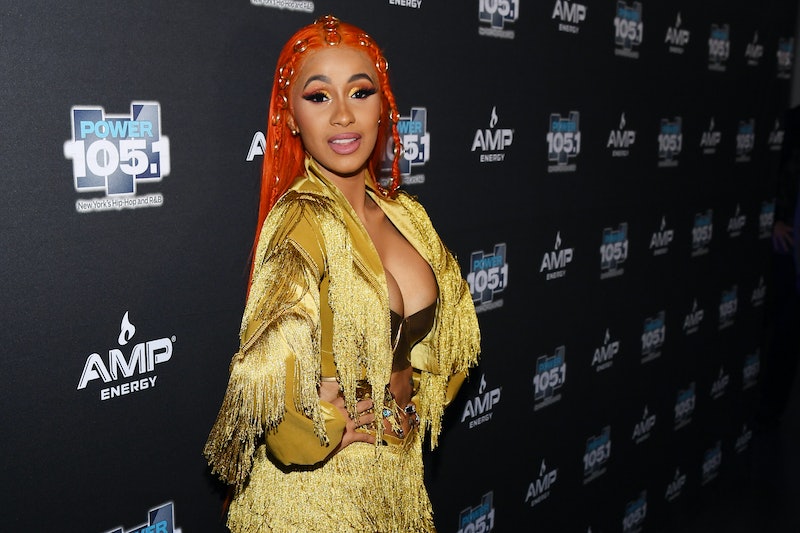 Maroon 5 will be joined by rappers Travis Scott and Big Boi when they take the stage during the Pepsi Super Bowl Halftime Show on Sunday night, but there was another popular rapper who almost performed alongside the band: Cardi B. And in a Feb. 1 interview with the Associated Press, Cardi B addressed the report that she turned down the 2019 Super Bowl Halftime Show in order to show support for former San Francisco 49ers quarterback Colin Kaepernick, and his mission to speak out against police brutality and social injustice.

Cardi B admitted to the news outlet that she had "mixed feelings" about turning down the major gig, but further explained that she felt that she had to turn down the opportunity in order to stand up against the NFL's treatment of Kaepernick, who has been a free agent since March 2017. Last October, Kaepernick filed a lawsuit against the NFL accusing the league of conspiring to "deprive Mr. Kaepernick of employment rights in retaliation for Mr. Kaepernick's leadership and advocacy for equality and social justice and his bringing awareness to peculiar institutions still undermining racial equality in the United States."

Cardi B claimed that she turned down a very large amount of money to stand by Kaepernick, despite reports that performers aren't paid for the halftime show: "You have to sacrifice that," Cardi told the AP. "I got to sacrifice a lot of money to perform. But there’s a man who sacrificed his job for us, so we got to stand behind him." (Bustle reached out to the NFL for comment regarding the offer of money, but has not yet received a response.)

Cardi's husband, Migos rapper Offset, seemed to support her decision to turn down the gig, based on her comments about his own decision regarding the game. "My husband, he loves football. His kids play football. It’s really hard for him," she told the AP. "He really wants to go to the Super Bowl, but he can’t go to the Super Bowl, because he’s got to stand for something."

Cardi has long been open about her support of Kaepernick, even telling TMZ last February that she would only perform at the Super Bowl if the former football player were hired by another team. But while the rapper won't perform at the Halftime Show, she will appear at a Super Bowl party in Atlanta over the weekend, and she stars in a Pepsi commercial that will air during the big game, for which she has received criticism.

"I hear people saying like 'Oh, y’all are saying all this stuff about the Super Bowl, but you’re doing all these parties,'" she told the AP about the backlash she's received due to her Super Bowl obligations. "And it’s like, well, if the NFL could benefit off from us, then I’m going to benefit off y’all. Y’all make the most money off our people. Why am I not going to take advantage of y’all and take money from y’all too? Because of y’all, we are getting these parties. OK, thank you."

Cardi isn't the only artist who reportedly made the decision to turn down the Super Bowl this year. Before Maroon 5 were announced as performers at the Halftime Show, there were reports that multiple artists, including Rihanna, had turned down the opportunity to perform in order to stand behind Kaepernick (Bustle reached out to the NFL at the time regarding these reports, but did not receive a response).

The Super Bowl Halftime Show is a major event, and by turning down the opportunity to perform in order to stand up for what she believes in, Cardi B has made it clear that no paycheck is worth compromising her values.