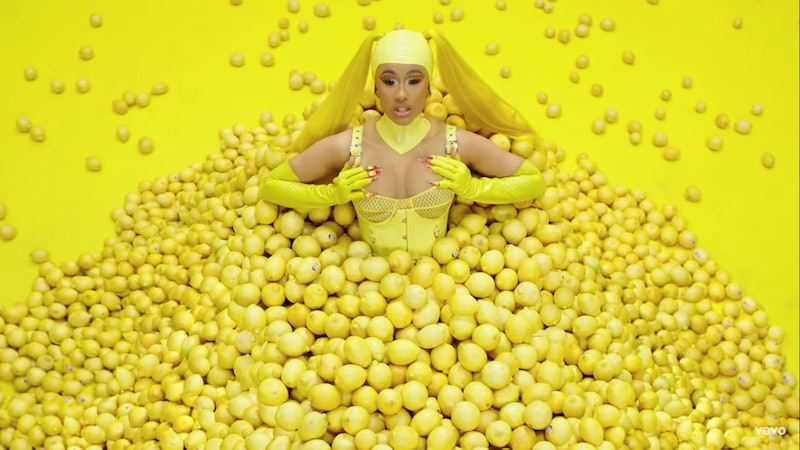 When it comes to celebrity nails, there may be no one whose claws are more famous than Cardi B. Even the rapper's nail artist is famous thanks to her work. However, that doesn't mean the looks aren't attainable. In fact, Cardi B's nails in the "CLOUT" music video included $10 nail stickers. The best part? You can still buy them.

On April 18, Offset's new music video "CLOUT" dropped on YouTube and given that Cardi B is a featured artist on the track, of course she starred alongside her partner. While Offset makes up the majority of the video and song, Cardi comes in about half way through the video looking as gorgeous as ever.

The rapper rocks two different latex outfits in the video. The first is a yellow corset featuring a yellow fitted cap with two yellow blonde ponytails sticking out. You don't get to see the bottom because well, she's buried in lemons. The second outfit is a leather two piece set, complete with Madonna-esque shaped cups, mesh, and chains.

Now, let's be honest, you're likely not going to wear either of Cardi's outfits to work. However, you can rock her nail design. The rapper's racing-themed nail design was done by her long time nail artist Jenny Bui using $10 nail stickers from NLCA Nails, and they're still available.

The decals are still available over on the NCLA website.

Of course, Cardi B's nails in the "CLOUT" music video are just one of the times that her next level looks have been notable, and it's definitely not always because the designs are affordable.

Back in Feb. 2019, Cardi starred in Pepsi's Super Bowl ad thanks to her famous catchpharse, "Okurrr." The ad was all about being asked if Pepsi was okay in the absence of Coca-Cola, who else better than Cardi (and Lil Jon) to express just how okay the soda is?

Of course, Cardi B looks gorgeous in the Pepsi commercial, but her nails may have just stolen the show. Those red, blue, and white nails a la the iconic can of Pepsi featured nearly 500 Swarovski crystals.

If you thought that was a lot just wait until you hear about her 2019 Grammy nails. At the award show, Cardi wore a one-of-a-kind, vintage Thierry Mugler dress, and alongside the dress, her nails were covered in nearly 200 crystals. While you may be thinking that's less thank her Super Bowl manicure (and it is), the part that makes it the most extra (in the best way) is that her nail look was completely covered with gloves.

Maybe you can't afford to encrust your nails in Swarovski crystals then cover them up, but that doesn't mean you can't get Cardi B's nail looks. Cardi's "CLOUT" video nails are just a $10 decal away, and that seems doable.