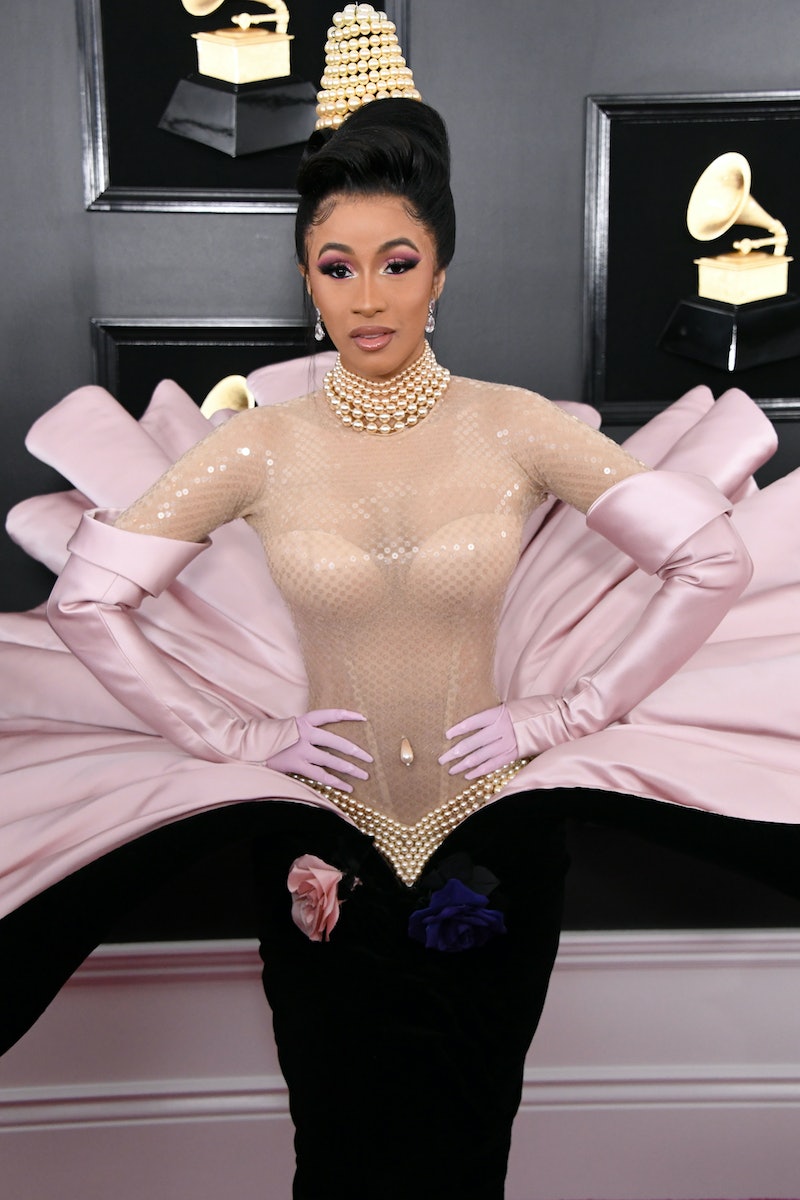 In case you didn't hear (but you probably did), Cardi B basically won the Grammy Awards on Sunday. From her Birth of Venus inspired dress to her win for Rap Album of the Year, it a major night for Cardi. Anyone familiar with her fashion knows that Cardi B's nails are a major part of basically all her ensembles. However, they didn't seem to make an appearance that night, and for a celebrity who has an unabashed love for nail art and an incredible friendship with her nail artist, that seems weird, right? Don't worry, just because Cardi B wore gloves to the Grammys doesn't mean her nails weren't as glam as ever underneath that stain.

According to PopSugar, Cardi B's nail artist Jenny Bui did in fact give the rapper a full on, glam nail for the event despite those gloves she wore on both the red carpet and to accept her awards. The outlet actually spoke with Bui who explained that the design featured a middle stone on each finger and smaller stones surrounding it. In total Cardi B actually had nearly 200 Swarovski crystals on her nails. No one can ever say that the rapper isn't dedicated to her nails, even if she's wearing gloves.

Of course, this is far from the first time that Cardi B's nails have been a big freaking deal. She's kind of known for her claws, and in recent weeks, they've been in the news.

While Cardi B didn't take the NFL up on their offer for her to perform at the Super Bowl (she refused as a way to support Colin Kapernick), she did make an appearance during the game — kind of. If you're not very interested in football, then you probably already know that Cardi B actually starred in a Super Bowl commercial, and honestly, it was epic.

In the commercial, Cardi B used her iconic "Okurrr" to say okay to Pepsi over Coke, and while her sequin covered mini dress, long dark locks, and makeup looked great, her nails kind of stole the show. Why? Well, if you thought 200 Swarovski crystals for the Grammys was a lot, the rapper went all out for her Pepsi Super Bowl commercial. Her nails were red, white, and blue (the brand's signature colors) and covered in 500 crystals! Yes, really. If you thought 200 was a lot, these nails are so much more.

While in the grand scheme of things, Cardi B's Grammy nails may seem like a small blip. After all, she did win Rap Album of the Year, give a stellar performance, and crush the red carpet all in one night. However, one of the many things people love about the rapper is how authentic she stays to herself. Whether she's making you laugh or threatening to "dog walk" Tomi Lahren on Twitter, Cardi is always Cardi. Honestly, Cardi B's nails are one of her signatures, so knowing that they were still fab underneath those gloves is still a totally Cardi move.