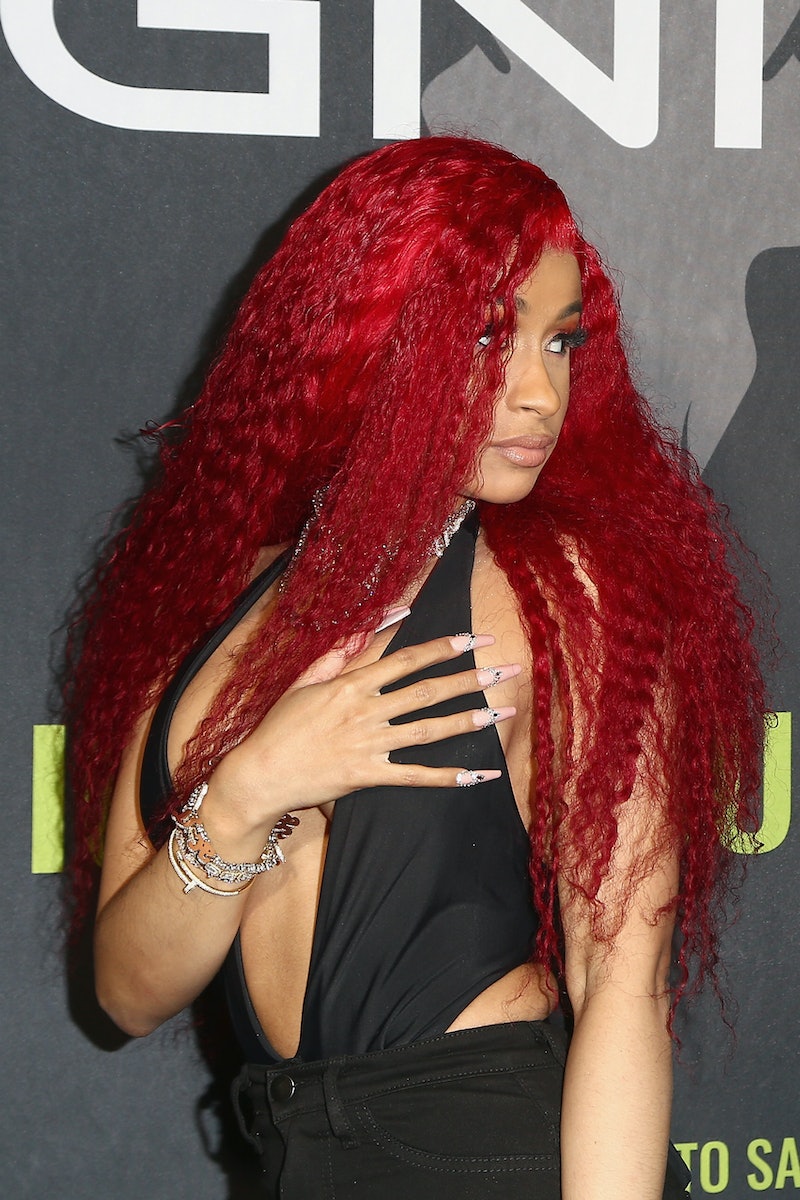 On Tuesday, Feb. 19, several outlets confirmed that Khloé Kardashian and Tristan Thompson had broken up in the wake of a reported cheating scandal involving Thompson and Kylie Jenner's BFF, Jordyn Woods. Shortly thereafter, Cardi B responded to Khloé and Thompson's split in a lengthy video via Instagram Live, according to E! News. Seeing as how her husband, Offset, had been the subject of infidelity rumors in the past as well, Cardi's comments on the drama likely came from an incredibly personal and undoubtedly supportive place.

Just to clarify, Thompson and Woods' rumored hook-up, as initially reported by Hollywood Unlocked and TMZ, has yet to be confirmed. Bustle previously reached out to reps for Woods, Khloé, and Thompson, but has not heard back. However, this isn't the first time that the Cleveland Cavaliers player has been accused of being unfaithful to Khloé.

Anyway, Cardi had some choice words for haters on social media who were supposedly "celebrating" Khloé's assumed pain about the whole situation, and she did not hold back — at all. It's not like Cardi has ever been concerned about voicing her unfiltered opinion in the past, though. That's one of the reason her fans love her so much.

"Y'all know I been through some sh*t," the Bronx-born rapper started in her video. "I'm seeing this whole Khloé Kardashian thing, and everybody is just like, celebrating that that happened to her, and it's like, why?" she continued.

Cardi then alluded to Thompson's previous cheating scandal — news of which broke shortly before Khloé was set to give birth to the couple's daughter, True — and earnestly asked fans, "Like, why do you guys keep wishing that on a woman? Especially a woman that has a daughter?" Good question. It's probably not the first time she's wondered that either.

Back in January, Cardi got real about her own experience with infidelity in an Instagram comment that has since been deleted. When one fan asked why she seemingly continued to tolerate that kind of alleged behavior from Offset, the rapper reportedly replied, "No, it's not right for a n***a to cheat ... This sh*t happens to everyone ... People handle they relationship different soo."

Cardi continued to reflect on what she went through with Offset via her recent Instagram Live post, and admitted that in situations like this, "your heart shatters in pieces." She then went on ask why people seem to "[enjoy] other people misery, knowing how much it hurts when a guy that you're in love with, especially the father of your child, does something wrong. It's just so sad."

Cardi B's marriage to Offset has recently come under the microscope again after Cardi announced they'd split back in December, then appeared to have reconciled before this year's Grammys. Some fans might not necessarily agree with the couple's choice to give their relationship a second chance — similarly to when Khloé and Thompson decided to try and make things work after the birth of their daughter — but you know what? At the end of the day, it's nobody's business but their own.