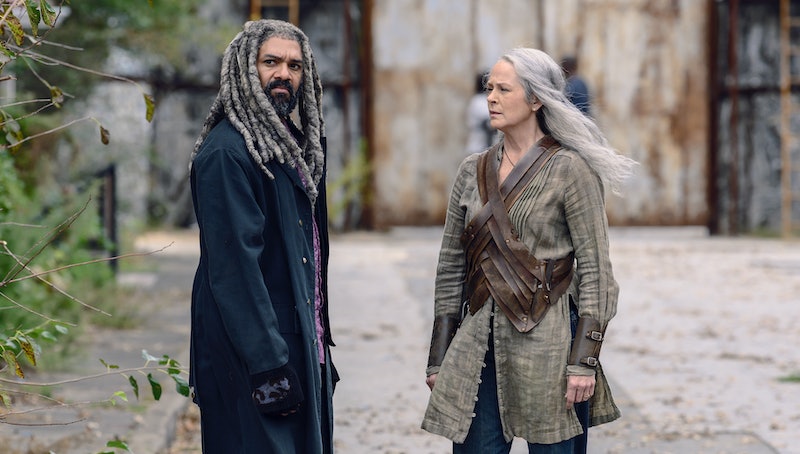 Spoilers ahead for The Walking Dead Season 10 premiere. While fans have long shipped Carol and Daryl, the romantic relationship she had with Ezekiel was still one to be admired. Which is why it was hard to watch Carol and Ezekiel breakup in The Walking Dead Season 9 finale. The pairing was always a bit unconventional considering Ezekiel's flair for the dramatic and Carol's harsh pragmatism, but they had genuinely cared for one another until the Whisperers' massacre at the fair took its toll on their relationship. In the Season 10 premiere, Carol makes it clear that she has absolutely no intention of reconciling romantically with Ezekiel.

Season 9 saw Ezekiel and Carol together and they made their union official when Ezekiel proposed marriage. Six years later, they were married and happily ruling over the Kingdom with their adopted son Henry. However, when Henry was killed by the Whisperers at the Kingdom's fair, Carol and Ezekiel's relationship suffered. She began to pull away from Ezekiel in the months following.

When the Kingdom fell and they had to relocate to the Hilltop, Carol chose to end their marriage and live at Alexandria without King Ezekiel. "I'll never regret the fairytale," Carol told him as she gave him his ring back.

After the Season 9 finale, showrunner Angela Kang explained to CinemaBlend that this breakup was about Carol starting a new chapter in her life. But she noted The Walking Dead also wanted to address how some couples respond to the death of a child. "The sad reality of couples who lose a child is that it often breaks up the marriage. Whether it's because [the death] itself is the thing that causes the problem, or it just reveals the cracks that were always there," Kang said. "We wanted to kind of explore the truth of that happening."

Carol confessed to her bestie Daryl in the Season 9 finale, "I feel like I'm losing myself again." As evidenced by the breakup, she felt like she needed to be without Ezekiel to find herself. Right before she ended their relationship, his jealously over Carol's connection to Daryl led to Ezekiel asking Daryl to stay away from her, showing a rather unpleasant side of the usually jolly king.

But sorry, Ezekiel. The Season 10 premiere highlights just how unbreakable Carol and Daryl's bond is — even if it is purely platonic. Another time jump has occurred in Season 10 and Carol and Ezekiel are living separate lives. Ezekiel is training at Oceanside while Carol has taken to fishing at sea. When she comes back from her latest voyage, both Ezekiel and Daryl are waiting for her on the dock. Carol seems genuinely pleased to see Daryl (and Daryl's potential love interest Connie). Yet, Carol is not so interested in seeing Ezekiel. Her ex looks longingly at her and tells her, "You look good." While she's not unpleasant, Carol quickly dismisses Ezekiel to go off with Daryl.

Even if she loves her life at sea, Carol has been fleeing from the pain of losing Henry. But she will have to learn to coexist with Ezekiel if she still wants to be a part of these communities. More importantly, Ezekiel must move on from Carol for both of their sakes. Although he continues to be hung up on Carol in "Lines We Cross," the Season 10 trailer showed Ezekiel kissing Michonne. After all the loss they have suffered, Michonne and Ezekiel do deserve to find love again. But as Michonne seems poised to find Rick in his spinoff movies, Ezekiel might have his heart broken all over again in Season 10. And based on her cool response to him in the premiere, Carol won't be by his side to help heal his pain.