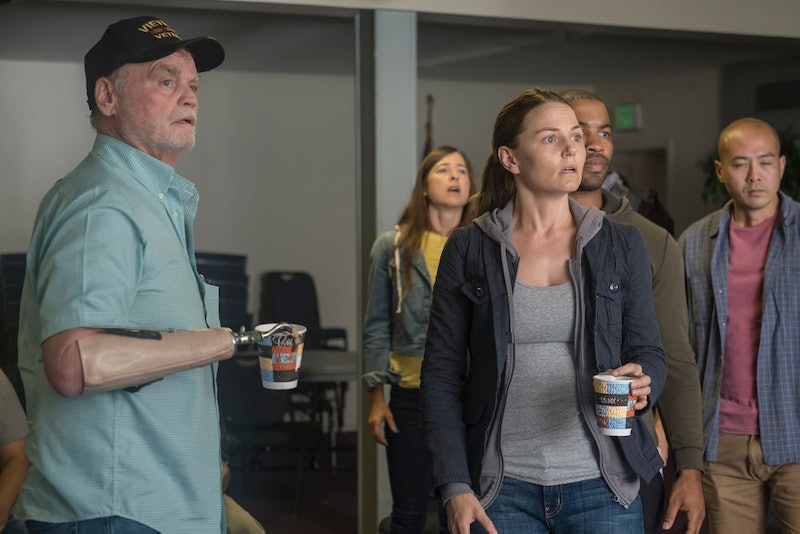 Spoilers ahead for This Is Us Season 4. Kevin went on a long rant during the Oct. 8 This Is Us episode about how hard his life has been lately. He mentioned his recent fall off the wagon, turning down an awesome movie project, and breaking up with his girlfriend Zoe. But he may have already met his new love interest, because a Cassidy and Kevin hookup on This Is Us is looking promising.

Cassidy was actually at the AA meeting where Kevin spilled his guts about life's recent struggles, and she's one of two people who laughed at him for his problems being "stupid." (His uncle Nicky was the other one.) Eventually, Kevin got it, too, and the three of them couldn't stop laughing to the point where they almost got kicked out of the meeting. That special brand of Pearson humor appears to run strong in Cassidy just like in Kevin, and that bodes well for a potential romance.

Cassidy, played by Jennifer Morrison, has a "substantial" role in Season 4 according to TV Line. Creator Dan Fogelman told The Hollywood Reporter that Cassidy's story extends "many, many episodes ahead" and is closely entwined with Kevin's. "She's going to play a big part, clearly, in Kevin's story moving forward and obviously Nicky's," Fogelman said. "It's a very interesting and it's very unusual and deep and a very important relationship for Kevin moving forward, and obviously for Nicky as well."

He added, "I think it goes in a funny direction, in a weird direction and occasionally dark direction that I think will be exciting for people, especially in relationship to Kevin."

So far, in just two episodes, viewers have learned that Cassidy was overseas with the military and that her return home has been rocky. She's dealing with PTSD and an alcohol dependency. Her husband kicked her out after her PTSD flared up and he worried about the safety of their child. But Kevin knows how she feels at least with regards to the alcohol dependency, and he's been helping Nicky with his PTSD. He would be an understanding partner for Cassidy, and he's already hit it off with her son. The two played video games together while in the waiting room at the veterans counseling office. And, yes, Cassidy did think it was strange that a grown man was hanging out with her kid, but she just hasn't gotten to know Kevin yet. This could be Kevin's chance to be a father like he couldn't be with Zoe and for Cassidy to move on from her marriage.

Fans have been theorizing since back when Cassidy's character was announced that she and Kevin would get together. And the laughter they shared at the AA meeting just furthered those hopes. Kevin's relationship with Zoe is firmly in the past since they want different things and his door with Sophie is also seemingly closed since the last he saw her she was getting married to another man.

Even if she and Kevin don't get together, it seems like she will be a big part of this chapter of his story. Fogelman told Entertainment Weekly that things start out more platonic, but that romance isn't off the table for them entirely. "I can't say too much about it other than the relationship is complicated, it's formative, and it's a very deep, interesting, bizarre relationship. And whether or not it's ever romantic is for the series to delve into a little bit later on," he said.

Perhaps Cassidy will just befriend both Kevin and Nicky and they can all help each other with their mutual struggles. A love storyline for them both would be great, but fans will probably take friendship if they have to. Whatever keeps Cassidy and her dynamic with Kevin on the show for longer.