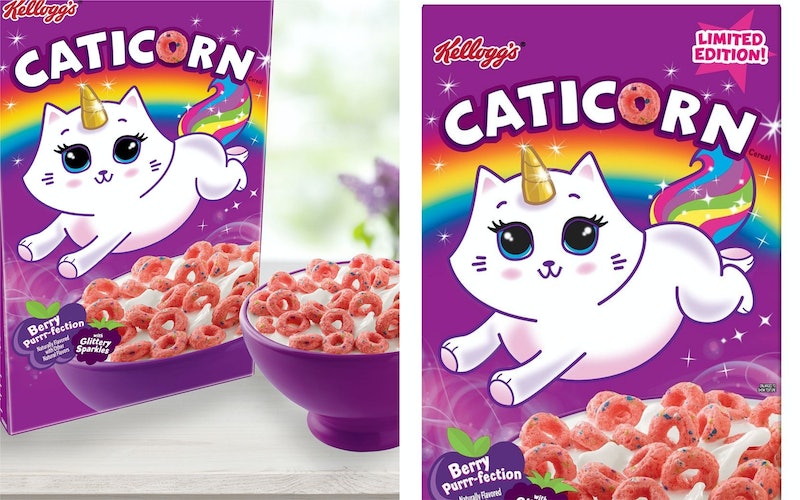 To anyone who has ever tried to tell you that magic isn't real, here's your chance to tell them to extremely suck it: Sam's Club just released a Caticorn Cereal from Kellogg's, combining your love of unicorns, cats, and breakfast in a manner so magnificent that there is no other earthly explanation for it. The bright purple box features a majestic caticorn jumping over a rainbow above the cereal, which comes with — brace yourself — EDIBLE GLITTER, and a flavor described as "Berry Purrr-fection". Did I just black out and become a cat person? The power of this cereal truly knows no bounds.

The limited edition cereal is an exclusive to Sam's Club through March, where it's sold in boxes of two for $5.98 — meaning you can buy a pack and snag one for yourself, and one for whichever one of your friends you like the most, since I'm assuming all of them would be into Caticorn Cereal. After that, the cereal will be available in other retailers as well; that said, Sam's Club does seem to have the exclusive during pea "unicorn season" (as decreed by the Starbucks Unicorn Frappuccino, and the internet).

Arguably the most magical (or, as Sam's Club points out, "meow-gical") part of this cereal is that you don't even have to show your face in public to get your hands on it — you can ship it directly from Sam's Club's website. What a time to be young and alive and square in the middle of the Lisa Frank phase that your parents hoped you would shed in junior high!!!

The other piece of good news is that we all finally found the life hack that will turn us into a "morning people" once and for all: cereal with packed with enough sparkles to make your digestive tract glitter for days!!!

For anyone keeping up with Sam's Club, this foray into magical food is far from surprising; in fact, the chain may be the leader in affordable unicorn snacking. In 2018 Sam's Club released a massive three-tier unicorn cake that retailed for $69.98 and served approximately 66 people; they then turned around and topped that magic by releasing a Christmas unicorn cake for the holidays. The bounty of unicorn-themed things truly never stops, Sam's Club was also responsible for some of those massive Instagrammy pool floats you saw all over the internet last summer, including a unicorn one.

But if 2018 was the year of the unicorn, Sam's Club has just made a bold move in announcing it the year of the caticorn instead; may this be the year we are also blessed with caticorn cakes, with caticorn pool floats, with caticorn-themed weddings and baby showers and Galentine's Day parties galore. Never were two worthy creatures combined more fittingly or more perfect for this internet; and never will we see another cereal that captures the heart of our obsession quite like this one at Sam's Club does. Just make sure to grab it while you can — and save at least one bowl of it for National Unicorn Day, which hits on April 9!

More like this
On TikTok, Tinned Fish Date Night Is The Latest Viral Food Obsession
By Emma Carey
8 Completely Unserious Tips To Make Your Cuffing Season A Success
By Ginny Hogan
Why TikTok Is Flooded With Controversial Videos About "Pick Me Girls"
By Courtney Young
This TikTok Song About An Unrequited Romance Has FYPs In Shambles
By Emma Carey
Get Even More From Bustle — Sign Up For The Newsletter