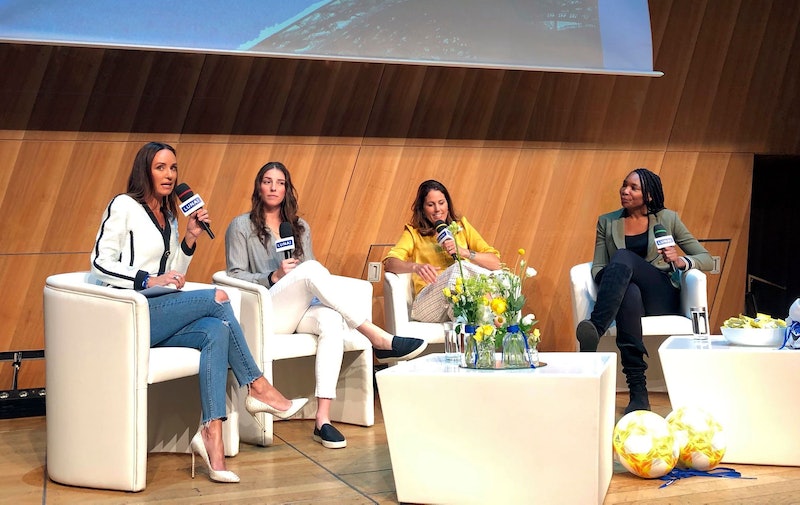 While the gender pay gap has been a hot button issue for years, and some progress has been made, it's crucial to talk about the leaps and bounds we still have to go in the fight for pay equality. Just this past March, the U.S. women's national soccer team filed a gender discrimination lawsuit against the U.S. Soccer Federation, because despite breaking records on the field, the female soccer players are not being compensated the same as their male counterparts. Inspired by the team's advocacy and tied to the FIFA Women's World Cup in Paris, LUNA Bar brought together other game-changers in the fight for equal pay, including Catt Sadler and Venus Williams, to talk about their experiences and how to keep moving forward.

Back in 2017, Sadler announced she was leaving E!, where she worked for more than a decade, after discovering her male colleague was making twice her salary. Since then, she's continued to speak out, making her a fitting host for the Someday Is Now Salon, which I attended while on a press trip from LUNA Bar. At the June 15 event, Sadler was joined by Hilary Knight from the U.S. ice hockey team, who's won multiple championships and Olympic medals; Julie Foudy, a former captain of the women's soccer team and one of the most accomplished in the sport; and tennis champ Venus Williams, whose advocacy sparked Wimbledon's 2007 decision to pay male and female athletes the same.

While onstage inside the Eiffel Tower, these trailblazing women shared plenty of advice for standing up for yourself and what's right. Their words can resonate, whether you're an athlete or not.

Growing up, Sadler was taught "anger is bad, don't get upset, don't be mad." But when she learned about the pay discrepancy at her job, she was "really ticked," explaining, "For me, it was the anger that fueled me" to take action. Similarly, Knight said, "Anger was sort of the rocket fuel for us," speaking to how in May 2019, more than 200 women's hockey players announced they would skip the season until conditions improved. (The team stated at the time, "We cannot make a sustainable living playing in the current state of the game," and mentioned that in addition to receiving insufficient salaries, they had no health insurance.)

"For so many years, we were just grateful to be there and we were told to be grateful," Knight recalled, but then that mindset shifted. "You know what? Enough is enough. I'm done with being grateful. We don't have the equitable support that we need."

Foudy embraces the feeling as well. "I actually get excited when I get angry, I'm like, 'OK, good, she's alive,'" she joked, since it takes a lot to make her mad. "I do think if you can take that [anger] and channel it and say, 'OK, I'm not going to get stuck in my junk... I'm gonna take this in a positive space,' you are going to shift the world as we're seeing."

While the fight for equality can be frustrating and draining at times, these women continue to stay motivated. For Knight, it's the next generation that propels her forward. She elaborated, "It's far greater than me individually or my teammates. It's really about that young girl that's at our game and needs to see something to be that." Knight wants to "really push the sport forward ... so when [that girl] grows up, she doesn't even have to think about this stuff."

Sadler couldn't help agreeing about raising her voice to create a better future. "I now feel like it's an actual duty and an obligation at this point," she said. "We have to change the landscape, and if we don't, we won't have done our jobs."

Speaking to that same goal, Becca Roux, executive director at the U.S. Women's National Team Players Association, told Bustle after the event, "You hope that it has the ripple effects that go on to not only the next generation of women soccer players, but other athletes in other areas and other women in all industries."

Take Things Into Your Own Hands

Instead of waiting around for someone else to do something, Knight explained, "If not me, then who? I can't pass up that responsibility." Williams learned a similar lesson from her mother. "You stand up for what's right and you don't stand up for what's wrong... That really helped me in my battle for equality and the one that continues to go on, because when it's wrong, you have to stand up and there's work to be done," the tennis star said.

Illustrating that theme, LUNA Bar decided to support the women's soccer team on Equal Pay Day 2019 in a major way. "We discovered there was this inequity in the roster bonus for when a team is selected to the World Cup," Ritu Mathur, LUNA's senior director of Brand Marketing, explained to Bustle. "And to us, it was just so strange. It's the same thing — you're either selected to this team or you're selected to that team, and one happens to be men and one happens to be women."

So the company took it upon themselves to close that gap, surprising each team member with the $31,250 roster bonus difference, as seen in the video above. Kit Crawford, the co-CEO of LUNA Bar, told Bustle, "We always say, 'Maybe someday we'll have this, or someday we'll have that.' Someday for me is right now. We need to start to pay people equally."

As for how change can happen, Williams suggested, "Definitely keeping the conversation going... and realizing this is real. This is affecting people around the world everyday." Crawford also hopes "the conversation gets louder." Luckily, with women like these keeping the momentum going, the discussion won't go away anytime soon, nor should it.

More like this
Beyoncé & Madonna’s “Break My Soul” Remix Honors A Group Of Black Icons
By Stephanie Topacio Long
Lewis Hamilton Turned Down A Role In 'Top Gun: Maverick' For This Surprising Reason
By Darshita Goyal
Harper Teasing David Beckham’s Dad Dancing Is Beyond Adorable
By Frances Stewart
The Spice Girls & Adele Lead Girl Power Celebrations For Lionesses’ Euros Win
By Sophie McEvoy
Get Even More From Bustle — Sign Up For The Newsletter