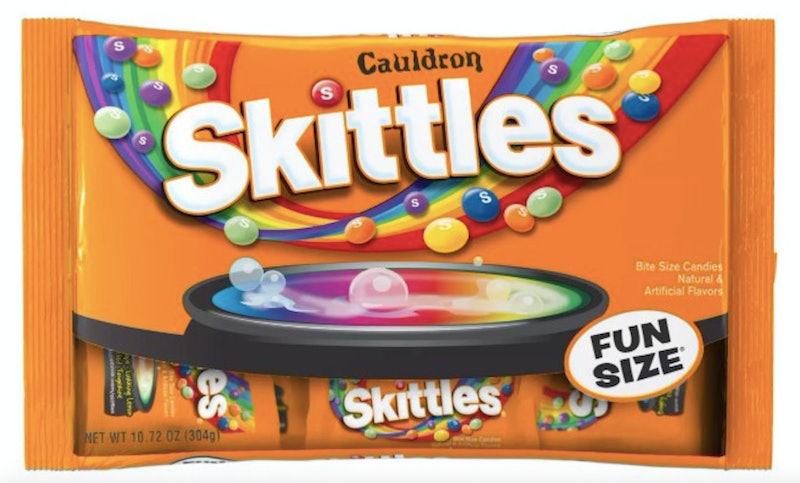 Skittles are one of my ride-or-die candies. Halloween is absolutely my ride-or-die holiday. So when I hear about special Halloween-themed Skittles? You’d better believe those are going on my shopping list, stat. Such is the case with Cauldron Skittles, which are officially returning for Halloween 2019 — and even better, you can get them now. You heard me. You don’t have to wait until October, or even September. Target has the Fun Size in stock online already, and, uh… well, let’s just say it’s about time I made a new Target order, isn’t it?

Cauldron Skittles originally debuted during the 2016 Halloween season and have made a triumphant return every year since. The mix includes five flavors, two (or three, depending on how feel about “tangerine” vs. “orange) of which are simply renamed versions of regular Skittles flavors: Twisted Tangerine, Boogey Berry (or Bogey Berry in the UK), Lurking Lemon, Petrified Pear, and Gripping Grape. Most of the flavors are the colors you’d expect them to be, as well — lemon is yellow, pear is green, tangerine is orange, and grape is purple — with the exception, perhaps, of Boogey Berry. That one’s blue, which I’m assuming means it’s meant to be a sort of blue raspberry flavor. (Then again, it could also be blueberry or mixed berry, so… do with that what you will.)

I’ll be honest: When I originally heard about Cauldron Skittles, I was kind of hoping they’d have some kind of… gimmick. Maybe a visual gimmick, like the Skittles all being the same color, leaving you to guess what you got each time (but without the horror of rotten zombie-flavored Skittles lurking amongst the rest). If they’re Cauldron Skittles, where does the cauldron come into play? If the Skittles were brewed up inside said cauldron, like a potion of some sort, then what effect did the cauldron have on them? It, uh… didn’t, is implication; Mars Wrigley just slapped a cauldron on the label in order to make the candy somewhat seasonally appropriate. I can’t help but feel that it’s sort of a missed opportunity.

But even without any sort of gimmick beyond some snazzy-looking packaging, it seems that Cauldron Skittles are pretty dang good. The website Humanstein, which focuses on all things creepy, kooky, mysterious, and spooky, reviewed them when they were first released in 2016 — and the verdict was resoundingly positive. For what it’s worth, it does seem that Twisted Tangerine is different than the regular orange Skittle flavor; wrote Humanstein mastermind Nathan Steinmetz:

“A lot of candy companies just make orange candy and call it tangerine after the fact to sound special, but that’s not the case here. Twisted Tangerine is definitely different than orange, a more natural flavor with significantly less tartness than a traditional orange Skittle. They’re a little more mellow and the flavor is definitely distinct.”

Petrified Pear also earned a thumbs up from Steinmetz, who called it “softer,” “more organic,” and “a ‘real’-tasting fruit flavor.” Bogey Berry ended being Steinmetz’s “personal favorite,” with a “unique” flavor he couldn’t quite pin down. They’re not quite raspberry; they’re not quite blackberry; they’re quite black currant; but no matter what they, they’re, y’know, good.

Besides, Skittles has already been putting out tons of gimmicky variations on their classic theme recently; on top of the whole Zombie Skittles thing, we’ve also seen Skittles ice cream, yogurt-covered Skittles, shell-less Skittles, and drinkable Skittles emerge on the horizon lately, so there are plenty of gimmicks to go around. There’s also something to be said for simple, well-done thematic packaging — and Cauldron Skittles’ orange bag and bubbling cauldron are about as good as it gets.

Cauldron Skittles can be found at Target, among other places; they even come in Fun Sizes perfect for trick-or-treaters.