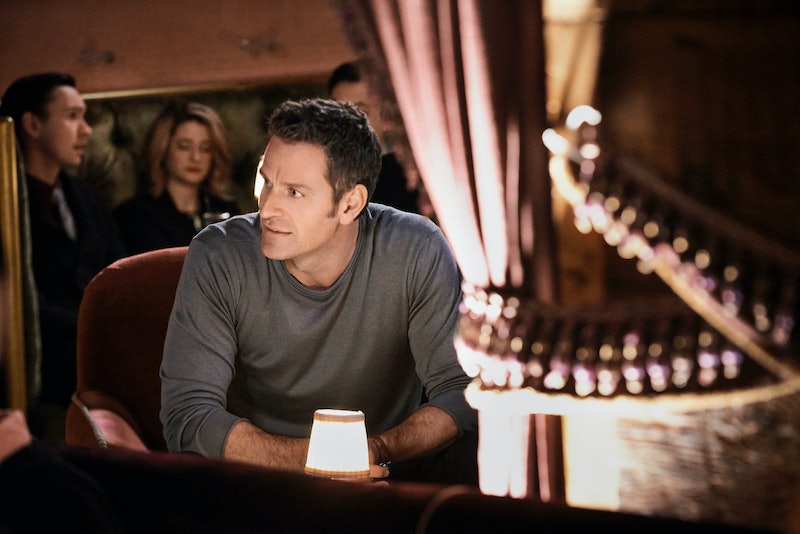 Well, a handful of episodes into Season 6 of Younger and the show has eliminated one of the main conflicts of the season — Charles and Liza, in competing publishing houses, gunning for the same books and ultimately ending up disappointed. While it may have done wonders for their love lives, there's no way that it would have made their love last even longer. Now, Charles has returned to Millennial on Younger, but don't think this is the end of the drama.

Leave it to a microdose of LSD — though that's not what they call it legally on the show — to show Charles that it's all about family or something else. He mentioned that his grandfather mortgaged his whole life to keep the business going at the expense of his family, and Charles doesn't want to lose his family — aka Kelsey, Diana, Liza, and the rest of the gang at Millennial.

Then, Charles has Kelsey buy Millennial for a buck and Charles is now an editor at Millennial and everything is fine again. It's like the end of It's A Wonderful Life and the snow is falling and everyone is smiling and looking on at each other.

While it all sounds like a good idea that Charles joins the crew again, how likely is it that Kelsey will automatically forgive Charles for such a huge betrayal? He gave her the role as publisher, and he's not taking it away, but because he gave her the role as publisher, he had to go out and create a new company just to steal authors away from Millennial. Charles hurt Kelsey. You don't just get over that.

Not to mention leaving Diana in the dust — he apologized to her for bailing on 20 years of working together, but is it really that easy? Charles has the benefit of being hunky, rich, and white, so suffice it to say he hasn't had a lot of roadblocks in his life. When he decided to come back to Millennial, it's doubtful any of this was on his mind.

Besides the interpersonal relationships at stake with Charles coming back to Millennial, what about Charles himself? To go from publisher to founder to... editor is a big demotion. He's not used to having a boss, to having someone to answer to. Charles created Kelsey, and it seems now that he's about to get a dose of her being the boss. He might not like it, which will cause issues once again between Charles, Kelsey, and Liza.

Oh, and speaking of Liza, Charles likes to remind us every chance he gets that he left Millennial behind so he could be with Liza — but she didn't ask him to do that. They probably could have figured out a way to be together without him losing his livelihood, no? For your boyfriend to quit his job for you is one thing, but for him to constantly remind you of it is another. That could get old fast, especially if you're seeing him every day.

Charles' intentions on coming back to Millennial certainly were pure, but did he really think them through? With Younger just renewed for Season 7, there's plenty of time for everything to go wrong.

More like this
Here’s Why Danny Masterson’s Hyde Isn’t In 'That '90s Show'
By Brad Witter
The 'New Amsterdam' Series Finale Opens An “Unexpected” Door To The Future
By Brad Witter
The 'Gossip Girl' Reboot Creator Is “Looking For A New Home” To Air A Potential Season 3
By Brad Witter
'The Queen’s Gambit' Season 2 Tweet Wasn’t From Anya Taylor-Joy
By Mary Kate McGrath, Jack Irvin and Grace Wehniainen
Get Even More From Bustle — Sign Up For The Newsletter
From hair trends to relationship advice, our daily newsletter has everything you need to sound like a person who’s on TikTok, even if you aren’t.