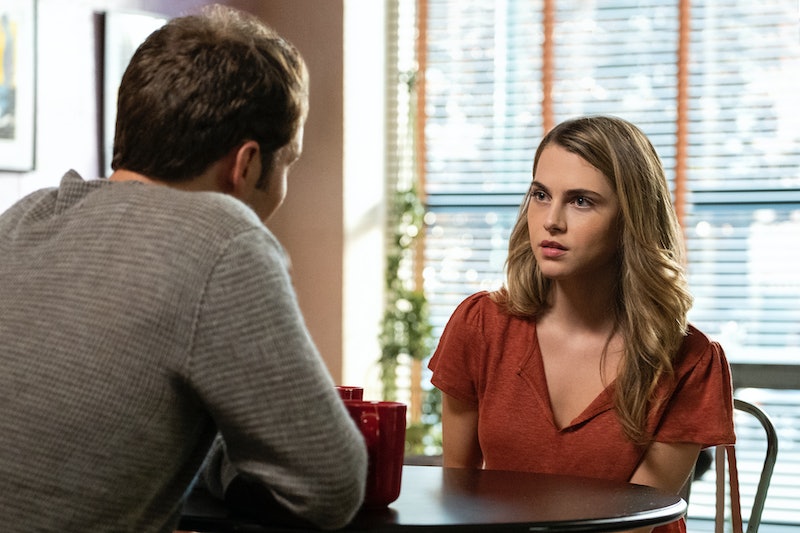 Spoilers ahead for 13 Reasons Why Season 3. 13 Reasons Why is no stranger to tackling controversial subject matter. But when it came time for Anne Winters, who plays Chloe on 13 Reasons Why, to play in integral role in the show's handling of yet another sensitive topic, she wanted to be as informed as possible.

After it was revealed that Chloe was pregnant with Bryce Walker's baby at the end of last season, creator Brian Yorkey and the show's writers decided that Chloe's Season 3 storyline would focus on her choosing to get an abortion. The show wanted to make sure the episode was true to real life, which is why Winters met with a doctor to better understand how someone gets an abortion in California.

"I got to ask her a bunch of questions," Winters tells Bustle of her meeting with the doctor, "and just kind of sat with her for a couple of hours and went through the whole process."

Winters wanted to understand emotionally what it's like for women like Chloe to decide to end a pregnancy. "I think that my biggest takeaway was that this isn’t an easy decision for anybody," Winters says. "But I feel like the women who decide to do it have their own reasons, and I think that they’re valid, each in their own way."

This season of 13 Reasons Why is focused on who killed Chloe's ex Bryce Walker, and in Episode 2, Chloe becomes a possible suspect in new girl Ani (Grace Saif) and Clay's (Dylan Minnette) investigation. Chloe's pregnancy is a secret that leads right to Bryce, so she ostensibly has a motive they think is worth exploring. What they learn instead, though, is how Chloe came to the difficult decision to have an abortion.

The episode follows Chloe as she attempts to make an informed decision on what she should do next. That includes visiting an abortion clinic and understanding the procedure, which is explained in great detail to her and the audience. "The writers wanted to show the journey because that’s what a lot of people don’t see," Winters says.

That journey includes Chloe unknowingly visiting a crisis pregnancy center (an anti-choice facility that's not licensed to provide health care), which tries to talk her out of getting the procedure. Later, she's harassed by anti-abortion protestors on her way into the clinic. None of it is easy to watch, but for Winters, that's not the point. Instead, it's about informing people of everything that unfolds when a woman decides to have an abortion.

For Chloe, that includes a tense conversation with Bryce's mother Nora (Brenda Strong), who tells her that her son comes from a long line of men who shouldn't have been fathers. "My son is no different," Nora tells her over dinner. "In fact, I think he may be worse."

"A hundred percent I think that influenced [Chloe's] decision," Winters says, but she also thinks having a support system in Zach (Ross Butler) gives her "freedom to really weigh her options" and make a choice that is best for her, even if it wasn't an easy one.

At a time when states across the country are trying to pass extreme abortion laws and Planned Parenthood's funding is in question, Winters thinks that her episode could be seen as a political statement. More importantly, though, she hopes it helps women feel less alone. "If you're feeling judged for the decisions you want to make," Winters says, "know it’s your decision and you have the right to do what you want with your body. To do what's best for you."