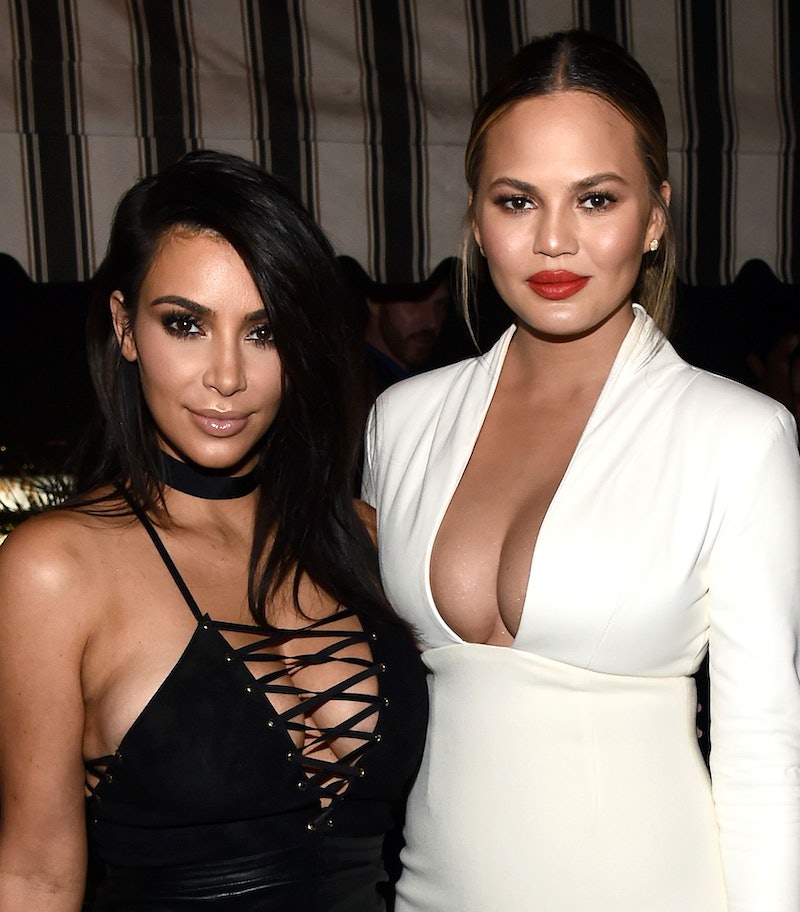 Have you ever been casually scrolling through social media, only to discover a major life update about a friend? An engagement, a pregnancy, a new job, the list goes on. Well, Chrissy Teigen is right there with you, in fact she says it happens "all the time." Except for her, the friend is Kim Kardashian.

While chatting with Bustle to promote Pepsi's new #Summergram campaign, Teigen says, "I learned Kim Kardashian's baby name online... which is funny, because we'll all talk all the time." Even though the two are in constant communication, getting details about her private life doesn't always come easy. "When you do have a celebrity friend of that caliber, you don't want to prod into their lives," Teigen says. "You also don't want to make it seem like you're a gossip or someone that's going to leak it to somebody."

And while the Lip Sync Battle host learned Psalm West's name on the internet, just like the rest of us, she had a bit of a hint. "I knew she wanted something biblical, and I had no idea where it was going to go," Teigen says. Ultimately, she thinks Psalm is "the perfect name."

Even so, Kim K *probably* wouldn't have taken her name suggestions anyway. "I definitely am not good with baby names. Especially if I have a good one, I don't want to share it, because I don't know if I'm going to have another baby, so I keep my good ones that I love [to myself]." Teigen adds with a laugh, "But also, they would never pick the names that I would like, so it's a good friendship."

They may have different taste in baby names, but Teigen couldn't be happier for the Keeping Up With The Kardashians star. "Their family just feels so full and so happy right now," she says, "And I feel they're so content with this number of children and this new life that they have." It's true — in Kardashian's name announcement she shared a text exchange where husband Kanye West wrote, "We have everything we need."

In her own family, Teigen is completely embracing the proud mom role, recently sharing videos of little Luna on the Saturday Night Live stage. While she has "no idea" if Luna will want to be in the entertainment industry, Teigen says, "I'm happy with any path she wants to take... If her dream isn't to be on that SNL stage, then we are totally fine with that. It's just a video we can laugh at 20 years from now."

Still, she can't help but compliment her daughter's creative genes. "I do see her being in the arts somehow. She's really creative. She's very well-spoken for a girl her age. Her imagination is crazy. Her memory is crazy. That stuff she got from dad."

At the end of the day, she and John Legend just want Luna to do "whatever makes her happy." "She's still finding her passions and things that she love. I mean, most people get out of college and still have no idea what they're going to do with their lives, so we've got some time."

Another thing that may take time? Luna and Kardashian's daughter North West becoming BFFs. "I think Luna's a little intimated of North because she's got this cool circle of friends when we go over. And Luna is very much still just a little girl," Teigen explains. At the moment, 3-year-old Luna is closest with her cousin Pasha, but there's still some struggles in the sibling department. "For now, we're just trying to get her to play with [her brother] Miles."

Who knows, maybe Miles and Psalm are the next generation of famous friends. Only time — and Instagram updates — will tell.

More like this
Julia Fox Says She Dated Kanye To “Distract Him” So He’d Leave Kim K Alone
By Jake Viswanath
In 'The White Lotus,' Leo Woodall Gets His Moment
By Gabrielle Bondi
Elizabeth Debicki On Her Approach To The Most Debated Scene From 'The Crown'
By Grace Wehniainen
Michelle Williams Laughs Often About Motherhood Thanks To 'The Fabelmans'
By Marina Watts
Get Even More From Bustle — Sign Up For The Newsletter