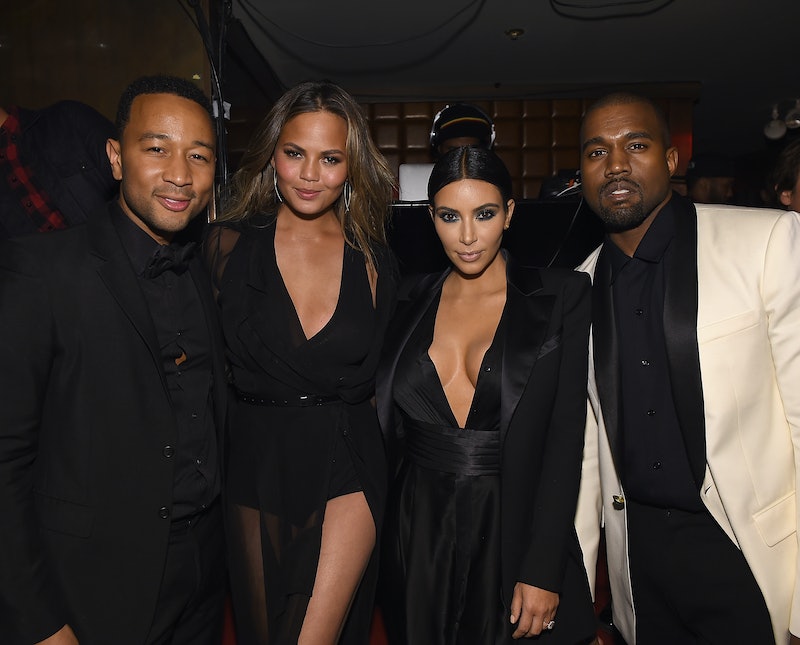 If you've been wondering why Chrissy Teigen hasn't attended Kanye West's Sunday Service yet, the Cravings: Hungry For More author has explained her absence. Teigen actually has a really good reason for not attending the now-famous service held weekly by the rapper in the Calabasas hills. Her explanation makes so much sense that even Kim Kardashian probably isn't mad at her close friend for missing out.

While recently chatting with Cosmopolitan, Teigen made it clear that she's not purposely avoiding the service. Rather, Sunday is the one day of the week that she, her husband John Legend, and their two kids Luna and Miles get to spend together as a family. She said about West's Sunday Service,

"I want to go so badly. We’re just always busy because I feel like Sunday is our only day where John doesn’t have The Voice."

That makes complete sense. Seeing as both Legend and Teigen have extremely busy schedules, why would they want to spend their only day as a family somewhere else? They, understandably, prefer to stay at home together and most likely lounge around without having to go anywhere. Her explanation is totally relatable.

All that said, Teigen would love to go to West's Sunday Service in the future, especially for Luna's sake. She told the publication,

"We want to be able to gather up everybody because I know Luna would love to hear that music so much — it’s gospel and it’s a way to bring everybody together... So we want to go so, so badly, but we just haven’t made it out there."

There's no doubt that one day Teigen, Legend, Luna, and Miles will find themselves at Sunday Service, which was first started by the Kardashian-West family in January. According to ELLE, Kardashian tweeted on Jan. 6, "Our new Sunday Service is starting. Check out the rehearsals on my Instagram stories."

Since then, the Keeping Up With the Kardashians star and others have shared photos and videos from the service on social media. Based on the footage posted, music and prayer appear to be the focus with help from a full choir and band. Tony Williams, West's friend and collaborator, previously discussed the reason for Sunday Service. According to a Jan. 13 video tweeted by @TeamKanyeDaily, Williams said, "The goal is to be able to communicate the message of love effectively."

So far, one of the main highlights from the service has been Kardashian's videos of North dancing. As you can see below, the 5-year-old has the time of her life at the spiritual gathering. Like the reality star tweeted on March 17 about her eldest child, "Her favorite part of the week is dancing during Sunday Service."

Can you imagine if Teigen and Legend brought Luna to Sunday Service? She'd probably have the time of her life listening and dancing to the music. Most likely, Luna and North would end up dancing together.

Who knows when the Teigen-Legend family will join West's congregation, but let's hope whenever they do the Lip Sync Battle star will share video footage on Instagram and/or Twitter for her followers to enjoy.