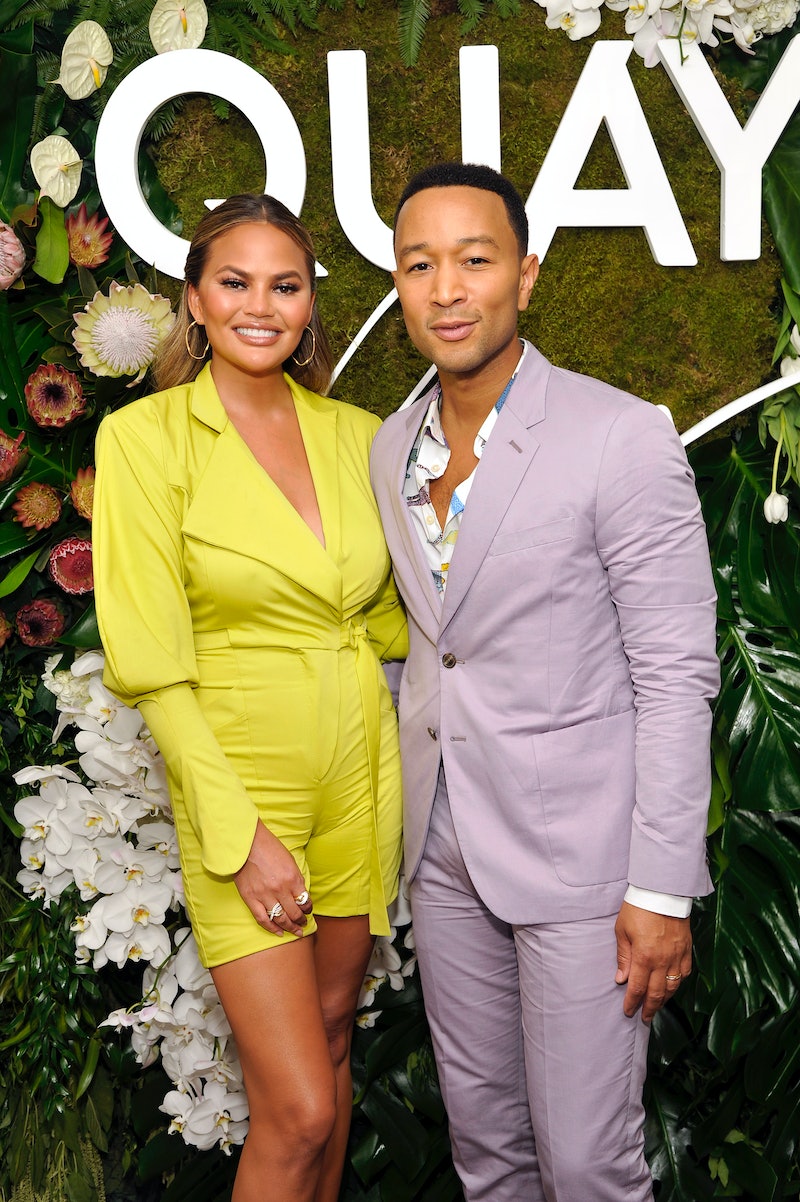 After more than 10 years together, John Legend and Chrissy Teigen are now sharing new, very relatable details about the beginning of their relationship. In the couple's Vanity Fair profile, Teigen revealed she researched Legend very thoroughly when they first started dating to find out what he was all about.

When Teigen and Legend met on the set of his 2006 "Stereo" music video, the singer's career was in the spotlight. Teigen was just starting her modeling career and got cast in the video after a mutual colleague — a cameraman who had previously photographed her — showed Legend her pictures. "He was kind of known at the time for either being in the closet or a modelizer," Teigen recalled to Vanity Fair about her now-husband. "I used to go on the websites and it was always either how I was his beard, or how he paid his past serious girlfriends, or how he was with some new model. Oh my god, I would read everything." But regardless of whatever rumors Teigen may have discovered about his past or their own relationship, she and Legend stuck together.

Legend told the magazine that things between him and Teigen "got serious pretty quickly," in part because Teigen entertained him so much via text message. "What people respond to in her tweets today was the same energy in those texts," he said. "I didn’t know that I wanted someone funny until I was actually with someone funny.”

In those early days, Teigen shared that she didn't have much money, and Legend would sometimes wire her cash to Western Union and reserve a room at the Ritz-Carlton for them when he was in town playing a concert. Now, things are much different — Legend has landed himself an EGOT, while Teigen is known for her modeling career, her cookbooks, her TV appearances, and of course, her Twitter personality.

This isn't the first time that Legend and Teigen have spoken about the early days of their relationship. In a June 2019 interview with Access, Legend said they had "instant chemistry." "It was at least lust at first sight for both of us and then, you know, obviously it developed in that day and that moment,” he said of meeting Teigen on his video set in '06.

It's been 13 years since that first meeting and a lot has changed. Now, Teigen are Legend are married with two kids — and presumably a lot less internet research is going on.

More like this
Chrissy Teigen Is Pregnant After Resuming IVF Following Her 2020 Pregnancy Loss
By Grace Wehniainen
Who Is Tatiana Maslany Dating? The 'She-Hulk' Star Is Married To 'A Locke & Key' Actor
By Radhika Menon
'Indian Matchmaking's Arshneel Is Keeping His Potential Courtship With Rinkle Private
By Radhika Menon
'Selling Sunset's Jason Oppenheim Has A New Model Girlfriend
By Alyssa Lapid and El Hunt
Get Even More From Bustle — Sign Up For The Newsletter