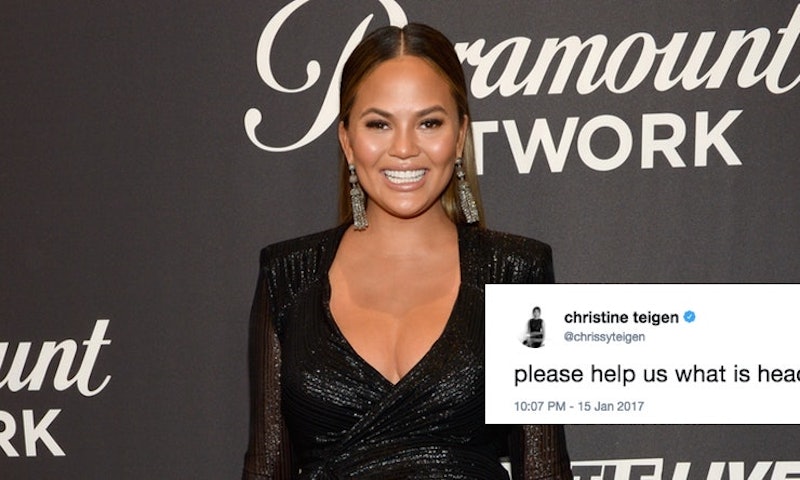 Chrissy Teigen's latest tweet might need a little explaining, so let's dive in. The whole situation began last month when Teigen asked Twitter what "headass" means, and now, when you Google "headass," Teigen's photo pops up. No, surprise, she isn't exactly thrilled to have her image associated with an insult that Urban Dictionary says is a synonym for "idiot." To show how much she isn't a fan of this, Teigen tweeted one very short word that became even longer and sadder with all those extra Os: "Nooooooooo." She said so much with so few characters that you can practically feel her pain.

It was a fan who brought this Google predicament to Teigen's attention, tweeting: "If you google search 'headass' a picture of @chrissyteigen pops up lmfaoooo." And it's true, when you search the term the first thing that pops up is Teigen's picture from a Refinery29 article titled, "Chrissy Teigen Just Taught Us A New Word."

What's better than Teigen's photo is the text from the Jan. 16 article that accompanies it:

"Some think the Urban Dictionary definition is wrong, and say 'headass' is more of an adjective than a noun. Now that, thanks to Teigen, it's on the public radar, will 'headass,' like 'lit' and 'woke,' move from being generally used in African-American communities to widespread overuse by everyone?"

Back in January, Teigen tweeted about a conversation she had with her husband John Legend about what the word "headass" meant. See, neither Legend nor Teigen knew — "so we're both lame," she tweeted — but she knew that Twitter would be able to help. And one fan did... after googling it.

What they found was the top Urban Dictionary listing for the word, which said it was a "generic insult" and "an insult that attacks a person's intelligence." Basically, it's another word for "dumbass."

But it was then that the cruel, cruel irony of this whole thing set in for Teigen. "Gasp. It's me," she tweeted. "I am headass." That tweet ended up getting 6,500 retweets and a whopping 20,000 likes. It turns out, Teigen's curiosity was both a blessing and a curse from the Google gods. And thanks to stories like this one, it might be a while before Teigen's photo stops showing up when you search the word.

The "headass" conundrum didn't end there, though. Fans started questioning whether Teigen was using the word correctly. Was it an adjective or a noun? Could Teigen be a headass, or was she acting like a headass? Even now, it's still unclear so after all of this the question of what the word means is a mystery not just to Teigen, but the rest of the Twitterverse.

Teigen, who is expecting a baby boy, has spearheaded many important debates over the course of her time on Twitter, but over the course of the last month she's been especially profound. Last month, she had fans trying to solve the mystery of the disappearing toilet, and just a week before that she ended her feud with Sophia the Robot. Just this week, she gave her take on the rumored Doritos for ladies: "The only quiet chips are stale chips. This Tuesday I’m voting #no on #ladychips." But this headass discussion might be the most important.

Teigen is definitely taking one for the team. She taught fans a new word, and now has to pay the price by being the literal face of this debate. Don't worry, though, Teigen is already on to the next thing: the "travesty" of paparazzi in the supermarket. She might not know what headass means, but she knows that she prefers no photos while she's shopping. So at least fans got some clarity on something.