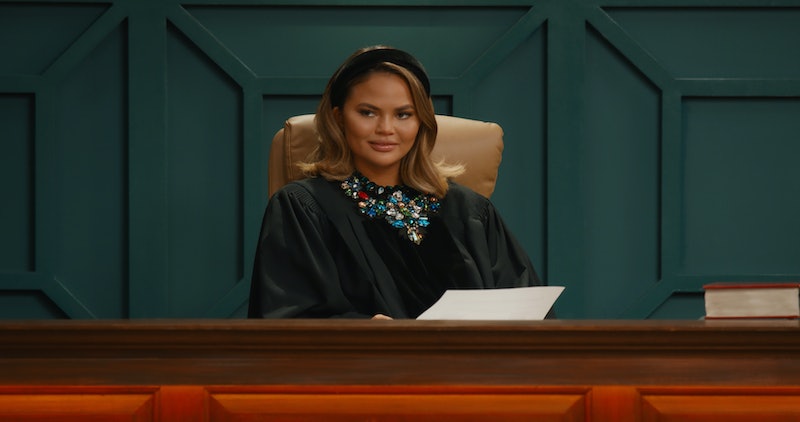 Chrissy Teigen is not your average judge. Her bedazzled robe collars and stilettoed heels tip viewers of Chrissy's Court on Quibi off that this is a show about Chrissy first, and the law second. Though she's not, in fact, a real judge, the decisions she makes on her show are contractually binding.

Chrissy's Court is a chaotic mashup of Teigen’s wry Twitter feed and Judge Judy. Each six-minute episode follows a similar formula: Teigen makes her grand entrance, hears from the plaintiff and defendant, mercilessly makes fun of the bailiff — played by her mom Vilailuck Teigen AKA Pepper — and then tries to make a fair judgment. The staples of Chrissy’s Court are the unexpected pearls of wisdom and personal stories Teigen brings to every case. It’s her first time on the stand, but clearly not her first experience handling conflict.

“I’ve always been the mediator,” Teigen tells Bustle. “I’m in the middle [when it comes to] my kids, on the internet, or any fighting within the family, because I really always see both sides.”

In many ways, the show is an extension of Chrissy Teigen herself. Growing up, court dramas were a mainstay in her house (her mother has watched them since before she was born) and Teigen is obsessed with all things criminal justice. Since she first rose to fame as a model, TV host, and the unofficial "Mayor of Twitter," Teigen has been brutally honest about her life, her marriage, and her experiences as a mother.

"I spend my days talking sh*t on Twitter and watching reality shows and making fun of everybody, but that is not the same way I would talk to my best friends or give advice to John or my kids."

When I visit the Los Angeles set of Chrissy’s Court, she’s no different. A stream of quarreling couples and upset roommates present their cases to Teigen as she listens attentively, often devolving into fits of laughter. While she has an obvious talent for asking the hard questions, her severity is immediately offset by the fact that she's always poking fun at herself above all else.

“I spend my days talking sh*t on Twitter and watching reality shows and making fun of everybody, but that is not the same way I would talk to my best friends or give advice to John or my kids,” Teigen says, referencing her husband, the singer John Legend. “I definitely think I had more heart in the courtroom.”

When faced with cases centering on obvious mistakes or infidelity, Teigen is never judgmental. Instead, she's focused on mending the relationships at the heart of the conflict.

“When John and I get into arguments — and I am very passionate when it comes to fighting — you have to remember that after everything, it is just the two of you and you both want love and affection, you want to wake up happy and grateful,” she says. In this court, conflicts can be solved with simple advice: be direct, don't play games, and forgive those you love.