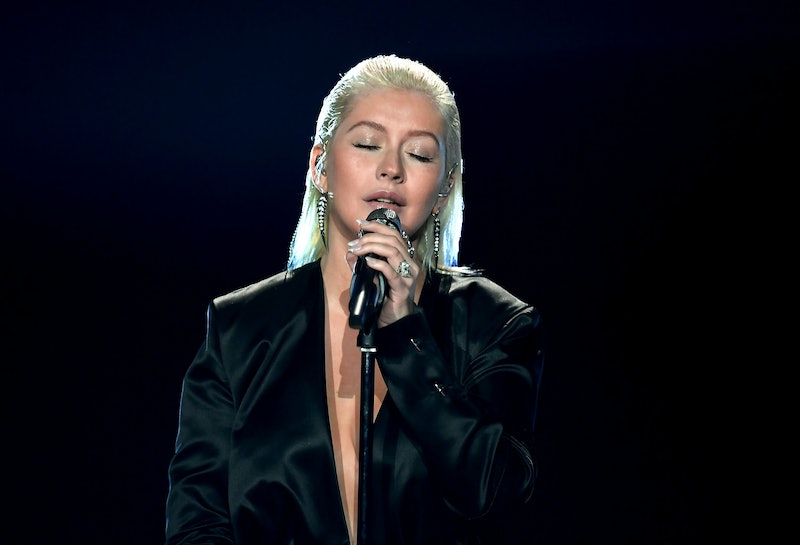 "Reflection," was one the very first songs Aguilera recorded as an up-and-coming pop artist, according to Entertainment Weekly, and the ballad about about finding your true self, showed off Aguilera's vocal abilities and set the tone musically and thematically for some of Aguilera's most powerful tracks later in her career, like the singer's 2002 hit "Beautiful." I mean, who hasn't done a hairbrush singalong to that song in their bedroom, belting lyrics like, "Who is that girl I see staring straight back at me? / When will my reflection show who I am inside?"

Aguilera and her unparalled powerhouse pipes dominated the musical landscape of the late '90s and early 2000s, but between her coaching duties on The Voice and caring for her two kids, Max and Summer Rain, her musical output slowed a little. Liberation is Aguilera's first new LP since 2012's Lotus, and the musician's fans took to social media to share their excitement for album's release on the anniversary of "Reflection," and celebrated Aguilera's 20 years in the music industry.

@irenek_90 tweeted, "Exactly 20 years ago, Christina released Reflection, the main theme of Disney's Mulan. 20 years later, she's still on top releasing one of her best albums ever," and @only1tonid said, "An icon from the first single! Back then, #ChristinaAguilera was questioning who the girl in her #Reflection was... twenty years later, she’s sharing her #Liberation and I still stan!"

@missciccone also wrote, "From 'Reflection' to #Liberation, I’m gonna celebrate @xtina’s 20th year career anniversary by listening to all her songs today. Which is what I do on a daily basis anyway."

The fact that Liberation was released on the 20th anniversary of "Reflection" could be just a coincidence; however, in a short film titled "Where's Maria?" Aguilera details the inspiration behind the album, and she may or may not have referenced her 1998 song. "I'm sorry to my own reflection, I'm sorry for putting you down. I'm sorry I struggle accepting the beauty that lies in myself," she says in the video, echoing the theme of the classic song.

It's quite possible Aguilera's "Where's Maria?" is referring to the beginning of her career as a singer, which in many ways began with "Reflection." Speaking of how she got her first record deal, Aguilera told EW in 1999 that she was chosen to sing "Reflection" because she could belt the song's high note. She said:

"My manager gives me a random phone call out of the clear blue one day while I’m just hanging out in my hometown of Pittsburgh. He's like, 'Can you belt the high E above middle C?' And now this is known as the note that changed my life, because basically I had to prove that I could belt this note - like, full-on belt it - by Fed-Exxing out, overnight, a karaoke tape of [singing over] Whitney Houston’s 'I Want to Run to You,' which has that note, just like 'Reflection.'"

Aguilera flew out to Los Angeles the next day and got the job right there and then, and RCA Records signed her to a contract a couple days later. Now two decades later, Liberation tracks like "Fall in Line" and "Twice," showcase Aguilera's sheer talent and power as a vocalist, which has always been one of her identifiers.

One fan, @KevvoAguilera, noted that Aguilera once again belts a high E on Liberation's "Unless It's With You," a full-circle musical moment for both the musician and her fans.

From "Reflection" to Liberation, Aguilera has secured a spot as one of this generation's most formidable and dynamic vocalists, and what better way to celebrate than listening to Aguilera's music — new and older — all day long. Here's to 20 more years.

More like this
The Spice Girls Just Dropped A Brand New Music Video
By Sam Ramsden
Everything To Know About Taylor Swift’s 10th Studio Album, 'Midnights'
By Grace Wehniainen and Jake Viswanath
How Ghosts Inspired Kesha’s New Music
By Jake Viswanath
Beyoncé’s Special Tribute To Sister Solange Was Both Touching & Hilarious
By Stephanie Topacio Long
Get Even More From Bustle — Sign Up For The Newsletter