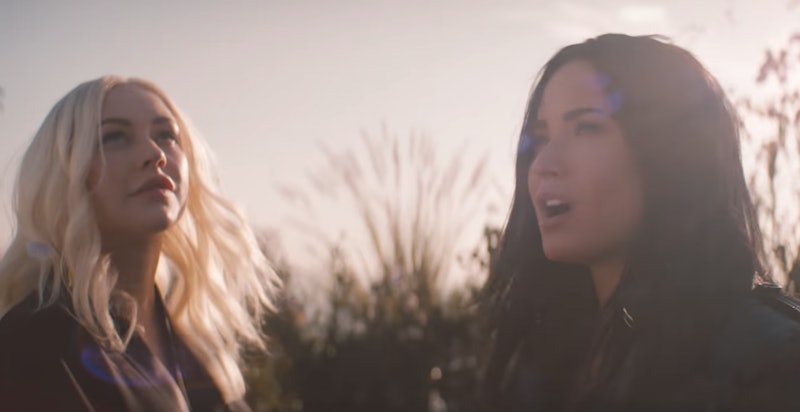 Ahead of her forthcoming album Liberation, which is set to be released on June 15, Christina Aguilera dropped a powerful new video that showcased a huge feminist message that fans are totally here for. The "Fall In Line" video features Aguilera alongside Demi Lovato, as their two characters seek to reclaim their respective freedoms in the world after being held captive for a very long time.

The video kicks off with two young girls playing around in a field until they're dragged away and thrown into a prison, where they're forced to sing and perform against their will. The clip, directed by Luke Gilford, progresses as the two youngsters grow into women who ultimately fight back. They're able to free themselves from the unwarranted captivity. Watching the video, it's clear to see that Aguilera and Lovato are taking a stance on the oppression of women, as the singers rise up against the guards in prison and return to the field where they once were innocent and unrestricted.

The duet is the latest track off Aguilera's highly anticipated album, following the release of "Accelerate," which featured help from rappers 2 Chainz and Ty Dolla Sign, and the ballad "Twice." According to Rolling Stone, the project is the former TheVoice coach's sixth LP and will become her first release in six years.

Although the "Fall In Line" opens with an address to "little girls," its strong and empowering wording offers a message that will appeal to women of all ages and backgrounds. In the first verse, Aguilera sings:

'Cause no one told me

But you deserve to know

That in this world, you are not beholden

You do not owe them

Your body and your soul"

Many were on board upon the video's release on May 23, taking to social media to express their thoughts on this liberating collaboration from Aguilera and Lovato.

Some fans even pointed out that Lovato used some of the same poses and movements in the video that she made while singing "This Is Me" in the movie Camp Rock. The moment caused many to wonder if Lovato was trying to throw shade at someone from her past affiliation with the 2008 Disney film. (However, until Lovato says otherwise, this remains fans' speculation.)

In the past, Lovato has spoken out about the downsides of being a child star, telling People in 2017: “I wouldn’t start that young if I could do it over again. It was a difficult transition from child star to transforming into a mainstream artist. It’s something that is very challenging.”

Meanwhile, Aguilera previously opened about her experience with domestic abuse as a child. Speaking to TODAY back in March, the mother of two explained how her past has helped her to become a better parent. She said,

"I made a decision very young that I would never put myself in a situation where I would feel helpless to a man and that I would be able to make money for myself and my future children so they wouldn't have to suffer at the hands of abuse."

Sharing words of positivity upon the single's release on May 16, Aguilera tweeted:

"To anyone who’s ever felt silenced and repressed, the truth seekers and bold thinkers… may you liberate your voice and break the mold, never back down, and never fall in line."

She also sent a message of thanks to Lovato for her participation on the song. Praising the singer while pointing out how their past personal struggles helped to make the song so special, Aguilera wrote on Twitter:

"I believe our paths were destined to cross & I'm so proud to come together from the pasts we’ve overcome; to the strong women we are today! You're truly a GEM, I have immense love & respect for you! You are an inspiration for future young girls of your generation. Beautiful work!"

The women performed the track this past weekend at the 2018 Billboard Music Awards, taking the stage with military-style dancers as they traded their amazing vocals skills back and forth.

On top of that, Aguilera announced her first tour dates in over a decade earlier this month. The tour kicks off Sept. 25 and will hit 22 cities along the way, according to E! News.

These women and their new video are the true definition of female empowerment and sisterhood. Both Aguilera and Lovato have great messages to share with the world, and it looks like this is only the beginning.

More like this
What Demi Lovato Really Thinks About Child Stardom, Depression, & Sobriety
By Radhika Menon
Lizzo Twerks While Playing James Madison's 200-Year-Old Crystal Flute Onstage
By Radhika Menon
Everything To Know About Taylor Swift’s 10th Studio Album, 'Midnights'
By Grace Wehniainen and Jake Viswanath
Twitter Is Freaking Out Over Rihanna’s 2023 Super Bowl Halftime Show Announcement
By Stephanie Topacio Long
Get Even More From Bustle — Sign Up For The Newsletter