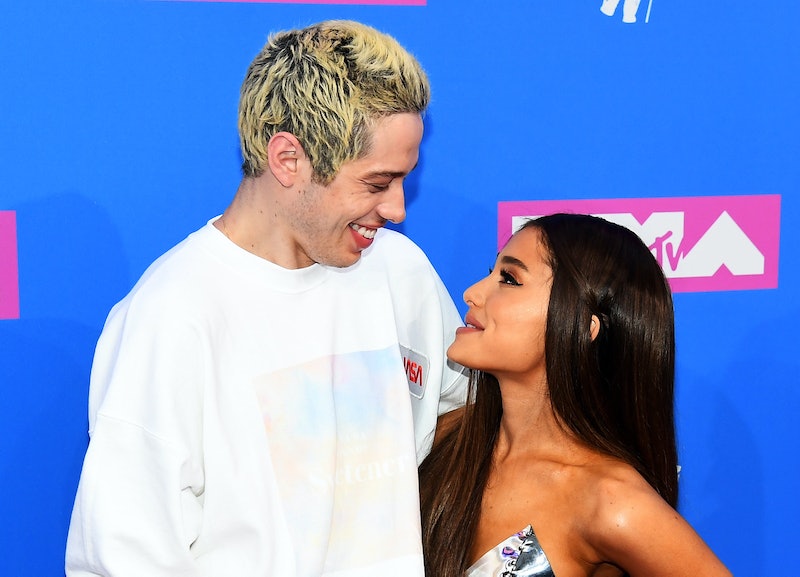 As you've probably heard and were suitably shocked by, Ariana Grande and Pete Davidson reportedly broke up over the weekend. While neither of them has confirmed the news themselves yet, there are a few clues about Ariana Grande and Pete Davidson's split, hinting things recently ended between the once-rock solid duo. (Bustle reached out to the pair's reps for comment on the breakup reports, but did not receive an immediate response.)

On Oct. 14, TMZ reported that Grande and Davidson parted ways and called off their engagement. While they may have broken up, the publication noted there's still love there, but the romantic nature of the relationship was over. Additionally, People confirmed the split with a source opening up about the state of the pair's relationship. Their unnamed source claimed, “It was way too much too soon," and continued, "It’s not shocking to anyone.” Following the news, Twitter naturally went wild, with many expressing their sadness over the situation.

However, it's worth repeating: Neither Grande nor Davidson have commented on the news themselves, with the "God Is A Woman" singer's first social media post following the news being an update on NBC's upcoming A Very Wicked Halloween: Celebrating 15 Years on Broadway production. Until they do comment, one can only speculate as to what's actually going on. But in the meantime, here are some clues that may give fans some insight.

Was this a sign of things to come? On Oct. 9, Davidson was spotted with his bunny tattoo — which was a nod to Grande's Dangerous Woman look — covered up by a black heart, per People. Some thought this meant things weren't looking great for the pair. But this actually might not have been too much of a smoking gun. After all, he did get it covered up with a heart along with an "A" (an obvious nod to Grande) right alongside it.

2. They Haven't Posted About Each Other Recently

Both Grande and Davidson were known for posting about one another on social media. However, as of late, there's been nary a pic posted of either on their respective pages. In fact, the Saturday Night Live star has even deleted his Instagram page, as pointed out by Daily Mail.

As for the "breathin" singer, the last photo she posted of Davidson came on Aug. 28. Of course, Grande did explain she was taking some time away from social media in September following a very emotional year, involving the Manchester bombing and the death of her ex-boyfriend, Mac Miller. But it's still notable how the social mentions of Davidson have been few and far between in advance of their supposed split.

3. Davidson's Jokes About A Breakup

Maybe Davidson's jokes held more truth than some initially realized. Prior to the breakup reports, there was more than one occasion where the SNL comedian joked about a future split with his fiancée. On the Sept. 29 episode, he said during Weekend Update, "Like, if we break up, and we won't— we will — but we won't. I'm kidding. But like, in 10 years if God forbid that ever happened, there will be a song called 'pete davidson' like playing in speakers at K-Mart and I'll be working there."

In an interview with Variety, published in August, Davidson also joked about a future split. "I'm still convinced she's blind or hit her head really hard," he said, "Something is going to happen, and she's going to be like, 'What the f*ck is this thing doing around?' For right now, it's rocking."

It's important to keep in mind that Davidson is known for his rather interesting sense of humor, and it's obvious he was just joking about a split. But in retrospect, these comments may double as a foreshadow.

4. Grande Took A Step Back From The Spotlight

As E! News noted, Grande pulled out of a charity performance on Oct. 13, the day before the news of the split came out. According to her manager Scooter Braun, who was at the event, the singer decided to focus on her own well-being. He told the crowd, "And you saw your invite, someone I'm very close to was supposed to come sing for you today, and because of things that she's going through, she couldn't be here today."

Obviously, Grande's well-being is what's most important. And if she felt the need to take some time for herself, whether that was stemming from a recent breakup or not, then she should definitely be supported in making that decision.

5. Her Brother Shared A Strong Message Of Support

According to People, Grande's brother, Frankie who is currently in Iceland, had a very telling message for his sister on Oct. 15. In an Instagram Story, he said, “Good morning to be beautiful, beautiful sister. I love you so much and you’re with me right now in Iceland. Listen!"

He then went into his own rendition of his sister's track, "breathin." "You know, you gotta keep on breathin’ — that’s true," he added in the short clip. That definitely sounds as though it could be some kind words of encouragement from the singer's older brother, especially in light of a potentially emotional breakup.

Given all of these clues, it does seem as though Grande and Davidson have parted ways. However, until the couple speaks out themselves, it's still just speculation.