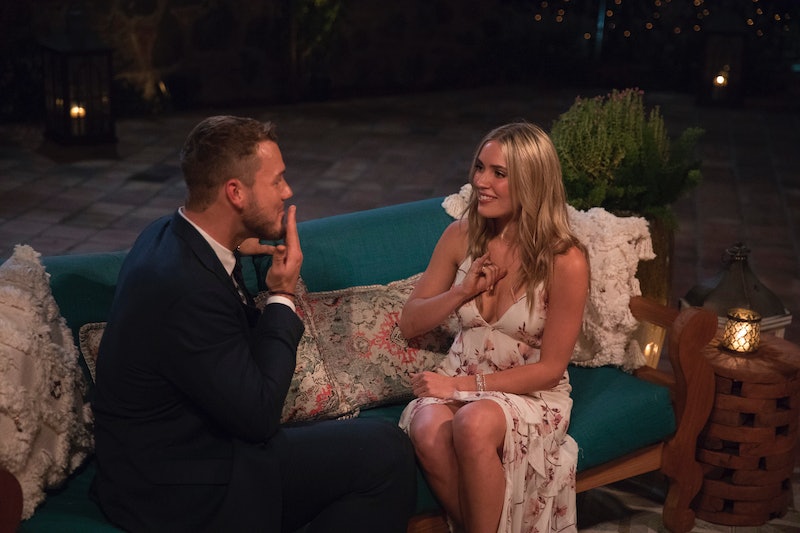 In just a few short episodes, Colton Underwood has a decision to make. With three women left on The Bachelor, fans are waiting anxiously to see if it'll be Cassie, Tayshia or Hannah who sweeps him off his feet at the end of this long journey. Each woman clearly has a connection with Colton, but for now, let's focus on all the clues Cassie wins The Bachelor. And, um, to be honest, there are kind of a lot.

First things first — they've been all over each other from the beginning. It's obvious from even the edited cut that makes it to TV — Colton can't keep his eyes off Cassie, and they share a kiss any time they possibly can. The chemistry is undeniable. That's not to say he doesn't have chemistry between the other women — he definitely does — but Cassie seems to have a special effect on him.

There's been skepticism surrounding Cassie's reluctance to tell Colton she's in love with him or confirm that she'd accept a proposal if it happens; some think it signifies she's not interested in him. But honestly, the fact that she's taking her time might be another clue she comes out on top. It shows, to some, that she's taking things seriously and considering their actual lives together further down the road — not just diving headfirst into an engagement for the sake of romance.

"honestly I think Cassie loves him the most out of all the girls there, that's why she's actually scared to be vulnerable and tell him how she feels. It seems like she's really taking it seriously and putting thought into the engagement rather than being like 'YES I'M 100% READY FOR MARRIAGE I SEE MYSELF WITH COLTON FOREVER' just to make it to the next week."

Not everyone is convinced, of course, but the point stands. And if other alums of The Bachelor are pulling for Cassie and think they see real feelings in her, well, that might be a clue in itself. Bekah's been on the inside, and her opinion could be telling.

There's also another big clue that eagle-eyed fans found outside of the show. Per Entertainment Tonight, Colton was seen leaving a gym with musician Jake Miller and actor Gregg Sulkin last week. The reason this matters? Sulkin is dating Cassie's sister, Michelle Randolph, who viewers met during hometown dates.

This seems like a doozy — why would Colton be hanging out with those close to Cassie's family if things have ended between them? This might be the biggest clue yet that Cassie and Colton are still in each other's lives long after filming.

Of course, maybe Colton knew Sulkin before he even embarked on The Bachelor — he has run in celebrity circles before. Maybe he even met Sulkin through Cassie, but only because they've remained friends after The Bachelor. We don't know! And we won't realistically have any answers until next week's finale. But no matter what happens, no one can deny that Cassie is one hell of a frontrunner.