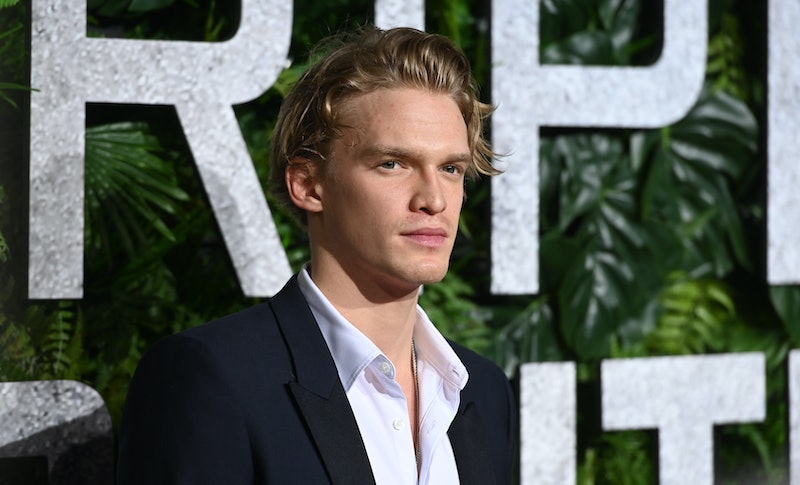 Not long after the "We Can't Stop" singer made — and then apologized for — some controversial remarks about sexuality, her new boyfriend Cody Simpson attempted to defend Miley Cyrus' comments by focusing on the romantic nature of their relationship. Because in Hollywood, what's more romantic than defending your significant other in a small scandal?

During an Instagram Live on Oct. 20 that she filmed with Simpson, Cyrus revealed that her "hardcore feminist vibes" made it difficult for her to "[allow] anyone in." She then told fans that "there are good men out there," adding, "You don’t have to be gay. There are good people with d*cks out there, you just gotta find them."

After social media users pointed out how harmful it was for Cyrus to tell fans that she "always thought I had to be gay because all guys are evil," the singer apologized for her comments on Twitter. "I was talking sh*t about sucky guys, but let me be clear, YOU don’t CHOOSE your sexuality," Cyrus wrote. And later, in an interview with The Kyle & Jackie O Show in Australia, Simpson attempted to clarify his girlfriends comments even further, explaining that she meant no harm. He also seemed to relate her comments to the claim that she had never experienced real romance before they began dating.

"I’m very, very, very romantic," Simpson said on the show. "She’d talked about how she hadn’t had that kind of experience in a relationship before." And when asked more directly about Cyrus' comment that he was the "only" good guy that she had ever met, Simpson said he was flattered by her comments and that it was a "nice" thing for her to say.

"I like to be the best boyfriend I can possibly be," he added. "Especially for her — she deserves that much." Simpson also referenced Cyrus' recent split from husband Liam Hemsworth and her subsequent rumored romance with Kaitlynn Carter, as part of his attempts to be romantic and gentlemanly, saying on the Kyle & Jackie O Show, "She's been through a lot this year and I was trying to be respectful of that."

While Simpson hasn't commented on Cyrus' sexuality — the singer came out as pansexual in 2015 — the singer herself has previously explained that being in a relationship with a man doesn't negate her "queer" identity. “What I preach is: people fall in love with people, not gender, not looks," Cyrus told Vanity Fair in February, explaining that her marriage to Hemsworth "redefined" what it looked like for "a queer person like myself to be in a hetero relationship.”

Despite her questionable statements on sexuality, it's clear from both Cyrus and Simpson's comments that their relationship is a new experience for both of them.

More like this
Twitter Is Roasting Liam Hemsworth Thanks To Miley Cyrus' New Song “Flowers”
By Jake Viswanath
5 Wild Theories About Miley Cyrus’ “Flowers” Music Video
By Jake Viswanath
"Lavender Haze" Star Laith Ashley Breaks Down Filming With Taylor Swift
By Jake Viswanath
Adam Lambert Called Out The George Michael Biopic Over Potential Casting
By Sam Ramsden
Get Even More From Bustle — Sign Up For The Newsletter
From hair trends to relationship advice, our daily newsletter has everything you need to sound like a person who’s on TikTok, even if you aren’t.