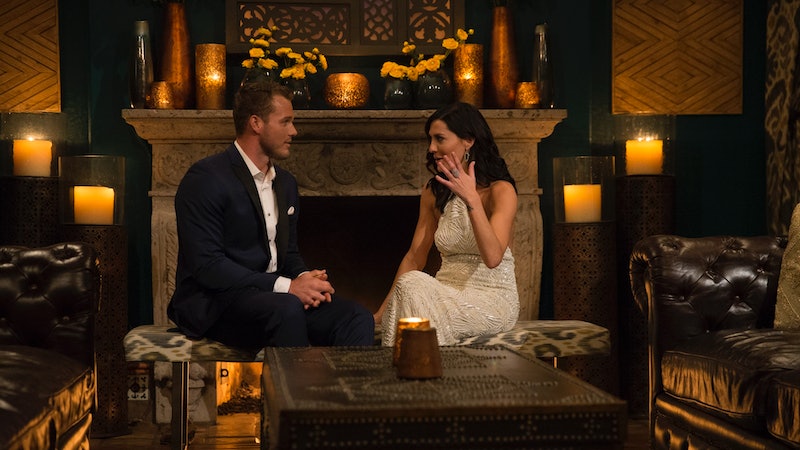 There aren't many thorns left on this final rose outcome. If you ever wondered if any ill will existed between Colton Underwood and his Bachelorette Becca Kufrin, in which he placed fourth, the answer is...none. Colton and Becca's Bachelor Nation friendship is going strong in the wake of their relationship on her season of The Bachelorette.

Of course, it makes sense that the two would be able to find a friendship with one another after all this time. Becca got engaged to Garrett Yrigoyen on her season finale. While Colton went on to lead his own season of The Bachelor where he rode off into the fence-paved sunset with Cassie Randolph. In a recent interview with Us Weekly, Colton opened up about how he keeps in touch with his former GF — and even revealed plans for a meet-up over the summer.

"She just moved to San Diego with Garrett recently," Colton told the outlet of Becca. "I'm having some people over next week, and I invited her and Garrett over. I'm very close with both of them. They're awesome people." (Honestly, who else is wondering what Becca and Garrett bring to a Bachelor potluck?) He added that his former Bachelorette had actually been a source of advice alongside his Bachelor Nation ~journey~.

Colton continued to the mag, "Becca was there to support me through sort of the ups and downs of it playing out in the public eye and really not knowing how to deal with it. She's been an awesome friend to me." In the aftermath of the absolute cringeyness involved in Hannah's breakup with her fourth place pick Luke P. during Men Tell All, it's super refreshing to see some exes get along super amicably.

Becca had also previously shared what keeps her friendship alive with Colton during an interview with Us Weekly. In terms of any awkwardness between these two, Becca revealed, "We're actually really close. We keep in touch. I think it's an easy dynamic. I think people think it's weird to stay friends with people you've dated, but it's been fine for us. We've stayed close with him since my season ended."

Colton also spoke to the outlet about their friendship during the same event, spotlighting friendships that aren't always shown in post-Bachelor life. "I just think it's like a dynamic after the show that not a lot of people realize," Colton shared. "You just go through something unique and then, you know, Garrett and I got along great. So it's just a friendship!"

Becca is also seemingly on positive terms with Jason Tartick, her third place pick. Jason is currently dating former Bachelorette Kaitlyn Bristowe. The blessing of Becca was bestowed upon the new couple, who have been going strong for nearly a year now. It just shows that a Bachelor Nation couple *can* move on in a friendly way post-show.

So, everything is coming up ~roses~ for Becca, Colton, and their respective partners in the time after their seasons. Is it wrong to wish for a Three's Company-style spinoff some day?