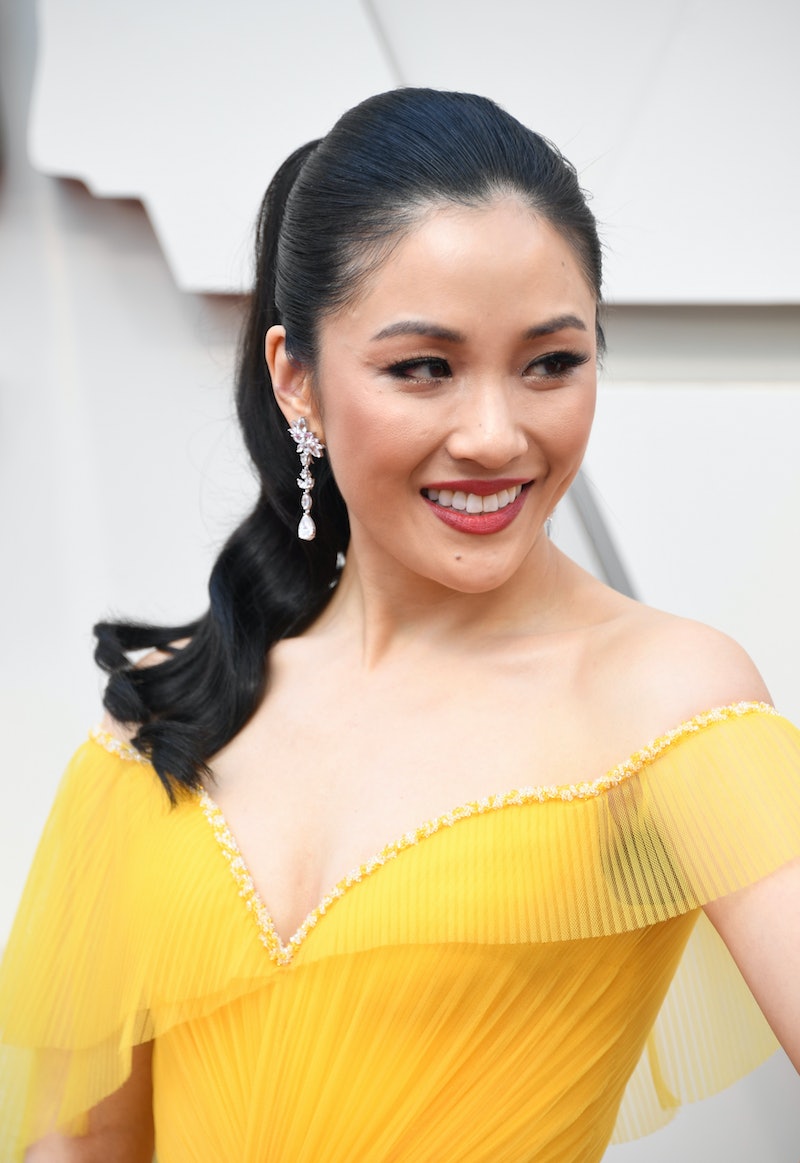 If you missed Crazy, Rich Asians in 2018, now may be the time to finally watch the film. Not only has the movie received glowing reviews, but it's also racked up tons of award nomination Constance Wu's 2019 Oscars outfit/dress proves that she came to celebrate the film's success.

When it comes to the biggest hits of 2018, Crazy Rich Asians definitely makes the list. The film, based on Kevin Kwan's book of the same name, has an impressive 91 percent fresh rating on Rotten Tomatoes and is the highest grossing romantic comedy in a decade, according to Variety. The movie's cast hasn't just been popular with audiences, though. They've been critical darlings as well. Wu garnered not one but two acting nominations for her role in the film at both the Golden Globes and Screen Actors Guild Awards, and the full cast received a nomination at the SAG Awards as well. Plus, the film also scored a Best Picture nomination at the Golden Globes.

Despite this, Crazy Rich Asians was completely left out of the Academy Award nominations which led some to consider the omission a snub.

The film's lack of nominations, however, has not stopped Constance Wu from being invited to present at the 2019 Oscars. Prior to her gig as a presenter on stage, she totally crushed the carpet.

Tonight on the Oscars red carpet, Wu looks gorgeous in a flowing, yellow, custom Versace gown. With her hair in a chic ponytail, a subtle red lip, and glittering diamond accessories, this is definitely one of the best looks of the night.

Wu was one of the first people to hit the red carpet on Sunday night, yet fans on Twitter were instantly adding her to their personal Best Dressed lists.

While Wu and Crazy Rich Asians were not nominated for any awards at the 2019 Oscars, that hasn't stopped the film from receiving critical praise as well as love from fans. In fact, the film has already been granted a sequel.

Author Kevin Kwan's Crazy Rich Asians is actually the first of of trilogy of books. The sequel is entitled China Rich Girlfriend, and the final book is Rich People Problems. According to The Hollywood Reporter, the second book is on it's way to become a sequel film. In fact, director Jon M. Chu is returning as well as screenwriters Peter Chiarelli and Adele Lim. While the Oscars may not have acknowledged the first film, audiences and other critics have now made the China Rich Girlfriend happen.

According to Deadline, filming for the sequel isn't slated to begin until 2020, but Marie Claire does report that China Rich Girlfriend is set to be shot alongside the third book's adaptation which means while fans have a while to wait for the sequel, the time between the second and third films won't be as large.

While the film may be sans nominations this year, the sequel films do represent another opportunity for the stellar cast (including Wu), screenwriters, and director to garner honors from the Academy. While their omission this year may sting for fans of the movie, there's much more to come and hopefully many more appearances by Wu and her cast on red carpets.