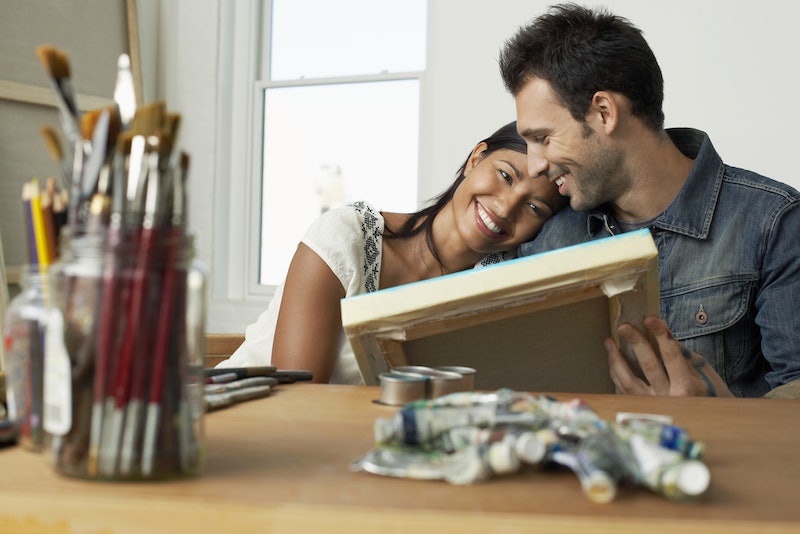 When you’re in a relationship, you and your partner probably have various ways of bonding, whether it’s making dinner together or having regular date nights out. Now, a new study out of Baylor University found that couples release oxytocin when creating art or playing board games — and one gender may do so more than the other.

The study found that when painting, men released twice as much, or more, oxytocin — also known as the “love hormone” — than females. “This suggests that some types of activities may be more beneficial to males than females, and vice versa,” Karen Melton, Ph.D., assistant professor of child and family studies in Baylor’s Robbins College of Health and Human Sciences and one of the study’s researchers, said.

Researchers also said they thought that the couples painting would be less attentive to their partners; however, the painting couples reported more touching than those who played board games. “We were expecting the opposite — that couples playing the board games would interact more because they were communicating about the games and strategies, or because they were competing, and with more interaction, they would release more oxytocin,” Dr. Melton said. “Typically, an art class is not seen as an interactive date with your partner. But sometimes couples that were painting turned the activity into a bonding time by choosing to interact — putting an arm around their partner or simply saying, ‘Good job.’” She also said that their big finding was that all the couples released oxytocin when playing together. “[…] That’s good news for couples’ relationships,” Dr. Melton said.

Kryss Shane, dual licensed social worker and leading LGBT expert, tells Bustle that the study’s findings aren’t surprising. “The increased oxytocin levels are likely due to the sharing of an experience, which typically brings couples closer together,” she says. “Regarding men releasing more oxytocin while painting, this is likely due to the generalized expectation that men are supposed to be competitive, and yet here, there were no life or death stakes, nor was there any real reward to a positive result.” So, she says, this is an experience more familiar to women — who often socialize in non-competitive ways — and the behavior of sharing a new experience likely increased the bonding hormonal reaction in men.

Melton and Maria Boccia, Ph.D., professor of child and family studies at Baylor’s Robbins College of Health and Human Sciences, and one of the researchers, had twenty couples aged 25-to-40 participate in the study. Then, they were randomly assigned to a game night or art class for an hour. While one group of couples played board games alone in a familiar home-like setting, including games such as Monopoly and cards that didn’t require them to read instructions, the others did a painting classes for couples at a community art studio. The latter was made up of two groups of five couples, and their task was to paint a simple beach scene with their initials in the sand. To reduce interactions between the couples, the instructor had prepped the canvases in advance.

Participants’ oxytocin levels were tested via urine samples before and after the activities, and couples also completed a six-item survey about their familiarity with the activities and their communication, touch, and eye contact with their significant others during the hour. Unlike other studies, in this one, researchers did not ask participants to perform specific actions, such as hand-holding.

The study, Examining Couple Recreation and Oxytocin Via the Ecology of Family Experiences Framework, appears in the Journal of Marriage and Family, the journal of the National Council on Family Relations. Researchers said the study is the first to examine how distinct types of leisure are associated with oxytocin release. They also stated this shows that the environment impacted oxytocin levels — couples in a unique setting and activity released more oxytocin than those in a familiar home-like environment. Even though the release of oxytocin increased most for men in the art class, this was followed by women playing board games, women in the art class, and men playing board games — but the latter three groups did not vary much from each other.

The study, however, did not focus as much on LGBT couples, and Shane says the results may have been different if it had. “There are sometimes less gender role normalities within LGBT+ couples, because these pairings often require couples to create their own norms,” she says. “This is due to a lack of LGBT+ role models in the media in the previous generations, as well as a lack of LGBT+ role models within many of their fictive families.” This could then lead couples to choose to mirror their partnerships as closely as possible with heterosexual relationships, which would increase the likelihood that the results would be similar — or they could choose very different partnership norms, which could decrease the likelihood that the results would be similar, Shane says.

In addition, she says the results could be impacted by whether the community art studio was known to be safe or unsafe for LGBT+ people. “This would impact how much couples could focus on the experience and one another versus how much of their energy had to be geared toward being prepared for an unsafe situation to occur at any time,” she says.

“This has implications for the everyday family — to find those small, meaningful ways to interact when they’re eating dinner together or going for a walk or doing homework with a child or sitting on their couches with their iPad,” Dr. Melton said.

All in all, next time you and your partner are trying to come up with a fun date idea, perhaps you’ll want to increase your oxytocin levels and try a fun new activity.