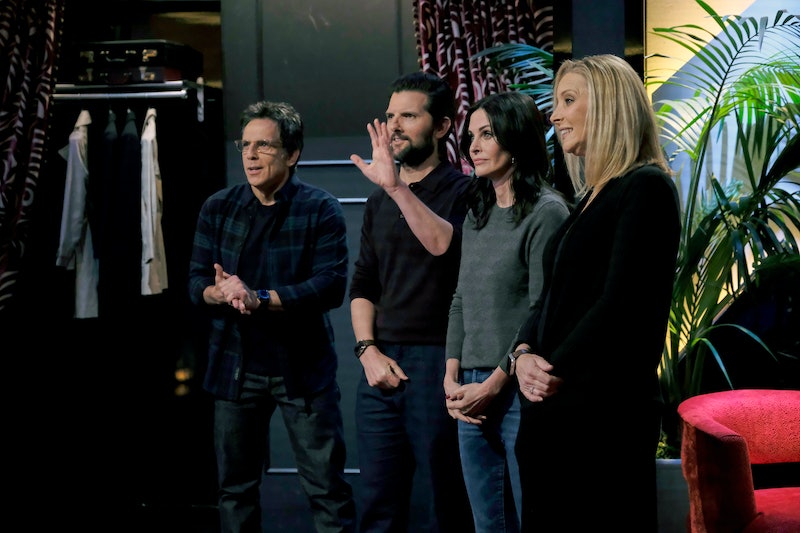 HBO Max’s Friends reunion special may be delayed amid COVID-19, but there's a new program that will tide Central Perk patrons over in the meantime: Courteney Cox and Lisa Kudrow will reunite for Celebrity Escape Room, a new NBC special scheduled for Red Nose Day. The special, set to premiere on May 21, will follow Cox and Kudrow as they join forces with Adam Scott and Ben Stiller to get out of an escape room under the careful watch of the outlandish and menacing game master, Jack Black.

“It’s a battle of wits: you against the room,” Black, who also serves as executive producer, announced in the trailer. As Scott noted, “He is diabolical.” As for the escape room settings the comedians will need to, well, escape, a high school hallway, an outdated living room, and a gymnasium filled with balloons (and explosives) are shown in the trailer. “The moment I walked in, I was scared, then I remembered Jack was in charge, and I got really scared,” Cox said. Kudrow added, “I don’t remember anything ‘cause there were loud noises, and it gave me amnesia.”

Celebrity Escape Room will kick off a three-hour block of programming for Red Nose Day, NBC’s annual campaign to raise funds for child poverty through entertainment. Past sketches include Red Nose Day Actually, the mini sequel to Love Actually, and One Red Nose Day and a Wedding, the Four Weddings and a Funeral reunion special.

Cox and Kudrow’s reunion comes after HBO Max confirmed in April that the highly-anticipated Friends reunion special would be delayed due to the global health crisis. Initially slated for a May release date, the reunion will be an unscripted special with stars Cox, Kudrow, Jennifer Aniston, David Schwimmer, Matthew Perry, and Matt LeBlanc coming together to reminisce about the hit sitcom. The special has been delayed, but at least fans will get this mini reunion. And all 10 seasons of the series will still arrive on HBO Max once the streamer launches on May 27.

As for how the cast has been passing the time amid production shutdowns, Cox dialed into Jimmy Kimmel Live! in late March and revealed she was binge-watching Friends in quarantine. "People love the show so much, [so] I decided to binge watch Friends,” she told Kimmel. “It's really good!" Cox added, “I have such a bad memory. I remember obviously loving everybody there and having fun and I remember certain times of my life I was there, but I don't remember episodes."

Tune into Cox and Kudrow's reunion on Celebrity Escape Room and more Red Nose Day programs on NBC on Thursday, May 21 at 8 p.m.